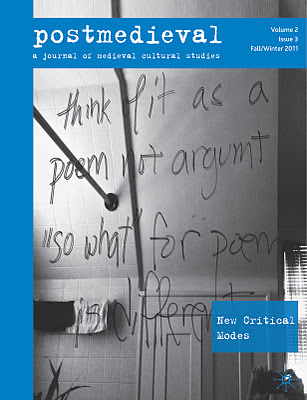 The idea for ‘New Critical Modes’ was born in the good company of a bottle of sauvignon blanc in Kalamazoo. It burgeoned through e-mail exchanges that became blog posts. The project was from the start gregarious: of and for flocks (and, inevitably, the occasional shepherd or wolf). We structured this collaboration as a communal experiment, a textual laboratory for intensifying creative strains within contemporary academic writing, even as we have tried not to lose sight of the precariousness of both creativity and community, both of them so easily taken for granted as objects of knowledge. (In other words, we have never really believed in the well-worn modernist imperative to make things new, even as we have never really abandoned our sense that things are always -- always -- in the process of being made new.) We therefore encouraged the resuscitation of outdated forms, experiments in voice, manipulations of genre and ruminations upon the possibilities yielded by new media. We wanted this issue of postmedieval to examine and embody some of the novelties (flavors of the week, even) that have been emerging among contemporary medievalists. Just as importantly, we wanted this issue. It was – and is – an object of no small desire.
--Jeffrey J. Cohen and Cary Howie, "Editors' Introduction: Novelty"
Myra Seaman and I are thrilled to announce the release of Volume 2, Issue 3 of postmedieval: a special issue on New Critical Modes, co-edited by Jeffrey and Cary Howie. I'm particularly happy about this issue because of its experimental nature: the authors gathered together herein -- Brantley Bryant, Catherine Brown, Jeffrey, Cary, myself, Anna Klosowska, Karmen Mackendrick, Carl Prydum III, and Daniel Remein -- have endeavored to either try out different [not necessarily new but not necessarily conventional] forms of so-called "scholarly" writing [the abecedarium, the antiphon, the interview, the confessional essai] or to think about and propose new modes of reading [manuscript-thinking, vicarious causation, "evential" hermeneutics, literature as transport, break, and reprieve, criticism-as-flirting], or even to ruminate what "novelty" itself supposedly means. The issue also includes a book review essay by Sharon Kinoshita, "Re-Viewing the Eastern Mediterranean," that reviews books that challenge "the grand narratives of nationalist histories and Western Civilization alike," revealing "the unruly multiplicity of eastern Mediterranean texts, artifacts, and cultures in the very period usually taken to epitomize the east-west, Muslim-Christian clash of civilizations. For readers interested in cross-cultural and cross-confessional relations, they make clear that the kinds of political negotiations, cultural dynamics, and accommodationism long ascribed to Muslim Iberia and Norman Sicily find ready counterparts in the eastern Mediterranean, in ways that could not be more relevant to ‘contemporary events, issues, ideas, problems, objects, and texts’."

It should also be said that this issue has been an endeavor of friendship -- between Jeffrey and Cary, but also between the contributors, and between the contributors and the editors. Another way of putting this would be to say that this has been an experiment in a public form of amity, of wanting something together, which can only be an ambivalent desire at best. Or as Cary writes in his essay, with reference to that striking act in Chretien's "Knight of the Cart," when Lancelot does the unthinkable by stepping into a horse-cart, normally reserved for thieves and murderers, in order to have a "means of transport" for pursuing the kidnapped Guinevere,

It may be useful, on the one hand, to think about how Chrétien's text disorients our sense of everyday verbs, most crucially ‘monter,’ to climb, to mount, to board: an ordinary thing – think of the stairs you may have climbed today – but suddenly a world-changing one, a world-shattering one. If to become univocally visible, to become visible as a knight of the cart, is to have climbed up onto something, an ascent that is also, socially, a more striking descent, are there ways of transfiguring that movement so that it opens onto other figures? Can we ride this out together?

Three of the essays in "New Critical Modes" [by Brown, myself, and Remein] will be open-access for a limited time, and you can access those plus see the full Table of Contents here:

Here, you will find whales and projective verse, a rumination on the "time" of the academic, a conversation about medievalist blogging, flirting as a "critical mode" that looks "over the shoulder" of the writer, the four elements [water, air, fire, and earth] as methods of thinking, speculative vitalism, reading as an inhuman adventure, the medieval as a sign and excuse for "getting carried away," the idea of the new as "the same as the old without a first," and the "flex-point" of manuscript space-time. It may be that each and every essay contained in this issue is something like a failure in the sense of "omitting to perform something due or required," and maybe also because, in the most faithful attempt to try something out --literally, to essay -- we faltered a bit, and also given the length restraints of the short essay, we ran out of time. Or as Catherine writes in her essay,

Before a paper's ready, you have to do a lot of prep work. Afterward, you can ignore it or destroy it or file it away. But for now, the point is: Get the ideas where you can put your hands on them. Use the back of an envelope, a bar napkin, a blackboard. Leave yourself a voicemail, use an app, just get it out, get it down, in a form that can be touched, seen, heard – even smelled or tasted, if you can make that happen. Even if you lose the notes, your hands will remember the writing.

The twist here is: we put the ideas where you [the more general "you" that lies outside of the more intimate 2nd-person "you" Catherine invokes in her essay] -- our readers -- can put your hands on them, and perhaps "ride this out" with us. And please do.
Posted by Eileen Joy at 4:28 PM