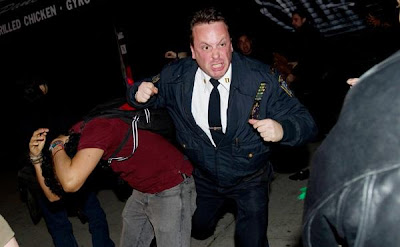 by KARL STEEL
Not exactly a medieval post, which means this isn't really my métier...

Horrified to wake up today to see that Bloomberg has ordered an overnight police raid on Occupy Wall Street. The 5,000 books in the OWS library: dumped. Destroyed [edit at 4:15pm Nov 15: actually, not destroyed. The City really screwed up in not making this information public as soon as possible edit again at 12:21 PM Nov 16, actually mostly destroyed]. Bloomberg gave (is giving?) a press conference, not so much to justify his decision (since, for the powerful, as we know from Marie's fables, the act itself is the justification) as to offer the public the proper narrative. Here, he is saying, is how we must understand. Here is what we must know. Hail to/from the Chief!

He is saying this (which I learned about via here):

At one o’clock this morning, the New York City Police Department and the owners of Zuccotti Park notified protestors in the park that they had to immediately remove tents, sleeping bags and other belongings, and must follow the park rules if they wished to continue to use it to protest. Many protestors peacefully complied and left. At Brookfield’s request, members of the NYPD and Sanitation Department assisted in removing any remaining tents and sleeping bags. This action was taken at this time of day to reduce the risk of confrontation in the park, and to minimize disruption to the surrounding neighborhood.

To reduce the risk of confrontation. Shades of "It became necessary to destroy the town to save it," no? I'm put in mind, too, of the appalling narrative offered by University of California Police Captain Margo Bennett, whose forces, acting with the at least implicit approval of UC Chancellor Birgeneau, assaulted students and professors. Captain Bennett (caput! yet another head!), had this to say for/to us: "I understand that many students may not think that, but linking arms in a human chain when ordered to step aside is not a nonviolent protest."

Right. On the question of confrontation and violence, here's some material from my book, edited a bit:

Slavoj Žižek's Violence: Six Sideways Reflections distinguishes between subjective, objective, and symbolic violence. Subjective violence, violence as it is typically understood, is committed by a “clearly identifiable agent” an individual murderer, an anthropophagous pig, a 70-year-old poet, and so forth whose act disturbs the supposedly peaceful relations of the status quo. Objective violence is the systemic and generally unacknowledged violence by which the status quo sustains itself, committed as a constitutive element of the “objective” status quo itself. Finally, symbolic violence is the violence of language, which distinguishes one subject from another (and thus renders a nonnarcissistic relation between subjects possible). My thinking with Žižek’s terms could, in fact, start with his own work. When he asserts that, because they possess language, “humans exceed animals in their capacity for violence,” he decides as confidently as any humanist that animals lack language, and, like any humanist, he sustains that difference by ranking human lives above animal lives: through the subjective violence of his own carnivorousness (exemplified by his notorious assertion that vegetarians are “degenerates . . . turn[ing] into monkeys”); through the objective violence of exercising the privilege of being human in a system that fundamentally values human life more than anything else; and finally through the symbolic violence by which he not only articulates a distinction between subject and world (a necessary activity for any thought capable of acknowledging others as others, for better or worse), but also posits an abyssal difference between animals and humans. All these violences work in concert to generate the human and the animal.

Later in the book, I consider Ratramnus of Corbie's Letter on the Cynocephali (treated by me here some years ago). Ratramnus proves that the Cynocephali, the monsters with human bodies and dogheads, are human, because they domesticate animals. Though they wear hides, the flayed skins of their dead animals, and though "suisque cogant imperiis subjacere" (they compel them to submit to their rule), Ratramnus explains “At vero cenocephali, cum domesticorum animalium dicuntur habere multitudinem, eis minime convenit bestialis feritas, quorum animalia domestica lenitate mansuefiunt” (but since the cynocephali are said to keep a multitude of domestic animals, then animal fierceness does not fit them, because they tame their domestic animals gently).

Gentle Compulsion! Here's what I said:

No matter how gently Ratramnus claims it is enforced, Ratramnus has not purged violence from the subjugation of animals: he has in fact preserved its aspects of mastery for his newly named humans, while attempting to displace the violence from the enactors onto the “fierce” victims. To recall Žižek’s distinction again, Ratramnus’s attention to the subjective violence of the domesticated animals masks the objective violence of cynocephalic—and, by extension, human—ascendancy. Typically, the mask is a symptom, in this case, of Ratramnus’s wish to elude his own knowledge of the impossibility of being human. The cynocephalic head, terrifying, carnivorous, yet in the place of reason, materializes the ineluctable and dehumanizing violence of the human condition. Like any human, the cynocephali must dominate animals; but to do so, and thus to claim reason for themselves and deny it to animals, requires violence; but to be violent means acting like a beast. Without “bestialis feritas” there is no claim to possess reason, and thus no claim to be human; but neither is there a human with it.

Hail to the chief with a dog's ravening head!

Thanks for the post, Karl!! Here's Rei Terada, with insightful things to say on the category of the "not non-violent" -- http://workwithoutdread.blogspot.com/2011/11/not-non-violent-civil-disobedience.html.

I hope today turns out to be an occasion for public expression& action on behalf of our freedoms of speech and assembly and protest. Your post is a pretty good start.

The destruction of books is a clear sign to me... but then it was also a clear sign a decade ago when an attack on this country was used to curtail civil freedoms, wiretap, etc. The historical parallels are terrifying, but they've been pointing in a clear direction for a while.

Your friendly neighborhood East European who believes that history repeats itself.

Thanks for the link Julie. Sharing your hope (especially as Alison--who, unlike me, doesn't have a stack of papers to grade, a noon appointment with my chair, or an evening class to prep for [my excuses? my job?]--has just set out for Manhattan to join in).

Irina, thanks also. Oddly (?) appropriately (?) enough, I read your sign off as "SIGHED, Your friend etc."

Thanks for this thoughtful post, Karl, tracking as it does the trope of nonviolence rendered violence in order to be violently contained.

The situation, the rhetoric around the dismantling of the protest, the destruction of peaceful dissidence and property and a library for crying out loud: what have we come to?

Thanks, Karl, for the onsite update. As a New Yorker exiled to the Midwest, Occupy Wall Street has been one of my last hopes that we may someday live in a just system. (I know, silly and naive, but I need these hopes: I live next door to a cop whose tea party signs are aimed at our kitchen window. And I spend most days thinking that Margaret Atwood has access to the future. Hope is nourishment.)

Thanks for this post, Karl; these events really sadden me.

The resistance is exhilarating. To me, writing from a distance in Brooklyn, while talking every half hour with wife--who's been down there for about 5 hours now--what strikes me is the astonishing majority of people on twitter etc who find Bloomberg and Wall Street's tactics appalling. I think people really DO want Democracy in this country (and elsewhere), but I wasn't so sure about it until #ows started.