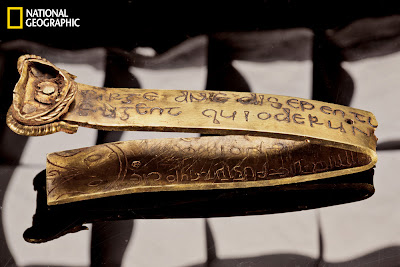 Figure 1. A strip of gold once studded with a gem bears the same biblical quotation in Latin on each side: Moses' declaration, "Rise up, Lord, may your enemies be dispersed and those who hate you flee from our face," as the Israelites journeyed out of Sinai. The object may have decorated the arm of a cross prized by recent converts to Christianity. All artifacts owned by: Birmingham Museums and Art Gallery; Potteries Museum and Art Gallery, Stoke-on-Trent (from the Nov. 2011 issue of National Geographic; ©Robert Clark/National Geographic)

We did, of course, back in 2009, report on the discovery of the Staffordshire Hoard [go HERE, HERE, and HERE], and now National Geographic has come out, in its November 2011 issue, with a richly illustrated article on the discovery, "Magical Mystery Treasure," which I think our readers may be interested to read HERE. Here is an excerpt:

The Staffordshire Hoard, as it was quickly dubbed, electrified the general public and Anglo-Saxon scholars alike. Spectacular discoveries, such as the royal finds at Sutton Hoo in Suffolk, had been made in Anglo-Saxon burial sites. But the treasure pulled from Fred Johnson’s field was novel—a cache of gold, silver, and garnet objects from early Anglo-Saxon times and from one of the most important kingdoms of the era. Moreover, the quality and style of the intricate filigree and cloisonné decorating the objects were extraordinary, inviting heady comparisons to such legendary treasures as the Lindisfarne Gospels of the Book of Kells.

Once cataloged, the hoard was found to contain some 3,500 pieces representing hundreds of complete objects. And the items that could be securely identified presented a striking pattern. There were more than 300 sword-hilt fittings, 92 sword-pommel caps, and 10 scabbard pendants. Also noteworthy: There were no coins or women’s jewelry, and out of the entire collection, the three religious objects appeared to be the only nonmartial pieces. Intriguingly, many of the items seemed to have been bent or broken. This treasure, then, was a pile of broken, elite, military hardware hidden 13 centuries ago in a politically and militarily turbulent region. The Staffordshire Hoard was thrilling and historic—but above all it was enigmatic.

Some stunning photographs of the hoard's contents, by Robert Clark, also appear in the November 2011 issue of National Geographic in which this article appears, and can be accessed HERE.
Posted by Eileen Joy at 4:41 PM