What if Derrida's cat had been a worm? Or coffee cup? And Derrida a table? 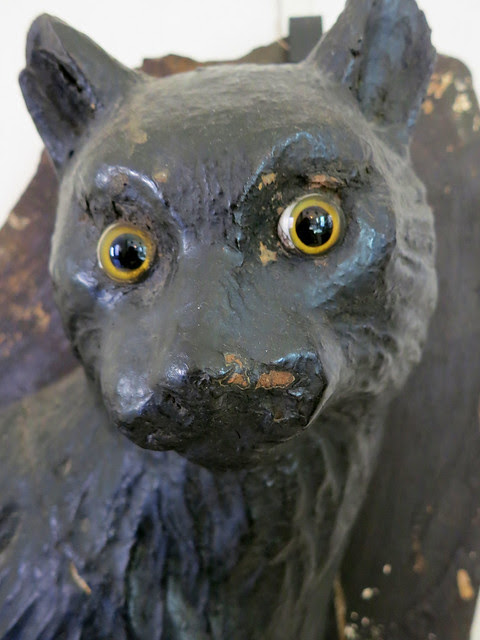 This Thursday I'm flying from Paris to State College, PA, for Robot Weekend: Being Human Gizmos," where I'll do my wormy song-and-dance. The conference starts with Anthony Clarvoe's new play, Gizmo, which is fantastically good. I'm just thrilled to have been invited. I'd be thrilled, even more, if any inhabitants of Happy Valley (and I don't mean Bhutan and its disreputable happy valley) saw fit to show me some of your fabled American hospitality. I hear you people drink glasses of cow milk. That'd be kind of fun to see.

I'll be giving a version of my ecomaterial worms paper, starting with a question about Derrida, a cat, and worms. It goes like this:

At least for me, critical animal theory's ur-moment is Derrida's naked encounter with his cat [in case you doubt it: see Gerald Bruns in On Ceasing to be Human; a lecture by Carla Freccero; Erica Fudge; Laurence Simmons in the Knowing Animals anthology; and several blog entries -- this last one rather more close to home than the others]. The cat comes across Derrida just as he's emerged from the shower, and, so far as Derrida thinks, looks at his penis. From here, we get Derrida feeling ashamed, and a bit ashamed of his shame; we get a sketch of philosophical distinctions between self-aware nudity and unwitting nakedness, and from there, of course, another of Derrida's dismantling of the pretensions of the humanist tradition. To suspend or refuse human domination, to break with what he calls carnophallogocentrism, Derrida lets himself be “seen seen” by his cat. He allows himself the uneasiness of being caught in his own cat's eyes; he lets himself stay uncertain; and he opposes those who take “no account of the fact that what they call 'animal' can look at them, and address them from down there.”
What addresses him is his cat, not, he tells us, “the figure of a cat. It doesn't silently enter the room as an allegory for all the cats on the earth.” It isn't here “to represent, like an ambassador, the immense symbolic responsibility with which our culture has always charged the feline race.” Maybe. No doubt Derrida was fully cognizant of this maybe. As several other people have observed about this scene, cats are particularly useful for troubling humanism. A cat isn't just any old kind of animal. They're independent, nocturnal, clever carnivores we want to let stay with us, who kill without our supervision and often without our approval. A dog just wouldn't have been as uncanny.

A cat is apt, yet there's only so far it can go in troubling humanism. We've long set aside a place for them. Like a dog, a cat's familiarity makes it easier than it would be with other critters to recognize the vulnerability that humans and nonhumans share. Recall what Derrida did with Jeremy Bentham's question about nonhumans, not whether they can speak, or reason, but whether they can suffer. Derrida finds in these questions the “nonpower at the heart of power” of being unable not to exposed to suffering or at least to vulnerability. It's relatively easy to think of sharing this condition—crucially, not a capacity—with a cat. It's not hard to hear an ethical call from a cat, because who wants to hurt a cat? Who wants to let a cat be hurt? When Derrida talks about the injustice of human dominance, many of us will look at our cats and say, "I would never lord over you, bub, never," or even, "if it came to it, I'd let you have the last spot in the lifeboat."
But what if the cat were a maneater? I asked this question on Facebook, and someone quipped “it would have eaten his penis!” No surprise, Derrida doesn't forget this. He talks about the cat's looking at him “without touching yet, and without biting, although that threat remains on its lips or on the tip of its tongue.” That's it, though, and I don't think any of us seriously thought Derrida's cat would castrate him.
Unless you're a mouse or a songbird, or, like me, very allergic, a cat's not much of a threat. Being a medievalist, though, I can't help but wonder about anthropophagous animals, because my literature's full of them. There's the baby-eating pigs of the animal trials; there's the whale that swallowed a fisherman named Within, who, before he's freed, has to endure an eleventh-century analog of Who's On First. There's Partonopeu, who goes out into the woods hoping to be eaten by bears and tigers, and Ortnit, sucked out through his armor by baby dragons. How would our thoughts about vulnerability and ethics change if Derrida's cat had been the lion that ate Ignatius of Antioch or the butchering boar of the Avowyng of Arthur?

Even so, maybe not much would change. Critical animal studies and animal rights philosophy both demand we reconsider the relative value of human and nonhuman lives. It's not easy, but it's less hard to do with charismatic megafauna, a category in which I think we can safely place whales, bears, tigers, lions, and maybe even baby dragons. But what if our anthropophagous animal didn't have any eyes? What if it had been a worm, or a mess of worms? A cat is uncanny, but there are animals far, far more unhomely, namely, worms, the paradigmatic anthropophage in medieval literature, where we humans are all “food for worms” (see, e.g., the Cerquiglini-Toulet here).
====
That's where my introduction stops. Having just read Ian Bogost's Alien Phenomenology (discussed by Levi Bryant here and here), I can now imagine taking things in a radically new direction. What if Derrida's cat had been, not a worm, but, say, Levi's blue coffee mug? And what if Derrida had been a table? What if we had (because we've now become Graham Harman), on the one side, cotton and, on the other, fire? The first objection--cotton can't see!--is the easiest to brush aside, since 'seeing' might be read as just a particular kind of apprehension or engagement whereby a subject (whether human, ceramic, or cotton) becomes an object to another (whether cat, Formica, or fire). Seeing of course has its own history and physiology, but there's no good reason to elevate it above other modes of apprehension or engagement.
More tomorrow, maybe? When I might dig into Bogost's diggings into the problems of object-oriented ethics in his section on "Metaphor and Obligation."
Posted by medievalkarl at 9:13 AM

Note: obviously I need to play around with 'unsubstitutable singularity.' Easy to think that with a cat; harder to do it with a bunch of worms. Which either means we need to work harder when it comes to worms, or that the issue of singularity maybe isn't the best framework, or the only framework, for thinking these issues, whatever these issues are.

encumbered by cucumbers, as the joke goes. a great image.

Pic. of Anonymous, aliens and singularity made me think of this picture of "the revolting 'Doctor Who' monster that terrified tourists."

It also links at the bottom in most read news, to one of the most sinister cutest cat pics I have seen. I prefer the wormy, tentacle thing as an object of wonder.

p.s My view for what it's worth on singularity in a non-Derrida context, is its good to avoid singularity as I think it is easy to give the impression of/ or project modern species concepts on to medieval material.