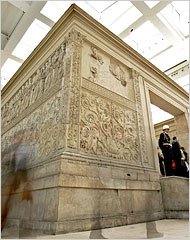 The New York Times article on the controversy surrounding the exhibition of the Ara Pacis reminds me that I have something to be relieved about.

Every year the 3rd grade at Kid #1's school does a Wax Museum. This does NOT mean, like in that old Vincent Price horror film, children are dipped in hot wax. Students dress in period costumes and, when visitors press a button next to them, they recite the biography of the figure they are impersonating.

It was a foregone conclusion that Kid #1 would be a Roman emperor. Imagine my joy when he announced that he was not going to be Nero or Caligula (as I would have guessed) but Caesar Augustus. I asked him if that meant he was hoping for eventual deification as well; he remains undecided on that subject.

Now if only his father could get over his obsession with all that is unsavory about the Middle Ages.
Posted by Jeffrey Cohen at 12:48 PM