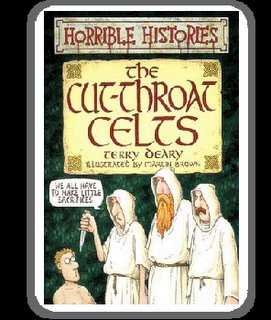 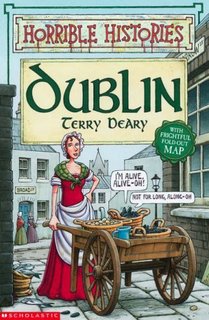 The price any parent pays for travel is that the progeny will, upon your return, demand gifts. One of the many reasons I love having a nine year old boy is that anything I buy him, toy or book, will also be used by me.

My favorite finds for Kid #1 during my recent sojourn to Ireland are three books. Two are from the Horrible Histories series (see this post if you want to read about how the Horrible Histories nurtured his unhealthy interest in Caligula and Nero). The Cut-Throat Celts describes all kinds of gruesome activities among those "tribes" ("The Celts decapitated their victims. What did they do with all those heads?")... but my favorite part is the account of Irish saints. Sample:

Saint Brigit: Brigit's crosses are still set up on farmland in Ireland to protect crops and animals. This is because she used to punish people who stole her cattle by drowning or scalding them. She didn't have [Saint] Winifride's problem of princes chasing her because she made herself ugly by putting out one of her eyes. Horrible Joke: Why was Saint Brigit like a lonely teacher? Because she only had one pupil.

The second book I brought home is from the same series, and provides a quick and snarky history of the city of Dublin. Sample paragraph:

Another horror story was that Dermot [MacMurrough, 1110-1171] gathered a pile of enemy heads after a battle and spotted the head of man he really hated. What did he do next?
a) spewed
b) chewed
c) glued
Answer: Dermot sank his teeth into the face and tore at it. [This information is accompanied by an illustration of a severed head with bite marks in the appropriate place. A thought bubble coming from the head declares "He had a bit of cheek!"]

These are English books, and an American child would have to know some Britishisms (like the double meaning of cheek) to get all the jokes -- many of which involve hapless pensioners -- but the volumes are, all in all, great fun. And a kid could accidentally learn something along the way.

The third book I grabbed is children's science fiction, and utterly fascinating: Philip Reeve's Mortal Engines. Who wouldn't be entranced by a book that opens with the sentence ""It was a dark, blustery afternoon in spring, and the city of London was chasing a small mining town across the dried-out bed of the old North Sea"? I don't think I'm giving too much of the plot away in mentioning that London is a populous city creaking its way across an apocalyptic landscape, and that the mining town -- its hapless prey -- is toast.

And what did Kid #2 get? Not the Horrible Histories Toddler Edition (still waiting for that; I'd really like to know the nasty side of Thomas the Tank Engine), but a stuffed bear from Aillwee Cave, famous for its hibernation pits and bones of Ursos Arctos. [She cared nothing about where it was from, and simply calls the thing "Hugga Bear"].
Posted by Jeffrey Cohen at 8:47 AM

I adore the Horrible Histories. I brought scads of them home from Ireland!