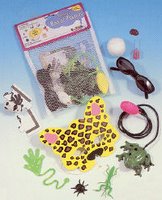 The seder plate is ready to be loaded with its Very Symbolic Items. Our copy of My Favorite Family Haggadah is good to go. Elijah's cup awaits its wine. We even have our bag of plagues to liven up Pesach (Favorite plague from this bag: the "cattle plague," a plastic cow with eyes that ooze when you squeeze it).

Now that Kid #2 is two years old, she will be able to engage in the seder in a way that she couldn't previously: in past years her participation was mainly limited to spitting matzoh out of her mouth and vocalizing loudly when the food took too long. I've been thinking a lot about rituals that will acknowledge a little better the presence -- and importance -- of this little girl. Miriam's cup, I know, is often used alongside Elijah's goblet to honor the role of a women not only in the biblical story but in Jewish history more generally. Miriam is an attractive figure for inclusion, too, because she is one of the few women in the bible who is not most noteworthy for her role as wife, lover, or mother: she is the sister of Moses, the architect of his survival, a jubilant musician, a leader of women in song, dance, and prayer.

We will have Miriam's cup on our table tonight. But I've also been contemplating a way to honor a woman from the Moses story who has faded -- almost -- to oblivion. Zipporah the Midianite was the wife of Moses and the mother of his two sons. Though descended from Abraham, the Midianites were frequent enemies of the Jews, even the objects of genocide; they were supposed to be polytheistic as well. In the Middle Ages Zipporah was often held to be an Ethiopian (or Cushite; it's a legend based on an obscure biblical passage, and sometimes this dark-skinned spouse was thought to be the second wife of Moses). A non-Jew, perhaps a nonbeliever, annexed to a narrative that is not her own, Zipporah seems to me like so many of the women we medievalists know well from our reading: women who ubdoubtedly possessed rich histories and vibrant lives, but who now survive as a tantalizing fragment of stories untold.

As a figure for all those whose lives pass unrecorded Zipporah deserves remembrance.
Posted by Jeffrey Cohen at 8:35 AM

Another tradition I like is the orange on the seder plate. For many people this fruit is supposed to commemorate the place of women in Jewish ritual and history, but its origin is in a desire to include lesbians and gays at the seder table (and in Judaism more generally).

And thank you for making sure your ritual is so inclusive: that warms the cockles of my heart.

Of course, so does your making us aware of toy cows that ooze from their eyeballs.