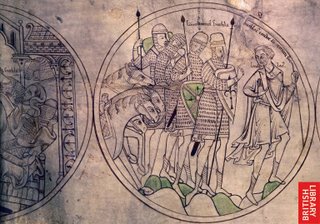 Here, in response to the discussion in the "Fantasies of the Aboriginal" post, is an excerpt from Medieval Identity Machines on the Anglo-Saxon saint Guthlac and the subjugation of the Britons. It's taken from a chapter ("The Solitude of Guthlac") on the legends as Mercian literature in which the saint's celibate body becomes a figure for the emergent kingdom itself. In the book I then try to read the Guthlac stories against the saint and with the demons, arguing that the model of identity at work between holy man and monsters is a dispersive one.

(The above image depicts Guthlac departing from the warband he once commanded. Inspired by heroic legend, Guthlac had attempted in his youth to become another Beowulf, but he eventually left that martial world behind to become a swamp-dwelling hermit. The picture above is much later, c.1210, but suggests how alluring the story was for centuries thereafter. It's from the Harley Roll Y. 6 and can be found here)
------------------------
Writing in 1868, Charles Kingsley envisioned in the Anglo-Saxon saint Guthlac a progenitor of the "fenmen sailing from Boston deeps" who "colonized and Christianized [the New World] 800 years after St. Guthlac's death." Just as the crowning achievement of the saint's descendants in England was, according to Kingsley, the founding of Cambridge University, their latter day feat of heroism was the erection of Harvard University on converted barbarian shores (The Hermits 308-12).

Kingsley's colonialist fantasy of continuity between the settling of the Fenlands and the colonization of North America is in some ways a logical extension of the medieval trajectory of the Guthlac legends. The demons detest this saint, after all, not for his holiness but because he has seized their dwelling place, their long-held territory (Guthlac A 205-13). Both Felix's Vita Guthlaci [the earliest account of the saint's life, written in Latin] and the Old English poem Guthlac A are texts obsessed by the annexation of new land and its conversion into secure possession. Laurence K. Shook argued in 1960 that the hill in the fens for which Guthlac battles its resident demons represents "all that is significant in the spiritual life of the good Christian … [The poet's] use of the barrow removes it from the category of a mere geographical appendage to a religious theme." Like the formalistic analysis to which Guthlac A has been frequently subjected, theological interpretation like this has its value, but (as Karl P. Wentersdorf has observed) the poem "is more than an Anglo-Saxon Pilgrim's Progress." Despite its potential abstraction into universalizing Christian allegory, the fenland promontory which Guthlac settles also remains a "geographical appendage" which is marked -- like Guthlac himself -- by a particularly Mercian history. Guthlac's settlement of the hill is described by the old english poem in deliberately multivalent terms:

The undiscovered place stood known to the Lord, [but] empty and uninhabited, far from ancestral domain [ethelriehte ], awaited the claim of better guardians. (215-17)

In language of impending, fortunate discovery and subsequent legal possession, the passage envisions a promised land that lies fallow (idel), awaiting new masters to transform its empty wildness into inheritable domain (ethelriehte ["ancestral land"] is used in the Old English translation of Exodus to describe the Promised Land).

Guthlac's struggles unfold in the Fenlands, the vast expanse of peat, silt, uplands, and islands which formed a crescent of wilderness around the Wash. Guthlac's colonization of the demon's cherished home (the tumulus or beorg specifically, but the Fens more generally) reenacts in miniature the dispossession of that very territory by the numerous Northern peoples who, beginning in the fifth century, sailed to Britain and remained in the region. Bordering important Mercian settlements, the fens had been occupied centuries before the arrival of the northerners by Celtic peoples, many of whom had ancient histories of resistance against attempts at displacement. About a hundred miles from Crowland, for example, an area not far from Norwich had been christened by the invading Romans Venta Icenorum, "marketplace of the Iceni." As is the case with all too many of the British peoples whose names are mentioned (and Latinized) by Caesar and Tacitus, very little is known about them, but famously among their number was Boudica (Boadicea), the rebel queen who led a Celtic alliance against the Roman annexation of Britain, reducing the colonia of Colchester and the trading town of London to ashes.

Romans and Romanized Celts had successfully settled much of the fens, draining marshy expanses for agriculture, industry, and habitation. With the withdrawal of the Roman legions, however, the area became once again swampy and sparsely inhabited. In the Fenlands of the eighth century, the kingdom of East Anglia rubbed against Mercia and formed a borderland which may have harbored an as yet unassimilated British population. Yet even if the entire population of native Britons had been displaced or (more likely) absorbed into "Anglo-Saxon" polities long before Guthlac's arrival, his battles against the demons enacts in the Fens a struggle taking place on the other side of the kingdom of Mercia, a martial engagement in which he himself had been involved as a young warrior.

The eighth century Mercian hegemony was marked by its great battles over land, with Mercia finding the limits of its westward push at that border where Offa erected his dyke. Felix clearly had the ongoing wars against the Britons in mind as he composed the Vita Guthlaci. In describing the Brittones as "the implacable enemies of the Saxon race [infesti hostes Saxonici generis], troubling the nation of the English [Anglorum gentem] with their attacks, their pillaging and their devastations of the people" (XXXIV), Felix was able to construct a flattened, pan-racial "Anglo-Saxon" identity for the island (Saxonici and Anglorum appear to be synonyms here). In providing a common enemy, that is, Felix's Britons also construct a shared sense of "English" race subsumable under the Mercian body of Guthlac, who at first as warrior and later as saint battles this threat to the cohesion of gens, natio, theod.

In a particularly striking episode of what Alfred P. Smyth describes as ethnic hatred, just as the Welsh are invading Mercia from the west during the reign of King Coenred, a crowd (tumultuantis turbae) of demons impersonate a band of British marauders and set fire to Guthlac's dwelling, attacking him with spears. Guthlac chants a psalm and the demon-Britons vanish velut fumus, like smoke (XXXIV). Two points are central here. Language rather than dress or bodily appearance characterizes these Britons; Felix says that Guthlac knows these marauders by their "sibilant speech," and the Old English translation of the Vita sancti Guthlaci goes so far as to label the chapter Hu tha deofla on brytisc sprÃ¦con, "How the devils spoke in Brittonic." Second, Guthlac recognizes this linguistic difference immediately because it is also a part of him, the forced learning of a time spent in captivity among the Britons during his days as a warrior. That Mercia might ingest formerly British lands while their inhabitants simply vanish velut fumus would have been a powerful and attractive group fantasy. Yet Guthlac's implicit recognition is that brytisc is an unassimilated remainder within his "pure" body. An otherness which can return to haunt, it reminds of a history of violence, gestures toward troubling fragmentations and internal differences. Celtic-speaking peoples within and at the edge of Anglo-Saxon collectivity offered a pointed challenge to Mercia's imagining itself as a homogenous community, to declaring the island an unambiguous ethelrieht.

Like the Briton episode from the Vita Guthlaci, Guthlac A is suffused with colonial desires, displacing into religious history a version of the engagement which was then occurring as martial history. The vastness of the fen was once wholly occupied by the demons (143-44), and the mound upon which the saint settles may, as in Felix's account, be a topography marked by multiple colonizations. After Guthlac removes the demons from their last remaining dwelling, the land belongs to Mercia. His settlement enacts a fantasy of manifest destiny, displacing the ethnic violence at Mercia's border to an internal space where a triumph can be spectacularly staged over external and internal difference simultaneously. Representing the Britons as banished demons and Guthlac as a man singularly in possession of himself offers a culturally useful fantasy of a male body whose identity is uncomplex, internally imperturbable. Guthlac's stabilitas -- his immobile, granite-like, and unconflicted subjectivity -- embodies everything Anglo-Saxon England in general and eighth century Mercia in particular as potentially corporate identities were not.
Posted by Jeffrey Cohen at 6:51 AM

Thanks so much for posting that excerpt! Your reading makes sense of what was for me only an inchoate half-thought about the Guthlac vita. I'm putting Medieval Identity Machines on my summer reading list.

By the way, two summers ago I visited Crowland and the ruins of the abbey (part of which is an operative parish church -- with the longest bell hand-pulls in England!). The manager/warden (I'm not sure what his title should be) was very bitter that the British Library had the Guthlac roll and they only had a facsimile. He felt that Crowland's heritage had been robbed. An ironic footnote to your reading, wouldn't you say?

It's amazing, you always get the best feel of a Very Historic place from its living (weary, cranky, but eager to talk) custodians. I love stories like this one -- thanks!