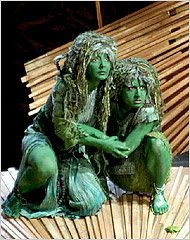 The poet Glyn Maxwell has written a play about them. Here's an excerpt from a review in today's New York Times:

Set in 12th-century England during a civil war never precisely explained, "Wolfpit" tells the fantastic, quasi-historical story of two children, colored green from head to foot, who suddenly appeared in a field at harvest time, dressed in garments of unfamiliar material and speaking an unknown tongue. The boy, who refused food other than green beans, retained his skin color and died, while the girl accepted other food, turned "sanguine" and became an object of avid male attention. The plot's chief concern is how this disturbance lays bare the surrounding characters' hypocrisy, selfishness, greed and general turpitude.

The play has a flash-heavy website, wolfpit.org
Posted by Jeffrey Cohen at 6:33 AM