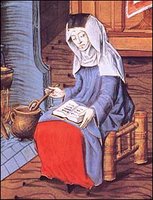 Here is a section from a paper I gave a while ago to the Medieval Club of New York. It's based on the Kempe chapter in my book Medieval Identity Machines, but tries to do a bit more with "Jewish" as a possible performative (and challenging) category in late medieval England.

---------------
Margery Kempe was obviously not Jewish. She was baptized a Christian and remained one faithfully throughout her life. Yet I wonder if Margery Kempe isn't Jew-ish. Kempe escaped constriction, escaped every identity that was thrust upon her. Her line of flight was composed of pure sonority, and by that I mean an escape from linguistic signification, from the prison of words tied to specific and inalterable meanings. I call this process the becoming-liquid of Margery Kempe, her self-dissolution into an embrace of sound, a flow of tears. This eruptive voice is connected to Kempe's obsession with storms. It is not only that her thunderous screams signify through sound but not meaning, just like Hebrew to the Christian ear (or eye, in manuscript illustration), but that her exorbitant mode of being allies her with the Jew as represented in early fifteenth century England. Energetically anti-Semitic, Margery Kempe in some ways deeply resembled that which she despised.

I begin with a scene from a drama that Margery Kempe may have witnessed in 1413, the year we encounter she and John on their home way from York drinking beer and posing hypothetical questions about their marriage (her husband asks "Would you have sex with me if a man threatened to decapitate me?" She, of course, answers that she would not.) When in the course of the York Cycle of Mystery Plays "The Death of Christ" is staged, the audience witnesses a Christian performing the role of a crucified Jew who speaks for the only time in his life Hebrew -- or, rather, a mixture of Hebrew and English:

These dying words are taken from Matthew's gospel, which in the Vulgate likewise quotes and translates the Hebrew [Mark has it in Aramaic]. I'd like to begin by asking what this Jewish Hebrew sounded like to the Christian audience that heard it. Was the immediate gloss understood? How many auditors were like Caiaphus, who in the play cannot comprehend what these alien sounds signify, but realizes their power? Ruth Mellinkoff has detailed the centrality of untranslatable Hebrew (the letters of which were often represented pictorially by "Hebrew"-style nonsense) to Christian fantasies of Jewish identity (Outcasts : Signs of Otherness in Northern European Art of the Late Middle Ages ). Kempe is a figure who likewise found herself labeled an outsider because of the alien sounds which issued from her mouth, someone who could not (like the Christ of the York mystery play) assimilate herself into Latin discourse (his last words are not Hebrew or English but simply in manus tuas ).

As Carolyn Dinshaw has so persuasively argued, Margery Kempe is queer, with all the suggestions of perturbing sexual alterity which cling to that term. The adjective "queer," moreover, fits Kempe's "wondirful," astonishing, unnatural voice better than her body, for it likewise "knocks signifiers loose," touches bodies, "making them strange." Eve Sedgwick answers the question "What's queer?" by comparing institutionalized heterosexuality to Christmas. Both "events," it should be noted, leave someone out: the queer, the Jew. These two familiar strangers have often been conflated, perhaps because they stand in extimate relation to the dominant. Both are disruptive, perhaps intolerable Others integral to the construction of homogeneity within the community which excludes them. Could Kempe's queer voice also be called Jewish?

Kempe is clearly not a Jew. Her devotion to Christ's passion is proof enough of her Christian orthodoxy. The Jewish population of her native Lynn had been exterminated in 1190, when a riot against them ended in massacre and conflagration. If any individual Jews returned thereafter, they were expelled from England a century before Kempe was born. She does, however, frequently speak of Jews. She codes condemning voices as Jewish, a semiotic maneuver that allows her the historical position of the persecuted Jesus (44). Her frequent prayers are directed toward the conversion of "Jewys, Sarazinys, and alle fals heretikys" (57), expressing the Christian desire for a universality that would do away with the "errant" differences of Judaism, Islam, and nondominant Christianities. Her vision of the Passion includes Jews who treat Jesus "so fowle and so ven[ym]owslych" that she weeps (79). Jews even replace Romans at the crucifixion, rending his garments and nailing Christ's body to the cross.

The adjectives "cruel" and "cursyd" are the most frequent modifiers of the noun "Jewys" in Kempe's Book. During her vision of the crucifixion, for example, both the Virgin and Kempe curse the Jews for their wickedness with just those adjectives. When the Jews reply to the grieving Mary, their voices are described by a familiar adverb: "And than hir thowt the Jewys spokyn ageyn boystowsly to owr Lady and put hir away fro hir sone" (80). When the Jews answer back, their voice echoes "boystowsly," without reported verbal content; their voice, rather than their hands, seems to be the force which moves Mary from her dying son. "Boystows" is, of course, the very adjective which Kempe deploys repeatedly to describe her own voice as a disruptive, astounding sonic flow capable of moving bodies and perturbing communities. Could Kempe's voice be "boystows" in the same way as that the voice of the Jews is "boystows"? The thunderstorms with which Kempe forms her sonorous alliance suggest this possibility, bearing with them as they do suggestions of the biblical voice of thunder which echoes throughout the books of Exodus and Job as the God of the Jews speaks to his chosen people; the God of the Christian bible never speaks in thunder.* Oddly enough, Kempe is even accused of being a Jew at one particularly fraught moment in the text. In the city of York, a place where she has experienced "gret wepyng, boistows sobbyng, and lowde crying" (51), Kempe is asked during the archbishop's interrogation "whedyr sche wer a Cristen woman er a Jewe?" (52). Used loosely, "Jewe" of course means something like "heretic." Yet at the same time, underneath its metaphorization, "Jewe" always also uniquely signifies a racialized, traumatic body for English Christendom, and empty and excluded place around which Englishness itself perhaps formed.

Kempe's exorbitant voice structurally places her not only in a queer relation to dominant meanings and institutions, but also in a disjunctive position similar to (though certainly not identical with) the inassimilable Jew: an intractable outsider in the midst of medieval community, an inexcluded Other whose recalcitrant, "untranslatable" Hebrew likewise figures the limits of linguistic universality and limns the Christian possible. Sylvia Tomasch has argued that the Jew was "central not only to medieval English Christian devotion but to the construction of Englishness itself," especially after the Expulsion. If Englishness is catalyzed around an empty space, that of the absent Jew, then any identity challenging to this new cohesiveness risks become Jew-ish, Jew-like.

Yet unlike this "virtual" or "spectral" Jew who figures so prominently in Kempe's own rhetorical construction of Christianity, Kempe attains for her voice both authority and power, at least for a brief period in the fifteenth century, and for the past few decades of our own era. Through the force of her "boystows" flow of tears and cries, Kempe moves into the position of the sexual, social Other, but in precipitating new kinds of community refuses the possibility – the thinkability -- of an identity-sustaining alliance with those racial, religious Others with whom she is already queerly close. Kempe does not recognize the Jewish timbre of her voice. By closing off further irruptions of alterity, Kempe constricts her Christian selfhood and leaves unquestioned the place of the Jew within it.

That Kempe's experiments in identity could disrupt sexual and social borders but stop at the barrier of race is not surprising. Medieval Christian identity was sustained by elaborate, seemingly intractable racial fantasies centered upon the supposed absolute otherness of Jews and Saracens. Margery Kempe did not recognize the voice of the racial other echoing within her own, but that does not mean that she could not.

---
*Kempe's anxious obsession with thunderstorms is displayed throughout her book, often linked to worries over and triumphs of her own voice and authority. It is surprising that more people haven't remarked on it.
Posted by Jeffrey Cohen at 10:53 AM

I read this argument in Id. Machines and liked it there, too. No time or energy to write something substantial, but I wonder if you've read:

“There are perhaps those for whom the matters on which Margery Baxter and the rest were examined—the Real Presence, tithes, pilgrimages, images—are live and compelling issues; for the rest of us, there probably can be at most a raw feeling of solidarity with one or another side. While I would not choose to be without the feeling, I cannot pretend that I share Margery Baxter’s beliefs any more than I share Bishop Alnwick’s, or that she would feel anything but patronized by a sympathy that puts aside the beliefs that were for her the point of dissent; and I cannot in any case imagine that my sympathy does her any good. If as historians we cultivate sympathies, we should in all conscience admit that it is ourselves for whom we cultivate them . . . we ought not to pretend that our work is on our subjects’ behalf, or that it is in any direct or unambiguous way political; it is perhaps at most a cultivation of the soul” (26).

I offer this argument--surely very much an articulation of/against the early 90s--not against yours, which is cognizant of what Justice cautions, but against the probability of my unanalyzed sympathies for MK.

But if we want to worry Justice a bit here, too, I wouldn't stand in anyone's way.

I would say, worry him. I take his caution to heart -- one wouldn't want to identify with a medieval heretic say, or with her persecuators ... but I think that's very different from forming an alliance with such a person. Dinshaw is good at articulating this strategy in a way that doesn't throw caution to the wind.

I think 'Eli, Eli' is Hebrew, but 'lama sabachthani' is Aramaic.