Thank goodness he blacked out after one drink. 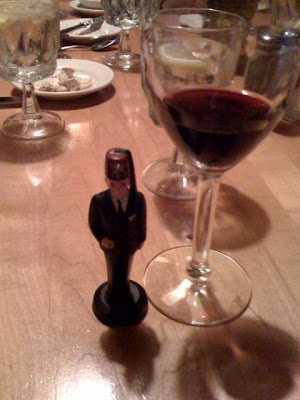 Despite what you might have read at Gawker, we ITM co-bloggers actually enjoy each other's company and don't refer to each other via abusive epithets when out of ear shot. (While it is true that I call Karl "The Scold," I call him that to his face. He has in fact been quite scoldy to me this conference).

We ITMers and a cohort of our BABEL supporters had dinner together last night. The repast commenced badly, with the Tiny Shriner demanding quite imperiously
He also kept winking at Eileen, and I could tell she was getting very uncomfortable -- he muttered something about being better than any damn gnome. Tiny then went on to lecture us about how our readership isn't as high as it could be, how our posts are predictable and do not feature Tiny Shriners nearly enough, how if he hears one more time how much we love each other he is going to hurl Tiny Chunks all over our oven roasted garlic appetizer spread. When he began t 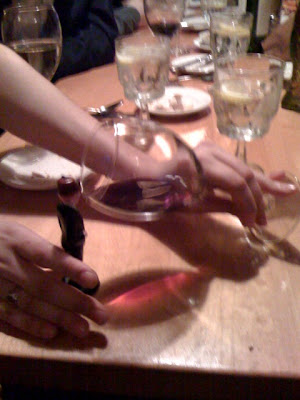 o implore us seriously to start featuring "All Naked Tiny Shriner Tuesdays," we knew we had to act.

MKH gave him a glass a wine. He drank with gusto, reeled for a few minutes, and .... well, let's just sa 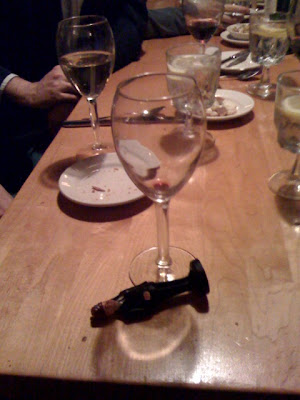 y that dinner was a lot quieter after that.
Posted by Jeffrey Cohen at 6:26 AM

eep! *than* the early modern conference blogging, than

That's what I get for commenting before coffee.

Stranger, agreed. But more fun as well, we hope.

The Tiny Shriner is a handsome little man. Too bad he can't hold his booze. I had a brief mental image of drinking him under the table like Karen Allen in Raiders. It was amusing.