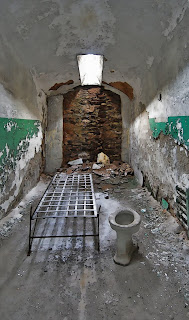 One of the books I picked up at Kzoo was an anthology of hagiography and miracles by Aelred of Rivaulx, The Lives of Northern Saints. Here we can find his version of the life of Ninnian, stories of the miracles of the saints of Aelred's ancestral home, Hexham, and what I present to you here, the miracle of the Nun of Watton.

Some of you, perhaps most, undoubtedly already know the story. Those of you who don't, hold onto your cowls and grip your soft bits: a Gilbertine nun, admitted as an oblate somewhere around her fourth year (and we might better say: abandoned to the nuns by her father), never quite takes to the calling. No wonder: there's doesn't seem to have been any institutional support in this convent for oblates (see Boswell 310 n50). She grows up to be flirty, dirty-minded, and, inevitably, she gets mixed up with a fellow--a conversus (lay brother?) a canon?--who rapes her. Their relationship, such as it is, continues, and, when she discovers herself pregnant, the man runs off. She's beaten, imprisoned, and fettered by her scandal-fearing sisters, who top the torture off by compelling her to betray her lover, such as he was. When he's been captured, he's brought before his lover, who--again, under compulsion--castrates him. After the sisters throw the bloody penis in the chained sister's face, they drive the castrate out.

My summary leaves a lot out.

EDIT: several years later (like, just shy of EIGHT YEARS), it's just come to my attention that some fellow, who characterized this as a "fashionable" blog, is eager to demonstrate that the nun is NOT raped, and that her mouth is stopped to keep her from crying out in her pleasure. Here's the Latin: "Egreditur, et quasi columba seducta non habens cor, mox accipitris excipitur unguibus. Prosternitur, os ne clamaret obstruitur, et prius mente corrupta carne corrumpitur" (PL 195:792C). The first sentence is an allusion to Hosea 7:11, in the Douay Rheims translation, "And Ephraim is become as a dove that is decoyed, not having a heart: they called upon Egypt, they went to the Assyrians." It's a bizarre chapter in a bizarre book, not easy to understand. What's needed is a bit of a dig into the exegetical history of the passage. Aelred is, indeed, unclear about precisely what's happening or why; and indeed he may be alluding to "covering the mouth of the wicked"; but it's undeniable that there's no small element of violence implied in this passage. Whether Aelred believes that this is violence against the monastic order, or violence against an individual woman is truly unclear. But to use this story as proof positive -- as my critic does -- of an anti-male bias in American society etc etc is truly unpleasant, misguided, and frankly sick. So I'm updating this post, now,  just in case someone comes upon it through an internet search.

Now let us return to the original post, written way back in 2008.

A list of the stranger bits, each of which merits more attention, maybe in your Fall courses:

The actual miracle is, of course, not the Grand Guignol of the prison: the spectaculum is not the miraculum. The miracle is the salvation of the pregnant nun from producing another of what she was, an unwanted birth. Swollen with child in a cell scarcely able to contain her bulk, gray with exhaustion, she finds relief of a sort in a dream. Archbishop Henry Murdac of York, who had overseen her oblation, appears and berates her. Thanks a lot, Henry. On the next night, he appears again, this time accompanied by two women. Murdac covers her face with his pallium, and after a while, she sees the two women carrying an infant wrapped in white silk. She feels her belly, and it's gone slack. A miracle!

I was reading this episode on one of my flights home from Kalamazoo, and, at the same time, was aware that Pope Benedict had just reaffirmed his church's stance on birth control (for example, see here). With Benedict's words in my mind, I had to ask: what happened to the fetus (or infant, or parasite, &c.) of Watton? Compare this story to another, somewhat similar story Boswell translates (459-60) in which the infant's taken to "a certain hermit...who should bring the baby up in [the BVM's] service." We might also recall Marie de France's "Lai de Fresne," or the many stories of the abandoned child who should have stayed lost (see Oedipus and ff.) But in this story, here, the two women simply leave with the baby.

This miracle is not--apparently not--an abortion. The nuns accuse her of it, but she claims, rightly, that she doesn't know what's become of her infant. It's alive, somewhere, maybe: but I wonder about the silk wrapping: as sideways as such a thought is, I can't help but be reminded of funeral wrappings (and how might a child in 12th-c. Yorkshire be buried?), or of the folds of cloth holding souls in the lap of Abraham, which could function as a sort of antechamber for souls awaiting entry into paradise (see Le Goff, Birth of Purgatory 122).

At Watton, we have, on the one hand, a miracle of astonishing naivete: pushing past a fundamental contradiction, Aelred wants to condemn abortion while maintaining compassion for what his own condemnation causes, viz., the social and emotional catastrophe of forced pregnancy and unwanted children (represented here by the nun of Watton herself and what she carries). On the other hand, we should not simply sniff at Aelred's compassion: is it simply that he wants the impossible, judicial judgment without violence (he explains "I praise not the deed but the zeal; I do not approve the shedding of blood, but I extol the fervor of the holy virgins against such infamy," 117), or can we feel in his desire for the impossible, driven as it is in part by compassion, some possibility of the force of law opening up into something else? Might the law be dissolved by the mixture of Aelred's tears with those of the pregnant oblate?

Further Reading:
For the Latin: PL, vol 195:780-96
Other translations: John Boswell The Comfort of Strangers 452-58 (for a brief discussion, see 310)
O. Gutman in Carolyne Larrington, ed, Women and Writing in Medieval Europe: A Sourcebook 128-33;
Other discussions Sarah Salih, Versions of Virginity in Late Medieval England 152-65, which admirably treats the complexities of space in the story; and Giles Constable, "Ailred of Reivaulx and the Nun of Watton: An Episode in the Early History of the Gilbertine Order," in Medieval Women, ed. Derek Baker (Oxford: Basil Blackwell, 1978): 205-226, which I read in my pre-database days and hence do not remember: did he write about double-monasteries and scandal?
Posted by Karl Steel at 9:40 PM

Karl, fascinatingly disturbing--but there's a lot here to ponder. Something that caught my attention was in your last thoughts: "can we feel in his desire for the impossible, driven as it is in part by compassion, some possibility of the force of law opening up into something else? Might the law be dissolved by the mixture of Aelred's tears with those of the pregnant oblate?"

This raises questions about the authority of divinity--such as the miracle here, or the holiness we should be seeking--and the sanctions of legal ramifications by the human institution of Christianity. This presents, in my mind, questions of how the divine and human synthesize and/or contrast; how the church and its laws are supposed (to ecclesiastical leaders) to represent the divine (and seemingly legislate among/for the miraculous); and tensions of the divinely miraculous and human-ecclesiastical law both as parallel consequences of the same situation.

Jo Ann McNamara translated the episode as well. If memory serves -- and 1995 was a long time ago -- there was an intense discussion thereafter on electronic lists (medfem-l?) It's a sickening, fascinating story, and your sympathies are working contrary to what the narrative wants you to cathect with ... but how can it now be read in any other way?

It'd take me a month to work through what you do here in a couple of deft paragraphs, but what initially attracts my attention are the strange (dis)locations of violence/nonviolence mapped onto the gendered structure of the narrative: furious nuns punish a sister and castrate the rapist while the male clerics facilitate a painless birth or call for compassion. And what is 'lost' in the text - a baby and a penis.

At the same time, could the text be indicating a premature oblation, rather than the interruption of the nun's unwantedness? The child is taken away, presumably into/as God's work?

My Latin sucks, so I'll have to look at a translation and work backward - but thanks for bringing this episode to our attention (again).

Like I said, it'll take me a month. Oh, and I'm finally getting around to 'No Future' and, of course, I have to rethink EVERY DAMN THING I thought I thought before about medieval children and childhood!

Sorry so long in responding!

Brandon, first, thanks for your reaction. I suppose where you would put the divine and the institution, I would put the law: but, yes, I like your approach to these things as reciprocally influenced.

Jeffrey, how indeed, and I think the answer has something to do with us not being monks. I suppose it's necessary for us to reimagine the institutional affect that Aelred felt for any regular order and also his suspicion of the Gilbertines in a period when new orders seemed just to be bursting out all over. The great silence of the story is of course the castrate: there's no miracle for him.

Dan, thanks as always. It'll take me a month to figure out what the hell I was up to! I wonder about the Bishop's oneiric return: he comes back to scold and help the pregnant nun, but I also want (natch) to see it as a kind of apology, an attempt to right a mistake in facilitating an oblation into a bad facility. As for the child being taken away into God's work: I don't know! But, again, I find the (convenient) disappearance of the child as suspicious and strange as the (convenient) exile of the castrate; in the other miracle Boswell provides, the child explicitly finds a place. Not so here. Perhaps there's been enough oblation?

So far as the translation goes: it's been fascinating to compare them. Annoyingly, CUNY gives me no access to the PL: I gleaned what Latin I could from Salih.

On Edelman, Dan, if you haven't done so already, and if you're done with your grading (I'm not! Boo hoo!), read the stuff on him here: there's a ton.