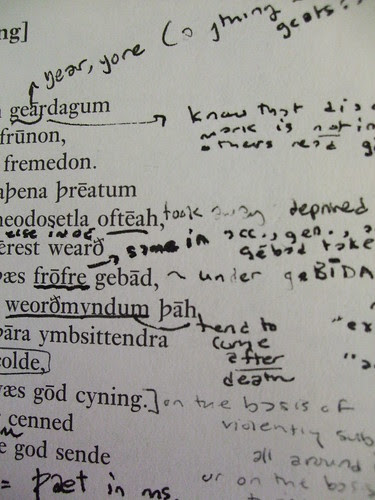 Continuing apologies for the long absence. Part of this I can blame on a (deserved?) week of indolence, and part on my slow march through this extraordinary (and extraordinarily dense) issue of PhaenEx devoted to animals and phenomenology. In it, so far, I've finally discovered coherent explanations for Agamben's The Open (thank you, Kelly Oliver) and have (re?)discovered philosophical biology and ethology in David Morris's "Faces and the Invisible of the Visible: Toward an Animal Ontology." A sample, which does not--caveat--give away the main line of Morris's argument:

each of the germ layers [of the embryo] embod[ies] a different and complex relation of animal insides and outsides. To wit: The ectoderm layer (nerves and skin) takes the outside inside and gives a protective, exploratory and expressive outside to the inside; mesoderm (muscle, skeleton, circulation and waste removal) provides inside support for the body and its outsides, and removes inside waste to the outside; endoderm (guts, liver, lungs) digest the outside to turn it into inside. (Interestingly, the eardrum is a trimembrane composed of cells from each of these layers—a fact that might have perked Derrida’s ears.) (157).

Today's haul from the library included Thomas of Cantimpré's Liber de natura rerum, where I happily ran across its entry on the "Zybo," a wicked, hyena-like creature that imitates the voices of human and dogs, each of which meets its doom when they draw near the creature (e.g., on the dogs, "et, cum approximaverint, a zibonibus discerpuntur"). Interesting stuff here, then, on the conjunction of human and canine voices and desires, recognized by the Zybo as being, at least in effect, the same kind of enemy (or prey?). I'm also pleased by Thomas's juxtaposition of the Zybonic tendency to enter into (presumably human) tombs, where it delights in eating rotten flesh ("et ibi cadaverum spurcitiis delectatur"), and its more general delight in eating human flesh ("carnibus enim humanis libenter vescitur"): what is the relation of these two facts? What I can I do to set them in motion? I'm looking forward to the fun I can have here.

Speaking of fun, thanks a lot Beowulfers. You're all good kings, because your poem won the poll of opening lines. Here's the breakdown, and, above, you'll see my feeble attempt to honor your victory:
Virgil: 21%
Dante: 16%
Beowulf: 28%
Chaucer: 21%
Daphne du Maurier: 12%

One final fun--or perhaps sad--fact: Mars needs women, and the Cerne Abbas giant needs sheep. Wet winter and the absence of grazers has left the giant and its, erm, ponderousness, all too modest. Somehow we need to tempt a mothlike flock to renude the giant. Surely Jeffrey can make something of this odd relationship between animal life and prehistoric landscape?
Posted by Karl Steel at 5:30 PM

what is the relation of these two facts? What I can I do to set them in motion?

The first thing that strikes me as important is they way the imitation works and signifies here. To sound like your prey (appropriate its language before you appropriate it) is to prey upon a kind of species-gullibility (I am with my own kind ergo I am safe) that the Zybo would then be about deconstructing. That the Zybo can perform this undoing both dogwise and humanwise exposes or opens up the zone between being and voice as indeterminate re the animal/human boundary. Cf Agamben's reading of having language (animals) vs. entering language (humans), and his commentary on Hegel's 'every animal finds a voice in death' (cf. tombs). His chapter on the ban and werewolf in Homo Sacer also seems relevant, Zybo as bare life, neither human nor animal, etc. What I really like here the victimal logic, which is how I instinctively tend to read medieval accounts of strange things that can eat you, that is, not, as in modern horror, about the senseless or incomprehensible monster, which it is the job of the innocent victim to witness, comprehend in our stead, but about victimhood as *heedlessness*, as a result, disclosure, contrapasso of a certain blindness and self-reduction. Here one is eaten, reduced to meat, the fleshy stuff that is both human and animal, by not seeing what is neither human or animal, by not hearing voice as such, but only as the sound *of* a determinate being.

I am sloooowly catching up on some blog reading, and want to say two things to this post;

(1) the Zybo's imitation of voices and corpse munching are shared with the hyena (yena) -- so I wonder how different it is from the hyena? Could they be two names for the same creature? Does Thomas have a hyena listed? As you may know, in my own work I've been fascinated with the hyena as a "Jewish" creature, not just in its sexual ambiguity but in its devouring of Christian bodies. The imitation of voices might be a nice way of giving voice to assimilationist anxieties ... Anyway, I'm really just interested in one hyena, in the Aberdeen Bestiary, possibly produced in Lincoln or York in the wake of pogrom.

(2) I don't know what the scholarly consensus is on the Cerne Abbas giant, but I suspect that it is that it is NOT prehistoric (like, say, the Uffington White Horse seems to be). It is never mentioned by medieval sources, even when the hill it is carved upon is. I know there is one theory that it is supposed to be Oliver Cromwell.

Nicola, what a great reading: I like the dangers here of closing oneself off to the multiplicity of signification. Familiarity is deadly. Where's that Agamben you're referencing?

Oliver Cromwell? Very warts and all.

On already having vs. entering language see Agamben, Infancy and History. On animals and voice and death see Language and Death.