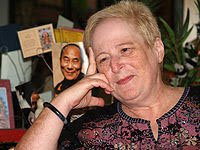 Queer theorist extraordinaire Eve Kosofsky Sedgwick has died at the age of 59.

Though most of my grad school friends were turned on to her work by Between Men and Epistemology of the Closet, my favorite of her early volumes was the second that I read, the essay collection Tendencies. Reading through those genre-bending essays convinced me that there was almost nothing that Sedgwick could not make me see anew. And isn't that what queer theory is all about?

From "White Glasses," an essay in Tendencies, here are a few sentences in which Sedgwick speaks about cancer, femininity, the body, and the complexities of sexual identity:

One of the first things I felt when I was facing the diagnosis of breast cancer was, "Shit, now I guess I really must be a woman." A lot of what I was responding to was the way the formal and folk ideologies around breast cancer not only construct it as a secret whose sharing defines women as such. All of this as if the most obvious thing in the world were the defining centrality of her breasts to any woman's sense of her gender identity and integrity! This did not happen to be my situation: as a person nonprocreative by choice, and whose sense of femininity, whatever it may consist in, has never been routed through a pretty appearance in the imagined view of heterosexual men -- as a woman moreover whose breast eroticism wasn't strong -- I was someone to whom these mammary globes, though pleasing in myself and in others who sported them, were nonetheless relatively peripheral to the complex places where sexuality and gender identity really happen.

Posted by Jeffrey Cohen at 2:40 PM

Sad news! Thanks for posting this, Jeffrey.

This is truly sad news; a tragedy and a great loss for the humanities.

She was a teacher of mine and one of the warmest and most brilliant people I ever knew. It really is a very sad loss.

PS I've seen this very nice photo of Sedgwick all over the place, but it looks like it is from David Shankbone.

Coming back to this, I can't help but think of a conversation I had last Friday with a friend on a familiar topic: the relation between cancer and cellular reproduction. It turns out--as most of around here know, I'm sure--that aging acts as a check on cancer, and vice versa; turn off aging in mice, and they all get cancer; presumably, turn off the propensity to cancer entirely, and aging kills very rapidly. Is the regime of conjoined reproduction and death and self-consuming excess written in our cells, then? What hope does this give queer fantasy and queer (non?)futures?