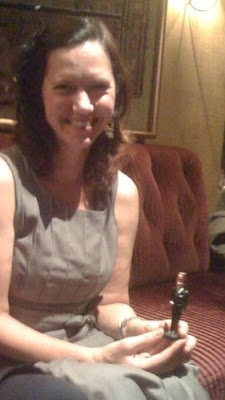 Readers of ITM will be heartened to know that I have decided to become an investigative reporter who will publish all kinds of gossip and filth about contemporary medieval studies. The field is, after all, a rancid and festeresque place. My first subject: Stephanie Trigg. Can she really be as affable as her scholarship and blogging suggest? The answer must be (I reasoned long ago) NO.

With such backstabbing character assassination in mind, I invited Stephanie to DC to give a paper in our GW MEMSI speaker series. To a room of about sixty audience members, she delivered an image-heavy talk entitled "Mythic Capital: Medievalism, Heritage Culture, and the Order of the Garter, 1348-2008." The paper employed the logic of the fetish ("je le sais bien, mais quand même...") to explore the enduring popularity of Order theatrics, the ways in which the admission of an inherent ridiculousness does nothing at all to diminish the seriousness of the over-the-top, ostrich-feathers-and-all sartorial display -- indeed, the ways in which this compulsion to foppishness creates a liminal state for the begartered dignitary, enabling (à la Victor Turner) the permanent passage to a more powerful status. With side excursions to the queer garter and the histroy of affect (especially as glimpsed in a certain ashamed-but-defiant look among garter wearers), the talk was at once brilliant and hilarious -- though I think I might have caught one undergraduate, out of the corner of my eye, texting a friend, indicating that maybe the talk did not hold EVERYONE's attention. Or then again maybe that undergraduate was simply googling the word "liminality."

Stephanie's paper was attended by her husband and son. I instructed them to sit in the back and to deploy the kinds of annoying funny faces that I typically make when people I know are presenting serious work, in order to throw off her stride and perhaps cause a complete neurotic breakdown. Although I cannot report that husband and spawn are evil per se, they did demonstrate a shocking lack of immaturity that I will blame upon the family member who was at the front of the room. So there is that.

Ten of us took the Trigg family out to dinner, and then for drinks at the Venetian Room. I would like to write that I gathered further supporting evidence for my thesis about the evil that inhabits Stephanie Trigg but I came up with precious little, even after she had been plied with a Kingfisher beer, a glass of shiraz, and two old fashioneds. She was even kind hearted to the Tiny Shriner, who is now thinking of dumping Kate Moss and moving to Oz. One of Stephanie's former students came with us, and try as I might I gathered nothing but praise about her from him. Apparently Stephanie has never been cross at anyone and when she walks around the corridors of the University of Melbourne a golden radiance follows her and a small choir sings angelic tunes to the accompaniment of multiple harps. I heard it rumored that in Australia she once healed a man of a platypus bite (he had been petting one at a platypussery, it bit him, and the finger that the animal's bill had closed upon was infected), and that cheese in her vicinity seldom grows mold. (I hope you see the potential for evil here, at least: were she to visit Roquefort, the consequences could be catastrophic).

I continued my attempt to trick Stephanie into blogworthy admissions of her iniquity by taking her and her family on a tour of the National Cathedral yesterday, followed by dinner with my family, followed by an evening of sangria blanca and dessert chez Cohen. I can report that her son is quite a piano player; is more sophisticated at the age of fourteen than most adults I know (including yours truly); is a dandy (though no ostrich feathers yet); and gave me no ammunition whatsoever to trapdoor his mom. The rat. I can also report that her husband is an incredibly smart theorist of globalization from whom I learned something new every time he made an off the cuff observation. They brought gifts for my kids (an inflatable spider for Alex that is so cool I am going to steal it later tonight; a stuffed miniature kangaroo for Katherine that she slept with last night). They were entertaining and gracious and funny and warm. Our families hit it off so well that I spent the evening stewing about how little I would have to blog today.

So, I don't have a great deal of evidence against her, I admit. Stephanie Trigg is no Suger of Saint Denis. But there is something dark about this theorist of medievalism all the same, something ominously nefarious and possibly even deleterious. I will see her soon at Kalamazoo, and the investigation will continue.

Thank you for having the courage to tell the truth here. I always knew that Stephanie Trigg was [I mean, is not] evil. Your loose lips, however, regarding Tiny's whereabouts last night, have already led to Kate Moss twittering everyone that she needs valium. Did you *want* to drive her back into Pete Doherty's arms?

Joel here, pleased to see that our flawless exteriors continue to shroud the inner evil . . . oops, probably shouldn't have said that. My folks will probably give me hell for that when we return to the inner sanctum of evil (home).

On a serious note, thank you sincerely for your lovely description. We were most humbled to read your praise.

Thanks again for a wonderful evening,

Apparently Stephanie has never been cross at anyone and when she walks around the corridors of the University of Melbourne a golden radiance follows her and a small choir sings angelic tunes to the accompaniment of multiple harps. This is absolutely true: Andrew Stephenson and I agreed on this just the other day.

Eileen: yes. Kate is so slender no one notices where she is anyway.

Joel I will not even ask why your nom de blog is McDuck ... Anyway, the pleasure of getting to know you and your family was great.

Gosh, who would have known that behind JJC's own genial exterior lies such a heart of darkness?

Readers, you would have been just as led astray as I was. Be warned, next time you think about venturing to DC.

Did I really drink two cocktails? See above, about being led astray... Or perhaps it was Tiny's bad influence. Let's hope he's not in dialogue with those angels.

Evil, certainly! My experience with her confirmed it. She actually quoted my dissertation-- who reads these things anymore? What's more she discussed it fairly and with insight. She's definitely too good to be true. I recommend she be watched (and read) carefully.