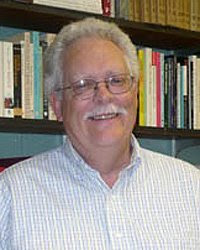 The Medieval Academy of America has chosen Richard K. Emmerson for its 2009 Excellence in Teaching Medieval Studies award.

Most of us know Rick for his wide-ranging scholarship, and for his time as executive director of the Medieval Academy of America.

I personally owe an immense debt of gratitude to Rick for having rescued The Postcolonial Middle Ages from the trash heap of "Brief Notices" to which it had been consigned and for actually reviewing the volume. Under his tenure Speculum became a good deal more interesting as well.
Posted by Jeffrey Cohen at 9:30 AM

(sneaking back onto ITM briefly. Will return fully this week!)

I have to thank Rick for me being a medievalist at all! He was the chair and medievalist at Western Washington's English Dept. when I was getting my MA, and his generosity, and inestimable help in developing my projects, taught me a lot about what a teacher and scholar should be.

In other words, richly deserved!