In Search of Lost Time Again 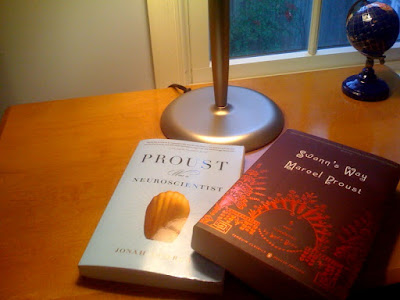 "Although he had a weak spot for subclauses and patisserie, somehow, by sheer force of adjectives and loneliness, [Marcel Proust] intuited some of modern neuroscience's most basic tenets."

That elegant little sentence, with its unexpected conjunction of grammar and bakery, of wordcraft and solitude, comes from my recent bedstand reading, Jonah Lehrer's Proust Was a Neuroscientist. With chapters on Walt Whitman, George Eliot, Paul Cézanne, Auguste Escoffier, Igor Stravinsky, Gertrude Stein (a chapter that enabled me finally to understand the ambition of her work), and Virginia Woolf -- well, what modernist-enamored aesthete wouldn't love Lehrer's book? He combines an artist's prose (subtitle from the Proust chapter: "The Lie of Yesterday"), a scientist's enthusiasm for detail, and a journalist's ardor for Big Picture narrative. I recommend the volume highly.

As a side effect of reading Lehrer, I've been inspired for the third time to attempt to make it through A la Recherche du Temps Perdu -- if only because this blog has always been in search of lost time. My first Proustian failure was in graduate school, during a bleak summer in which I was consigned to a 'German For Reading Knowledge' course. I purchased an aged copy of Swan's Way to enjoy in my spare time, for no other reason than I had always wanted to read the book with a big cup of tea and a madeleine to dip in it. The promised spare time failed to arrive, however. Three years later the paperback's glue binding dissolved, scattering lost time across the linoleum. Shortly after the dissolution of the novel I found a copy in French at a yard sale, and decided it would be good for me to spend a summer reading the work in its original. I am not sure whether I reached page ten or page twelve -- but as yet I had not reached the cookie-in-the-tea dunk.

Last Saturday in New York City, my son Alex and I had a cold, wet afternoon to ourselves. We visited Nintendo World, wasting all of thirty minutes. We weren't meeting the rest of the family for quite some time, we were already soaked from walking ... so we did what any normal American father and son do: we headed to the nearest bookstore and each purchased the fattest volume we could lay our hands upon (Alex got one of these, don't ask me which one). We then retreated to the nearest coffee shop, sat with warm beverages, and read quietly in each other's company until five o'clock. That moment of rest during a four day whirlwind of seeing, moving, and doing was bliss. I've always had a fondness for reading on rainy days, especially when a large window yields a view of passersby, mobile in their solitude, their faces not intended to be interpreted.

So I am now farther into Swann's Way than I have ever been (which is to say p. 71 of the new Penguin translation). And you know, I am not sure I was ready earlier in life to be bowled over by a sentence like this one, in which Marcel describes the two rooms in Combray where his aunt lives her circumscribed life:

These were the sorts of provincial rooms which -- just as in certain countries entire tracts of air or ocean are illuminated or perfumed by myriad protozoa that we cannot see -- enchant us with the thousand smells given off by the virtues, by wisdom, by habits, a whole secret life, invisible, superabundant, and moral which the atmosphere holds in suspension; smells still natural, certainly, and colored by the weather like those of the neighboring countryside, but already homey, human and enclosed, an exquisite, ingenious, and limpid jelly of all the fruits of the year that have left the orchard for the cupboard; seasonal, but movable and domestic, correcting the piquancy of the hoarfrost withe the sweetness of warm bread, as lazy and punctual as a village clock, roving and orderly, heedless and foresightful, linen smells, morning smells, pious smells, happy with a peace that brings only an increase of anxiety and with a prosiness that serves as a great reservoir of poetry for one who passes through it without having lived in it.

I love that single sentence so much that I'd give up any of the books I've written just to be able to compose something so artful. I immediately read it aloud to Alex in the coffee shop ... and he in return read to me a sentence from his own book, in which the Chaos Gem is shattered and legions of the undead enter the world riding dragons wrought of flame.
Posted by Jeffrey Cohen at 8:51 AM

Thanks for this lovely post, Jeffrey which reminds me that I, too, have always wanted to read "A la Recherche du Temps Perdu," but I have not. You also reminded me that I once set myself the task of reading Escoffier's famous cookbook. I cannot cook, have never cooked, and will likely never cook anything [seriously], but I once went through this period where I only wanted to read cookbooks, and someone dared me to read Escoffier cover to cover. I failed in that venture, but I did manage to insert him as a character into a short story. Oh, and now I must get that Lehrer book.

You may perhaps "comfort" yourself in knowing that I cook all the time, am quite good, and have never read a cookbook cover to cover, or even whole sections of one. Rather like reading literature, a good cook book causes a million mental eruptions that interrupt the flow of reading as one enters the agora of conversations from all of time.

Just recently for example on another forum the issue of French Toast came up: bread (one of the oldest of domesticated human discoveries)fried after being dipped in some mixture of eggs and/or milk and spices covered in something sweet (honey, sugar and rose water, syrup, jams.....). An ancient dish. A medieval dish the names for it in various vernaculars are still with us. A modern dish (the addition of New World vanilla for example). A rish dish. A dish for the poor. The most basic of staples. Mere French Toast in a cookbook is a cacophony of chat covering all human time from the invention of bread to now. I can't read a cookbook cover to cover.

Personally, I could barely get through the 100-page section I had to read for a class once. But I'd be willing to try again someday.

I'll be looking forward to further posts about your adventures with Proust.

Glad you're reading this, JJC, and thanks for sharing. I'll promote my current reading-for-fun here, too, from Still Life (1985), the second book of A. S. Byatt's tetrology, which is brilliant beyond my comprehension. I quote this section because of the Proust allusion:

"I had the idea, when I began this novel, that it would be a novel of naming and accuracy. I wanted to write a novel as Williams said a poem should be--no ideas but in things. I even thought of trying to write without figures of speech, but had to give up that plan, quite early. It may be possible to name without metaphor, to describe simply and clearly, to categorize and distinguish, one specimen from another, arrenatherum, les jeunes gens en fleurs."

But then she goes on to write:

"Adam in the garden named the flora and fauna (and the rocks and stones, presumably, and perhaps also the gases and liquids, atoms and molecules, protons and electrons). But even in the act of naming, we make metaphors. Consider the grasses, so carefully distinguished one from the other. They are little figures of speech. Gastridium--nit grass, from gastridion, a little swelling. Aira--hair grass, from airo, to destroy (a destructive grass). Panicum, or panic grass, from panis, bread, because the seeds of the grass can be milled and eaten. Arrhenatherum is from arrhen, male, and ather, an awn. It was the natural grass for me to put into a sentence with the shade of les jeunes gens en fleurs? And then the vernal grass, anthoxanthum--anthos, a flower, xanthos, yellow, next to phalaris--phalos, shining, and suddenly, do we have a description, or an evocation of the fields of light? (323-24)