My Son, Who Does NOT Resemble Harry Potter 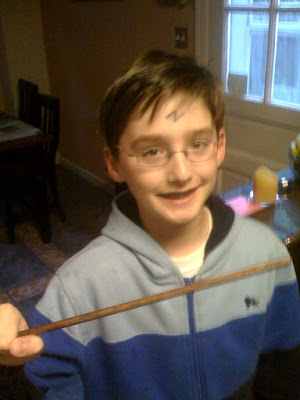 A common misobservation offered about my soon-to-be twelve year old is that he resembles a certain Hogwarts wizard in training played by Daniel Radcliffe. Alex will with vigor correct anyone who states that such a resemblance exists. Usually I will say something in return like "Keep that anger in check or your lightning bolt scar will throb!" My paternal jesting does nothing to alleviate his contempt for Rowling-inspired comparisons.

A low point of this Potteresque haunting occurred on Grand Cayman a few years ago, when two elderly women were sitting in a gift shop conversing in patois. They were pointing at Alex and giggling. We could understand nothing of what they said to each other except for the words "Arry Potter."

So I was quite surprised this morning when for Spirit Day at School (theme: dress as your favorite film character) Alex descended from his bedroom lair with wand in hand and scar on forehead. Petrificus totalus! and other bad Latin to anyone who doesn't discern a certain proclivity for wizarding within him, after all.
Posted by Jeffrey Cohen at 7:35 AM