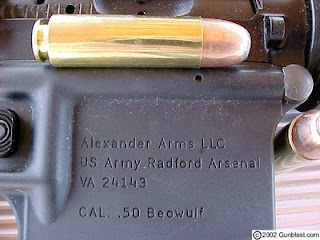 Yes, my friends, what you see in this photograph is the Beowulf bullet, specially designed for an AR-15 automatic rifle [also called the Beowulf rifle]. Here is how one gun enthusiast describes the bullet and rifle:

The Alexander Arms .50 Beowulf cartridge packs awesome power in the AR-15 system. Think of it as a lightweight, handy, semi-auto .45/70 but with a larger diameter bullet and greater velocity. The .50 Beowulf uses a bullet of a true .500 caliber, with loaded ammunition offered from the factory in either a 400-grain soft point or a 325-grain hollow point, with velocities listed at 1800 and 1950 feet-per-second, respectively. This kind of power radically changes the performance aspect of the AR-15 type rifle while retaining the excellent handling and shooting qualities of the weapon. The .50 Beowulf cartridge utilizes possibly the maximum diameter bullet in the biggest case that can be made to reliably function in an AR-15, while operating at a relatively low pressure to assure smooth operation and longevity of the rifle.

Oh brave new world, with such weapons and bullets in it! If this sort of thing really intrigues you, you can read more about it here and here. Note also that the same company, Alexander Arms, has also recently developed a Grendel rifle which can shoot targets at even longer range than the Beowulf rifle. Of the Grendel rifle, the company claims, "Currently in testing with the US Military for widespread adoption, the 6.5 Grendel® seems assured a place in history." Oh yeah, baby.
Posted by Eileen Joy at 9:00 AM

Oh, and I suppose I should also register here [in case my "oh yeah, baby!" is not properly understood as sarcasm] that, yes, I am appalled.

So does this mean the person with the Grendel rifle can take down the person wielding the Beowulf rifle? Because someone needs to go back and read the work, if that is so.

Also, where is the bayonet for dismembering?

That's exactly, it, Jeffrey, but only if Grendel has enough *distance* on Beowulf [ha!].

Also, when you start reading the gun enthusiasts' encomiums to rifles and bullets, it starts to sound an awful lot like sex; for example, the Beowulf rifle/bullet is as big as it gets [maximum diameter] but is also "smooth," with "longevity." Well . . . whatever.

Recall, too, that the Beowulf rifle is apparently devestating at closer ranges [Beowulf had to rip Grendel's shoulder and arm off, after all, to finally kill him], whereas Grendel comes from "a ways off" to devour his victims. It all makes sense to me now. Also, it's hot.

I'm waiting for the Mother-of-Grendel rifle to come out, so we can properly sew up all this psychoanalytic passion.

But really, are weapons any less (homo)erotic in the tale itself?

Would be infinitely cooler if it took a grip strong as thirty men to pull the trigger.

Nicola: "Would be infinitely cooler if it took a grip strong as thirty men to pull the trigger."


Kvond: (smiles)It would give new meaning to the term "hair trigger"...something counter to the "millstone trigger".

Perhaps we already have this sort of weapon.

In fact, it occurs to me that Nietzsche who out-does everyone, has already come up with the five-hundred handed trigger:

"Genius is perhaps not really so rare, but the five hundred hands needed to tyrannize the kairos, “the right time,” to seize time by the forelock!"

it starts to sound an awful lot like sex;
Well, the bullet does---sorry---look an awful lot like a cock. There's no getting around it. One wonders about the fantasized 'truths' that psychoanalysis has taught us to have...