The Timely Arrival of Some Untimely Material: J. Gil Harris, Untimely Matter in the Time of Shakespeare 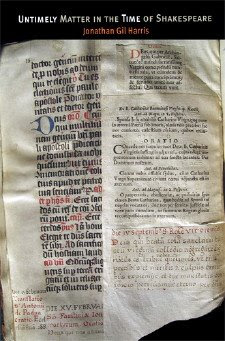 And how could it not? I am an unabashed devotee of Untimely Matter in the Time of Shakespeare. I've read it cover to cover twice, and believe it to be one of the liveliest and most perceptive works of scholarship I've encountered.

Time is a subject that has long preoccupied my own research: the "Midcolonial" section of The Postcolonial Middle Ages, "Time's Machines" in Medieval Identity Machines. I've deployed a proliferation of terms (midcolonial, extimité, inhuman circuit, difficult middles) to describe what Harris succinctly labels the polychronic , the simultaneous cohabitation of heterogeneous temporalities within a material object -- where materiality and temporality are active components of a hybridizing, mobile network rather than solitary and self-segregated pieces of a still world. The arguments of Untimely Matter are as relevant to medieval studies as they are to early modernists, insisting that temporality can be thought as something other than straightforward, historicist chronology. Untimley Matter is pitched strongly against what Harris calls the "national sovereignty model of temporality," in which each temporal moment is essentially its own country, with its own rules and borders and determinations of meaning (p. 2). Against synchronic (past as bounded and determinate field of meaning) and diachronic (past as array of discrete eras) readings, Harris argues for the "multiple traces of time embedded in things" (9), what Kathy Biddick has called "the temporality that is not one." His point of departure is Nietzsche's idea of unzeitgemässe, which might be translated as the temporally improper, "resisting absorption into a homogeneous present" (11) -- spurring us to think "how we might use the past to imagine alternatives to the present and to chronology itself" (13).

Harris's central figure in the book is the palimpsest: the work written over by other works, creating an evident simultaneity of times. Palimpsests can be textual (the Archimedes Palimpsest), architectural (Pisa cathedral has a stone embedded within its façade imprinted with IMPCAESAR, rendering evident its origin in a pagan monument; all cities are palimpsests), or conceptual: they are always, however, material and capable of agency, especially future-directed agency. The palimpsested past, in Harris's account, is thick with possibility:
Though positioned last and certainly valorized, conjunction is not a synthesis in the Hegelian sense of Aufhebung, which would smooth away time's wrinkles and act in a way that is supercessionary. Any synthesis here is in the sense propounded by Michel Serres, who along with Bruno Latour is a patron god of Untimely Matter: "synthesis as a proximation rather than a transcendence of supposedly disparate elements," "an embrace of alterity" rather than an obliteration of difference, "synthesis that refuses singularity, that opens up to heterogeneity" (146). Conjunction is also the only temporality that opens the possibility of dialogue (16).

Given my own looming date with scholarship destiny, I read Untimely Matter with an eye towards how it might spur a rethinking of Jewish-Christian relations in the Middle Ages. The figure of the Jews wanders through Harris's work like, well, a Wandering Jew: surpassed but not quite in Herbert's The Temple, bequeathing explosive inscriptions to Stow's London, written as new Cabbala by Cavendish. Related figures are also central: the Oriental Other, the queer. Heterogeneity in temporality is inseparable throughout from cultural and geographical difference. Untimely Matter provides a rich vocabulary for describing the multiple temporalities that necessarily come into play when Jews lived among Christians in places like London, Lincoln, York and Norwich. Harris's idea of conjunction also ensures that I will be examining Jewish-Christian coinhabitation as dialogue-producing space (or network) where both identities are susceptible to change, to narratives and futures not given in advance.

I did wonder throughout the book about the place of its own author. Maybe that is simply because I know him ... and yet I found the traces of Harris that he leaves throughout the volume to cry out for more story. Photos of statues from Ludgate, now in St. Dunstan-in-the-West Church, are attributed to the author: with whom did he tour the church, and what did he seek, and what unfolded at the moment of beholding these statues mediated by Stow? The translation of the Hebrew characters Stow inscribes is attributed to Stella Harris: I could not stop myself from yearning for a story about this, because it seemed to me that something had to be at stake that was unspoken, something central to the book itself. In a brilliant chapter on Margaret Cavendish and Hélène Cixous, Harris suggests that three authors are touching ... but the one in "Washington, D.C., 2008" gets only that line. But I don't want this to be the kind of review that takes the author to task for not having written the kind of volume the reviewer would write: indeed, I get the feeling that the small traces without narratives were in fact a deliberate strategy on Harris's part.

Long story short: this is a brilliant book. I haven't enjoyed reading a work of scholarship so much in quite a while. I'd highly recommend that In the Middle readers add Untimely Matter to their summer reading lists.

Posted by Jeffrey Cohen at 9:32 AM

Yes - we certainly need more complicated ways of thinking about intersections of time and bodies - this sounds fascinating.

I spoke at Leeds JHSE earlier this week on medieval York jews and I don't particularly want to blog about it, but it was an enriching experience. The idea of the conference was warmly received and I am sure that you will be very warmly received too.

Gil's book has been on my reading list since it was first published and this review makes me even more eager to get to it [likely just after the Leeds Congess]. With "conjunction," I can't but help think of the related term "conjuncture," which was so popular with the Annales School historians, and of Braudel's idea of the "semi-stillness" of certain events, ideas, and objects within the longer time-schemes of history.

You're way too kind, Jeffrey. A fresh 1000-rupee note is in the mail to you from here in Delhi!