I Would Hurt a Fly 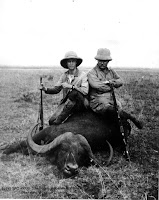 First, of course, you must read Eileen's most recent post on Leo Bersani. And then Jeffrey's post above, on the Fourth Culture and the spaces of dialogue between the Humanities and Science.

By now, you've probably all seen Obama's fly-killing prowess. You may have also heard about PETA's much-mocked response:

But now People for the Ethical Treatment of Animals, calling it an “execution,” wants the commander-in-chief to show a little more compassion to even “the least sympathetic animals.”

“Believe it or not, we've actually been contacted by multiple media outlets wanting to know PETA's official response to the executive insect execution,” a blog on the group’s website explained. “In a nutshell, our position is this: He isn't the Buddha, he's a human being, and human beings have a long way to go before they think before they act.”

The group has sent Obama a device that traps a fly so it can then be released outside.

“We believe that people, where they can be compassionate, should be, for all animals,” PETA spokesman Bruce Freidrich explained.

With all the necessary statements about my dubiousness about PETA's methods, I wonder what structures of power this mockery of consideration for the fly serves to sustain? What if Obama hadn't killed it, but had, rather, contained the fly and set it outside? What would he have been giving up? Would he have endured mockery for his compassion? And what has he gained by killing such a contemptible animal so skillfully in so public a way?

I've assembled a kind of florilegia to answer the question.

Wido of Spoleto is denied the Frankish throne in 888 because of his frugal eating:

And as [Wido of Spoleto] wanted to enter that part of France they call Roman, crossing the kingdom of the Burgundians, there met him messengers of the Franks telling him to go back because, worn out by the long wait, as they could not be without a king for a long time, they had elected Odo with all assenting. It is said, however, that the Franks actually did not take Wido as their king on account of this. For when he was coming to the city of Metz, which shines most powerful in the kingdom of Lothar, Wido sent ahead his servant who was to prepare food for him in the royal style. And the bishop of Metz received an answer like this from the servant, when he served him much food according to the custom of the Franks: "If you give me at least a horse, I will arrange things in such a way that King Wido will be satisfied with a third of all this after he has feasted." When the bishop heard this, "it is not proper," he said," for such a king to rule over us, who prepares himself a cheap ten-coin meal." And so it happened that they abandoned Wido and instead elected Odo. (Liudprand of Cremona, Historia Gestorum Regum et Imperatorum sive Antapodosis, I.16; in PL 136:0801A-B; translation from 58-59)

Guiborc in the Chanson de Guillaume encourages her husband to return to battle after watching him eat:

'By the God of Glory, who caused my conversion, to whom I shall deliver my sinner's soul, anyone who can eat a great, fine white-loaf, and not leave because of that his two roast pasties and eats up a whole great pork brawn, and after that a great roast peacock, and drinks a gallon of wine at two draughts, will wage harsh war on his neighbor! He'll not flee cravenly from the field, or bring shame on his family!"

The Middle English translation of the Alphabet of Tales describes the character and appearance of Charlemagne:

And he ete bod littyl brede, bod at ans he wolde ete a quarter of a weddur, or ij hennys, or a guse, or a swyne shulder, or a pacok, or a crane, or a hale hare.

I have always supposed, ever since I was able to play around, that the acknowledged destiny of a pig is sausage, or ham, or bacon or pork.

Derrida, "Eating Well, Or, The Calculation of the Subject"

The subject does not want just to master and possess nature actively. In our cultures, he accepts sacrifice and eats flesh. Since we haven't much time or space here, and at the risk of provoking some kind of loud protests (we pretty much know from which quarter), I would ask you: in our countries, who would stand any chance of becoming a chef d'Etat (a head of State), and of thereby acceding 'to the head,' by publically, and therefore exemplarily, declaring him- or herself to be a vegetarian? The chef must be an eater of flesh....To say nothing of celibacy, of homosexuality, and even of femininity (which for the moment, and so rarely, is only admitted to the head of whatever it might be, especially the State, if it lets itself be translated into a virile and heroic schema. (281)

You are what you socially consume. Killing makes you powerful. And both these animal-directed actions must be public events to count. Thanks for the florilegia, Karl.

Derrida begins to get at this, I think: I can't help wondering if part of the attraction of the Obama swatting the fly video is the president-as-superhero narrative that went with it -- at least in the many Facebook postings of the clip I saw, where he was labeled a ninja, his reflexes were praised, and so on. AND I couldn't help wonder if there is a connection between the Obama clip and a certain blaxploitation film from 1972 that has the word fly in its title. Am I wrong to think there might be something about race as well as masculinity at play in the fascination with the scene?