HOT OFF THE PRESS: The Latest Entry in "babelisms" (The Heroic Age, Issue 12) 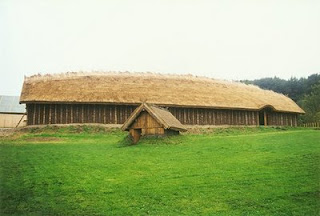 Issue 12 of The Heroic Age is finally out, and that means yet another installment in the regular column of the BABEL Working Group, "babelisms," which features essays solicited and edited by me and other members of the Group. This column features work that focuses primarily on the artifacts—real and fictional, textual and otherwise—of early northwestern Europe, and draws connections between those artifacts with more modern arts and letters and with postmodern critical thought. Our hope is that these essays will demonstrate an early literary and historical studies that are attentive to what the late Edward Said described as the "worldliness" of texts—their material existence in both past and present contexts—and that is mindful that our criticism of those texts is also "worldly"—that it embodies, in Said's words, "those processes and actual conditions in the present by means of which art and writing bear significance." We hope, further, that these essays reveal some of the ways in which, again in Said's words, "worldliness, circumstantiality, the text's status as an event having sensuous particularity as well as historical contingency, are considered as being incorporated in the text, an infrangible part of its capacity for conveying and producing meaning" (Said 1983).

For an overview of the entire issue from the journal's editor, Larry Swain, go to his "Letter from the Editor"
Posted by Eileen Joy at 8:01 AM