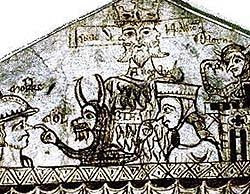 From some work in progress:

The twelfth-century cleric Gerald of Wales tells a story about a Jew who doubted Saint Frideswide of Oxford.

The narrative appears in his Gemma ecclesiastica ["Jewel of the Church"]. This text on canon and moral law seems to have been composed during Gerald’s studies at Lincoln towards the close of the twelfth century – a time when Jews and Christians were living in the city together, sometimes quite peacefully, sometimes not. In a long arc of examples illustrating God’s propensity to strike those who question Christian dogma deaf, dumb, paralyzed, or defunct, Gerald supplies an episode “which took place in modern times,” when the body of the city’s patron saint was translated from the monastery in which she died to a shrine church.

The event took place in 1180, and may have been witnessed by Gerald himself. This moment of civic celebration was marked by frequent miracles worked by the Anglo-Saxon virgin, drawing a stream of worshipers to her new tomb. A certain young Jew infiltrated the crowd, with hands and legs tied by cords as if he were paralyzed. After “mockingly” begging the saint for help, he would unbind his ropes and declare himself healed, shouting “Behold, what great miracles the holy Frideswide can work! She has cured others in the same way as she has just now cured me.”

This nameless Jew, in other words, undermined through histrionic excess the marvels supporting the saint’s revitalized cult. Riffing on what Judith Butler called “gender insubordination,” we might call this irreverent Jewish imitation “dogma insubordination”: a parodic overperformance of an orthodox norm that empties that norm of self-evidence, that erodes its foundation by exposing its status as effect “disingenuously renamed” as cause, a fabrication susceptible to disruption. The Jew’s confrontational parody of saintly healing was meant to cast doubt on the veracity of the Oxfordian efflorescence of cures. Can an obscure virgin from five hundred years ago really be so powerful “in modern times”?

The Jew, in other words, seems to be speaking a thought likely on more minds than his own. He pays a price for his lampooning of orthodoxy, hanging himself in his father’s cellar by the same cords with which he faked a divinely given mobility. He dies uttering an unspecified blasphemy, a last and a lost protest against the narrative vengeance machine that swallows him, that engulfs every Jew in Gerald’s text who dares poke a lance against a crucifix or hurl a rock at an image of Christ or desecrate a host. Although his parents attempt to conceal their son’s suicide, the event is quickly made public by “the Jewish family’s servants and nurses, who were Christians” – to the “great joy and rejoicing” of the Christians, and the “great shame and confusion” of the Jews (Jewel of the Church 1.51, p. 118).

[An early instance here of Jewish humor. Nowadays Christians just laugh at Jewish jokes, or groan, or throw a tomato. Back then God forced you to kill yourself. No one likes a yid punk].
Posted by Jeffrey Cohen at 3:46 PM

Out of curiosity, what kind of clergy would have staffed the shrine church? I ask because I'm expecting that there might be some kind of conflict between the monks, who lost (?) their saint, and the clergy of this (new?) shrine, who stand to gain a lot through this translatio, or, if you like, a legalized furta sacra. If that's the case, part of the rationale for the presence of the Jew at this translation may be to allow Gerald to embody the conflicts with the Xian community of Lincoln by using an 'alien' body, wherein the Jew is made to carry the burden of anger about the relics [think of the way Jews also made to carry anxiety of the filth of Mary's womb during the 13th-c. Talmud debates]. I also can't remember off hand Gerald's attitudes towards monks, or theirs toward him: but that might matter here, too. Not that any of this concerns your Leeds project, but just curious.

Also of interest here: the Xian nurses! From a quick check of my notes, prohibitions against Xians serving as wetnurses to the Jews date from the early 13th century at the earliest [perhaps earlier I would guess in Visigothic Code, not that this matters for 12th-c. England], although H. G. Richardson alludes to some secular law concerning this that predates canon law. And, this is far afield, but Gérard Nahon, “From the Rue aux Juifs to the Chemin du Roy: The Classical Age of French Jewry, 1108-1223,” has, on Rabbinical law, “Eight talmudic prohibitions limited relations with non-Jews: it was forbidden to transact with them during their festivals, to keep an animal in their homes or in the care of their shepherds, to sell livestock to them directly, to employ their wet-nurses, to teach them Hebrew, to rent them houses, or to associate with them. Rabbinical law in the 12th century accepted compromises on these points” (320).

Did I tell you about the cool 12th C anti-Semitism panel I went to at the zoo? I have some notes, especially on Michael Staunton's paper that might have some connection (plus it had two kinds of undead) ...


Interesting comment, Karl! If the link is to be trusted, and Frideswide was a newly rediscovered saint, being reinterred with a big ceremony -- no doubt to increase the prestige of the Augustinians and Roman church -- I suspect that the tension may have been between the Augustinians and local Christian, but not necessarily Roman Catholic, dissenters. Really, who is a better symbol of the dissenter than a Jew?

This seems to be smaller scale, but the same sort of strategy Gerald uses to argue for military colonialism to support the centralized Church's moves into Ireland and Wales. In those cases, disagreeing with the Church put one in the category of lustful, unnatural, bestiality-practicing secretly druid Celt, in this case dissent makes one a Jew.
That there are actual Jews in the city makes the story better, because the 'enemy' is already at the gate. Gerald loves a looming threat of difference.

Anyway, I don't expect that any of this is helpful to anyone, but I really like the practice of reading Gerald as "reaction to resistance" lit.

Mine works better w/out the typo:

to embody the conflicts with the Xian community of Lincoln

should be "within"!
==
(2 kinds of undead? hmmm? you know about the travestite zombie in Geoffrey of Auxerre's Apocalypse Commentary?)

Karl, ADM, HC: thanks for your comments.

I'm not sure what internal competition among Christians might have been stoked by the translation of the relics. It's a good question, and one I'll have to think about more.

The reason I begin with the passage has less to do with the Jew of Unbelief who figures in it than the offhand reference to Christian servants and nurses within the Jewish household. That's my catalyst. I'll try to post a bit more about it soon.

ADM, if there is anything relevant from your notes I would love to learn it!

Jeffrey -- I'll look at my notes and shoot them to you.