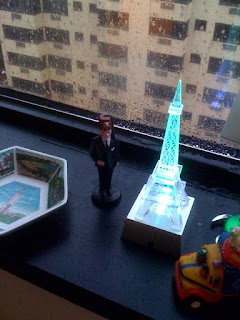 [illustrations: Tiny Shriner with Blue Tower; Avenue of the Unhappy]

On January 1 2010 my four year reign of terror comes to its close.

No longer shall I be chair of the GW English department. That approaching future assists me in getting through some of the soul-grinding tasks that are mine to perform: "I can fill out this Master Course Data Form because it is my last one ever!" "I will obsess over the number of upper division literature courses fulfilling the 1700-1900 requirement because once done, never again!" "I will refuse to nod off, think about lunch, surreptitiously check my email or read the book I have hidden in this folder because I'll never attend this series of meetings in the future!" Through the end of December I will be a good university citizen, attend lunches with potential donors, compose memos, answer thousands of emails, plan events, meet and direct and oversee because on January 1 2010 I become the person formerly known as Department Chair, now referred to as "The Hermit." Fleeting glimpses in darkened corridors will become the stuff of legend. "I think I had a Cohen sighting yesterday" will pass for exciting news among students and colleagues.

It's easy to be glib about the end of my term as chair. I'm an academic, after all, and academics are suppose to be hostile to administration. Yet glibness hides the fact that I'll miss much of what I now do. You'll think I'm being too rosy when I state this, but  it happens to be fully true: whereas in my scholarship I wrestle with intractable problems, one of the joys of being chair is that you can solve, sometimes quite quickly, the problems that students and colleagues bring to you. Having someone leave the office feeling supported, assisted, valued, happy gives me great pleasure. I'll miss being called upon to help. 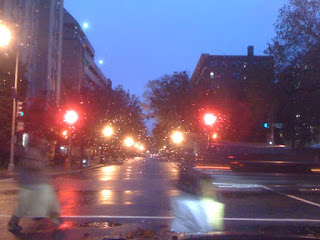 What I won't miss, though, is the constant song and dance routine that I perform in an attempt to have my university acknowledge frequently and loudly that humanities research matters. Much of my chairly scheming involves placing administrators who are far above my pay grade in situations where they are called upon to praise my department (NB: this works only to the extent that my department is praiseworthy; fortunately my colleagues and our students ensure that it is). Nearing the end of my term, though, I'm a bit worn down by the energy required to keep this attention machine running. I have also grown weary of the narrow minded decisions and facile declarations some administrators are prone to make. We have the chance to hire a famous writer who happens to have both a Macarthur "genius" grant and Pulitzer to his name. "But he didn't earn those while he was at GW" is the latest, tediously dumb objection I have heard to hiring him, stated by someone in great power who ought to know better. Sometimes I fear that faulty logic stated with conviction will make my head pop open and render me the first English chair to die in office of massive brain malfunction.

Of course, I'll still be fighting the good fight, scheming the good schemes, and countering illogic with keen memos and plentiful eye rolling when I am no longer chair: partly because I will not actually become The Hermit (I am a member of a department I care deeply about, after all), partly because I will still be an administrator (Director of GW MEMSI). It will be good, though, to have less email to answer, fewer forms to fill, and a little more time to think about medieval studies.

This post fills me with no little alarm: as of January 1, I take up a two or three year term as head of the English and Theatre program in my school. Will it be a reign of terror? I know I'm terrified.

I can kind of understand there might be some satisfaction in the role, and I have heard similar remarks from other folk. I realise I'm already starting to think about some things I could build and do and bring about, too.

But what worries me most is confrontation, at which I am very bad, and the regime of compliance (paperwork, forms, plans, proposals, budget plan) at which I fear I might be rather good.

But the main reason I'm doing it is simple: it's my turn.

The confrontation thing worried me a little at first. Luckily I have a sister and a spouse who are seasoned managers. They both talked about the importance of being straightforward and honest (but constructive). My sister used the expression "managerial cowardice" to describe backing down from issues that need to be addressed, and that seemed right. In my experience, addressing someone's failings, issues, potential problems is never as difficult as dreaded and can actually be a helpful encounter.

Sometimes of course there is a jerk who either thrives on confrontation or who provokes it for other reasons. I had a faculty member who would predictably attempt an alpha dog moment on me at each faculty meeting. The key was to always keep calm, be patient and measured ... and also rely on other people to accomplish the necessary public shaming such behavior demands, often simply by asking 'What does everyone else think?'

Anyway, I am sure you will be a spectacular head of English and Theatre, Stephanie!

Ah yes, the alpha dog moment. I've seen that many times over the years as successive male colleagues take the chair and have to weather this. You know, I'm the first woman to do this job in my neck of the woods; I suppose the gender dynamics might vary a bit. I'll report back next year — though with my new chairly discretion, of course!