Blogging the Middle Ages: Got Medieval 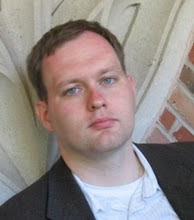 by Carl Pyrdum III
[a contribution to our ongoing series]

I started blogging in June of 2004 because, well, all the cool kids were doing it. I posted a few times and then promptly forgot I had started a blog for a few months. When I returned, I found that a few of my posts had attracted a few comments. I had apparently stumbled into an audience--if a small one--but had no idea what to do with it.

I took my cues from mainstream bloggers, rather than medieval.  (Truth be told, I wasn't really aware back then that there were other medieval bloggers, and even today I read far fewer medievalists blogs than I ought.) So at first, Got Medieval was more or less just your standard gripe blog where I vented my spleen at journalists, screen writers, tv executives, and other pop cultural figures who mangled their medieval history and  all the people I met at cocktail parties who didn't know what to say when I said I was a medievalist.*

As time went by, though, I found that even expanding the enemies list to include Dan Brown, Harry Potter, Brad Miner, et al, I was running out of things that could get me worked up enough to blog. So I started working in posts on medieval things that I thought were--for lack of a better term--"nifty".  And then the blog just kind of exploded and got really popular**. I wish I could identify a single turning point that could account for it.  Posting about medieval beavers helped.

That's where the marginalia came from, really.  I knew I was going to be unavailable for a month but didn't want to leave my readers in a lurch, lest they abandon me for something niftier, so I threw together some posts and scheduled them out over the month.  When I got back, I just kept at it, because people seemed to like it.

At the risk of sounding twee, if there's anything that ultimately distinguishes Got Medieval from other medieval blogs it's that I think of it as a blog written by someone who happens to be a medievalist, rather than being the product of a medievalist who happens to have a blog.  I assume that my readers have some vague sort of interest in the Middle Ages, but not much more than that, and if I'm going to keep their attention I need to show them something that'll be interesting to people other than medieval scholars.  Obviously, I know other medievalists are out there reading the blog, but I tend to treat them as knowledgeable eavesdroppers on the (admittedly one-sided) conversation I'm having with the wider blogosphere.

This leaves Got Medieval in a weird position.  It's probably the blog that more non-medievalists would name should they ever be put on the spot and told to name a "medieval blog,"*** but it's really on the margins of the more rigorous happenings on the medieval blogs proper. As you might expect given my love of marginalia, I'm OK with that.

*"Oh, so after school you'll go manage one of those Medieval Times restaurants?"
**For a medieval blog, I mean.  It's not like I'm Wonkette or Go Fug
Yourself or anything.
***That's the only explanation I've got for PC Magazine naming the
blog to its top 100 blogs of 2008, at least.
Posted by Jeffrey Cohen at 7:28 AM