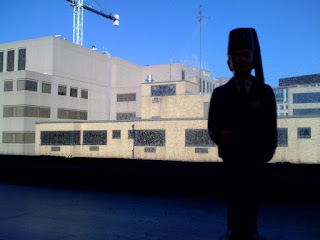 After almost four years, my time as chair of the English Department of the George Washington University nears its termination.

I'll miss it. Having the chance to get to know my colleagues so well, learning how much their friendship means, having the ability to help them when problems arise, being in the middle of things: all of these are hard to leave.

My position as chair has offered plenty of fodder for this blog (election! memos! bungee cord chair! refusal of a second term! cash infusions! famous writers! take your child to work! strategy! annoyances! creativity! stages and spotlights and lecterns! And so on). But that is not why -- no it really is not why -- I took it. I believe that one loses the right to complain about an entity if, when given the chance to work to change its structure, one declines. So now I have earned the right to whine, bleat and carp until the crack of doom. Colleagues, beware: I will be that infamous faculty member who routinely harrumphs "Well when I was chair we used to find wads of cash in our desk drawers and the queen flew us to England for marmalade-smeared crumpets and we never fought and we had no problems and rainbows shimmered all the day long." Sweet, it will be, repeating my nostalgic lies.

Now I am slowly packing my books for the move to my new digs. I'll miss my office, with its beautiful view of I Street and prospect of Pennsylvania Avenue and passing popes. I'm descending from the seventh to the sixth floor, mainly to be out of the way of the new chair: she doesn't need a whining, bleating and carping former chair hanging around to tell her about how things were in his day (see above). Besides I find it so much more fun to sabotage her behind her back. And when she looks at the budget and beholds the hole I've dug for her ... well, let's just say that the fiscal austerity that I've compelled her to enact is going to make my reign look like the golden age by contrast. Trivia: no chair in GW's history has ever -- so far as I can tell -- expended so much of the department funds on wine and champagne.

So the Tiny Shriner sits alone on his ledge, the very shelf on which he made his first appearance on this blog when I learned that my new window leaks. He is headed down a floor with me, to an out of the way abode that I call the Hermit Hut. It's an undisclosed location, so don't bother trying to track us down after January 1.
Posted by Jeffrey Cohen at 3:13 PM

Richly deserved Congratulations on the end of your tenure! May your dotage be long and grey, interrupted only by the pops of champagne corks.

Thank you, Karl! Next time you visit GW I will be in exile in my new abode. No more access to that champagne fountain in the main office.