Animal Language and the Burden of Understanding 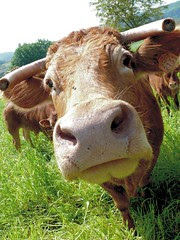 The sixth-century Grammarian Priscian defined "vox" as "aerem tenuissimum ictum vel suum sensibile aurium" (air very subtly struck or its sensible effect on the ears), a definition that, as Marcia Colish (whose translation I use here) observes, "deprives the ear of any active role in sensation, leaving it a purely passive recipient of the data impressed upon it by the sensed object." Keep this passivity in mind for what you read below.

There are two forms of the voice, distinct and indistinct. The distinct is that which, when heard, is understood and written and therefore explained to many and is said to be understandable to many....The indistinct however is that which is nothing but the single sound of a voice cast out, as is the neighing of a horse, or the hissing of a snake, or clapping, hissing, or other such things.

Last night, I explained this to my Animals, Saints, and Monsters seminar, who were unsure/upset about my assertion that, barring the Skeptics, the Western philosophical tradition by and large asserted that animals lacked language. As I realized--realized, in fact, at the very moment I was doing this nutshell version of medieval grammar--the problem with animal noise for Marius, Isidore, and Thomas is not that, for example, the animal vox can't express abstract concepts. For the definition of vox brackets the question of vox's actual content, just as much as Priscian's definition of vox brackets off its content in favor of what happens when, and if, vox strikes the ear. Thus the definition of vox depends not on what it is but on what can be done with it.
Or, to put this in break-up language: it's not you, it's us.
The implication in Marius, Isidore, and Thomas is that if human written language could be improved, animals could be recognized as having "voces articulata." There is, surprisingly (to me, anyway), an implicitly skeptical element concerning animal language in medieval grammar. Recall Sextus Empiricus:

we certainly see animals -- the subject of our argument -- uttering quite human cries, -- jays, for instance, and others. And, leaving this point also aside, even if we do not understand the utterances of the so-called irrational animals, still it is not improbable that they converse although we fail to understand them; for in fact when we listen to the talk of barbarians we do not understand it, and it seems to us a kind of uniform chatter. Moreover, we hear dogs uttering one sound when they are driving people off, another when they are howling, and one sound when beaten, and a quite different sound when fawning. And so in general, in the case of all other animals as well as the dog, whoever examines the matter carefully will find a great variety of utterance according to the different circumstances, so that, in consequence, the so-called irrational animals may justly be said to participate in external reason.

For key examples of human linguistic difference from animals as animals lacking something humans have, see Isocrates (354 BC) To Nicocles 3.5-6:
For in the other powers which we possess we are in no respect superior to other living creatures; nay, we are inferior to many in swiftness and in strength and in other resources; but, because there has been implanted in us the power to persuade each other and to make clear to each other whatever we desire, not only have we escaped the life of wild beasts, but we have come together and founded cities and made laws and invented arts; and, generally speaking, there is no institution devised by man which the power of speech has not helped us to establish

Or, more influentially for the Middle Ages, Cicero, De Oratore, 1.8.32, "For the one point in which we have our very greatest advantage over the brute creation is that we hold converse one with another, and can reproduce our thoughts in word."

I know, Karl, that you'll want to draw a boundary between medieval scientific work on acoustics and imaginative literature ... but I can't help asking, what is at stake, say, in the magic ring in the Squire's Tale that translates bord speech? Anything of relevance, anything more than what Susan Crane has already said?

In that same essay, she cites Italian and Provençal poets who describe birds singing "'ciascuno in suo latino,' each in its own Latin" which leads to the borg...bird...language translator "thurgh which she understood wel everythyng / that any fowel may in his leden seyn" (5.434-5)

This gets at my realization about the peculiarity of medieval classifications of animal language as "confusa." The implication in SqT is that the birds have been talking all along, and, now, finally, a human linguistic frailty has been remedied. Canacee--or the Squire, through her and her ring--can now do what she/he could not do before, namely, write down bird speech. The magic is in human understanding, not in animal speech. Notably, then, Chaucer uses the noun "leden," whose denotations include speech, song, animal noise, and birdsong: the linguistic difference has been transcended without being eliminated...a point, incidentally, in harmony with how Crane ends her essay:

Canacee's inspired bricolage subsumes prior models of interspecies constraint, birdcage and mews, into an unprecedented structure that is simultaneously human bedchamber, avian tree, and garden of love. In this structure, Canacee moves her relation to the falcon from totemic, symbolic, and allegorical terms toward literal and physical terms. Yes, Canacee's empathy is contradictory. It recognizes species difference and declares it transcended. Holding this contradiction in place, the mews expresses the opposition inherent in 'kynde' between differentiation and lovingkindness

I think it might, then, be significant that the Squire interrupts himself at 5.401-8 ("The knotte why that every tale is toold / if it be taried til that lust be coold etc") at precisely the point when he's just told us for the first time that Canacee can now understand bird speech ("for right anon she wiste what they mente"). Mayhap he interrupts himself because he now imagines the profusion of language in a world now no longer linguistic only for and with human?

I thought this was quite a statement, coming from you:
I'm increasingly seeing medieval scientific and other classificatory work as irrepressibly imaginative.
How about the obverse: is imaginative literature reflective and formative of the scientific, theological (etc) imaginary? When it comes to animals, are we at that interface where generic solitude becomes difficult to maintain?

On a related question, what do you make of attempts to render inarticulate animal speech into language -- giving sheep and goats their distinctive baaas, cattle their lowing, crows their caws? Mere onomatopoeia? Does it matter that every language represents these animal noises a bit differently (a contemporary French dog might say oauf oauf; I don't know what an Anglo-Norman French dog would say!)

Hey, fascinating, Karl! I've been thinking about some of these ideas vis-a-vis birdsong and "jargon" (etymologically, birdsong) -- wonderfully helpful is Elizabeth Leach's *Sung Birds*, which deals with birdsong in grammatical theory and literary representation, and in the "practice" of birdsong, as form and topos for human singing within musical compositions -- Leach is a musicologist I think. The book is WONDERFUL: http://www.cornellpress.cornell.edu/cup_detail.taf?ti_id=4611

I am about to sound woefully uneducated, but: isn't it interesting that your two scpetics are both pagans, whereas there are early saints in the Christian canon, aren't there, who could understand animals or birds? I *think* Adomnán's Vita Columbae has such a miracle in it, which doesn't imply that this was continuous, but that when it really mattered, Columba could 'tune in', like a vision or some other temporary access to the supernatural. Irish Christianity comes pre-loaded with a whole range of other beliefs, of course, and then exports them! But I wonder whether this may at root be, if not actually a pagan-Christian division, a Classically-educated versus Biblically-educated one.

Illuminating posting and interesting comments here. The SqT thread certainly makes me wonder about Chaucer's relationship to bird utterances more generally... Karl, I'd be interested to hear more about what you might think of other Chaucerian moments when the articulata/inarticulata distinction collapses (for example, "kek! kek!" in the PF, or the the speaking eagle in HF - who sounds much like a grammarian in his discourse on phonation, acoustic theory etc.).

Birds (and the tricky speech/song distinction) have received lots of attention these days - any more thoughts on dogs and their language(s)?

@Jeffrey
is imaginative literature reflective and formative of the scientific, theological (etc) imaginary? When it comes to animals, are we at that interface where generic solitude becomes difficult to maintain?

I need to think a bit more about this, but, yes, absolutely. To take 2 works for my book-in-progress, Sidrak and Bokkus (a scientific work) and the Avowyng of Arthur (a narrative work) are, culturally speaking, mutually constitutive of each other when it comes to trying to tell the fable of human and animal identity. Their uncertainties operate differently--and this is perhaps the actual generic differences--but the uncertainties themselves, and the stories each aims to tell, strikes me as the same.

Mere onomatopoeia
I would have said yes as of Monday, but now I say no. The mere fact that animal noise CAN be written down, turned into letters, contradicts the claims that animal noise is unwriteable, merely confusa.

I don't know what an Anglo-Norman French dog would say
I can track this down. Here, by the way, is a GREAT Early Modern list of Latin animal sounds, translated into English.

The oddest one? "Tabanus dicit, The Breeze or Horse-flie saith."

Basically, I think there's more at stake here than onomatopoeia (especially because there isn't a similar set of standard verbs for, say, the sounds of rocks falling). I think I've stumbled into my next (after Siena) conference paper, and, if things work out, an article in 15 months or so. We'll see!

And, Julie, what AREN'T you working on! JARGON, from Birdsong! How cool is that? From the Anglo-Norman Dictionary:
jargun, jargon, jargoun; gargon, gargun

When/if I develop this further, I will DEFINITELY check out the Leach. Marc Shell's Stutter also has some great material on birdsong (did you know some birds actually stutter?).

And, Nicola, did I know about Fabricius ab Aquapendente? My goodness, no! Thanks much. Will peruse the article soon.

@JJ: fwiw, I remember the Cuthbert legends as one in which the animals don't so much speak to the saints as communicate with them through a kind of sign language. Howver, Cuthbert--like Ciaran, with his fox monk, can speak and be understood by animals. For Columba, I don't remember anything where the animals even get that much communication (see Waddell Beasts and Saints 40-48 and Bell, Wholly Animals 43-54). That said, your point is well taken, and it's one of lines of inquiry I'll happily pursue when I take this thing up further.

@JH, With Ch and birdsong, I suppose we have to distinguish between the 'merely' allegorical and actual birdsong. For now, I don't know, but I'm moderating a panel on this VERY topic in Siena! We'll see what develops. On dog noise, though, YES, especially in hunting, where huntsmen were expected to know the meaning of different kinds of barks. Susan Crane writes thoughtfully about this in the anthology Engaging with Nature (ed. Hanawalt and Kiser).

Related topic: medieval noise, which includes animal and environmental sounds. I edited a cluster on the subject six years ago for Exemplaria (16.2). My intro is here if you want to grab it.

Exemplaria unavailable at CUNY -- another glorious victory for closed access! All such text-bottlers deserve subjection to rough music.