Merlin as Vicar of Causation

Speculative September in NYC culminates, quite naturally, in Speculative Medievalisms II, because all good things lead to medieval studies. But I'm taking the train from DC early tomorrow morning so that I can attend “Speculative Realism: A Conversation with Jane Bennett, Levi Bryant, and Graham Harman” at CUNY followed by Eileen's class "Toward a Speculative Realist Literary Criticism” at the Public School. If my head doesn't explode by the end of those two events, well, then I'm not drinking enough nitroglycerin.

But I hope it doesn't explode, because that would be messy, and I'll be speaking on Friday afternoon and that is difficult when you are acephalic. I hope to see some ITM readers at Speculative Medievalisms, where I'll be linking Geoffrey of Monmouth with Graham Harman via Merlin, naturally enough.

Below, a small taste of my talk "Sublunary." Read up on your object oriented ontology, grab your Latin dictionary ... and go! 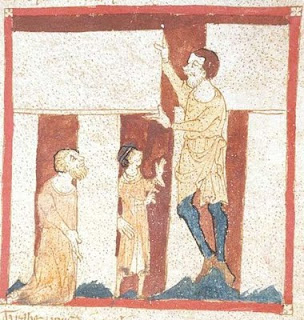 Graham Harman has argued that “Objects hide from one another endlessly, and inflict their mutual blows [“physical relations”] only through some vicar or intermediary” (“On Vicarious Causation” 189-90; pdf here). Merlin's advent suggests a medieval version of this statement that is just as true: “Worlds hide from one another endlessly, and enjoy their mutual embraces [“physical relations”] only through some vicar or intermediary.” Merlin’s birth is the weird result/enabler of an asymmetrical, humanly inassimilable relation. Merlin’s mother is a king’s daughter and a cloistered nun who nightly finds a handsome man in the solitude of her cell. The incubus-demon who fathers Merlin is of unknown biography and intentions. He sometimes touches the ordinary world, but just as often withdraws from terrestrial connection. His desires cannot be reduced to the merely sexual. He wants at times to kiss and hold the nun, at times to converse invisibly on unstated subjects. Merlin arrives, that is, through an abstruse relationship that unites for a while two beings from oblique realms. The angel-demon and the solitary princess never fully touch, or do so askew, in a conjoining that is textually enabled only backwards, through the strange progeny who makes possible and embodies their “shared common space” (Graham Harman’s term for the third object within which two others meet, 190) or “thalamus” (the word used for the nun’s cell, a Greek noun that also means “chamber” “bedroom” “bridal bed” and, metonymically, “marriage”: that is, the space of an unequal, complicated, potentially disastrous, possibly transformative caress). The relation between the nun and the incubus engenders a creature who if not wholly unprecedented is nonetheless unpredetermined.

The text that I am speaking about in this language that weds Object Oriented Ontology to Latin historiography is Geoffrey of Monmouth’s History of the Kings of Britain (c. 1136). Geoffrey’s history is most widely known for having bequeathed to the future the King Arthur of enduring legend. Without Geoffrey this provincial British warlord would be an obscure medieval footnote rather than the progenitor of a still vibrant world. At his first appearance in Geoffrey’s text Merlin is a precocious and quarrelsome young man. As the story unfolds he will reveal surprising abilities, demonstrating that seemingly inert rocks may contain within them bellicose dragons; foretelling grim futures that include incineration, poison, and flowing blood; enabling through his transformative potions an adultery-minded Uther Pendragon to engender Arthur. Merlin alters completely the timbre of the text in which he appears. The History of the Kings of Britain has until the moment of his entrance offered a chronicle of the island’s early days. Its sedate Latin prose describes how Britain was founded and who ruled its civil war loving kingdoms. Wonders and supernatural events before his advent are few. A tribe of giants to kill, a sudden rain of blood, a sea monster and some ravenous wolves are scant exceptions to a martial account of settlement, inheritance, dissent, and political intrigue. Merlin appears just after the first mention of magic in the narrative, in the form of incompetent magi whom the perfidious King Vortigern summons to assist him in finding a way to escape the persecutions of the Saxons. Merlin is not himself a magician; magi are figures of failure in the story. For Geoffrey of Monmouth Merlin is a prophet, a poet, a schemer, an architect and an author, a figure of singular ingenuity rather than of saintly or demonic inspiration. He cannot be domesticated into mere category.

After his unexpected advent the rules for how the story may unfold change. Earlier in the History when an earthbound king dreamt of traveling spaces of cloud and air, his fate was to plummet with his manufactured wings to a shattering death (Bladud, who practices “nigromantium” rather than magic, 30). That stretch between earth and moon had not yet opened for narrative sojourn. Merlin, however, born of the meeting of nocturnal radiance with mundane constrictedness, conveys the wheel of Stonehenge across the sea “with incredible ease.” This transmarinal relocation is not accomplished through supernatural agency. There is nothing divine or occult about the movement. Merlin works with the earth’s givenness, its alliance-seeking materiality. The monoliths are swiftly transported via his operationibus machinandis (“feats of engineering” 128) and machinationes (“machinery,” “engines,” “contrivances”). Merlin is an engineer, a vicar of causation who knows that objects launch into motion only through the intermediary agency of other objects. The stones are disassembled, loaded onto ships and carried to their current home for repurposing as a British monument, thus proving the power of ingenuity (ingenium, the Latin word that gives us “engineer”). Significantly, we are never told of what Merlin’s machinationes consist. A materialist but not a reductionist, Merlin knows well that “inscrutable depths” intractably hold the objectal world.

Merlin is likewise a vicar or engineer of diegesis. He moves the narrative, but cannot be absorbed back into it. He remains an essential mystery, a figure who changes everything and at a certain point simply vanishes, but even after his quiet disappearance his presence permeates what follows. Though he never meets Arthur, that king’s ambiguous destiny on Avalon is inconceivable without Merlin’s having set into motion the path of his ambivalent life. The text that Merlin creates is eccentric to what precedes: what sought to be history opens into a possibility-laden new genre, a mode to be christened in the future romance.Merlin embodies the strange prospects offered by that space inter lunam et terram, between earth's banal givenness and the moon's unreachable allure. This suspended geography might be called sublunary, but by that term I do not mean mundane. The sublunary designates a region neither terrestrial nor empyrean: unregulated by tedious rules about proper history, untouched by diurnal limitations, immune to the stasis that holds heaven. Sublunary means unpredestined by humans and gods, an intermedial sweep where the fixities of doctrine, custom and theology do not necessarily obtain. The wandering incubus who traces this space, celestial but not heavenly, a lover of earthly things but not bound to the small spaces of earth's human dwellers, imbues in his progeny the ability to escape constricted textual spaces as well.
Posted by Jeffrey Cohen at 4:41 PM