"Refuse the assumption of immutability": Will Stockton, Playing Dirty 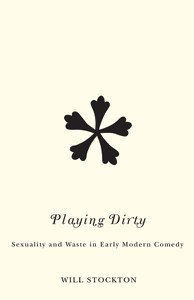 I had so many good intentions about my summer reading. I accomplished a fairly vast amount, and thought by the end of August that I'd be composing a massive blog post to ruminate over rocks, fire, fantasies of Aborginal culture, and ecotheory (because that is what I tend to read at the beach). But ... it didn't quite happen.

Nonetheless I do want to put up a brief post about one of my favorite books from those months, Will Stockton's Playing Dirty: Sexuality and Waste in Early Modern Comedy. Before I read this work I'd been thinking a great deal about psychoanalytic criticism, and why it had lost some of its appeal for me. Partly this rumination had to do with an essay I was writing that returned me to Lee Edelman's No Future (a book that ended up arguing has much to say about thinking the inhuman, especially in its concluding chapter). Partly, too, the "surface versus symptom" panel sponsored by Exemplaria -- and the theme of a February conference to be held by the journal -- had me considering the psychoanalytical approach's potential but also its limits.

Stockton's "analytically promiscuous" (xx) book helped renew my belief that a queer psychoanalytic praxis doesn't have to end in disembodied (anti)sociality, negativity and predictability. Smart, well written, and wide-ranging, the book is also (dare I say it?) fun. Its queer bodies "bear the burden of ahistoricity and excrementality within straight or linear narratives of history and civilizing process" -- and therefore includes women, fat people, aristocrats, Jews, and homosexuals. It's quite a mix. And quite a dirty book. That's not an asterisk on the cover.

The chapter on The Unfortunate Traveller and anti-semitism is a tour de force, while that on "Shakespeare's Ass" presents a Falstaff I've never seen before, as well as some puns that will make you groan. My favorite passage comes at the end, in a chapter on "The Pardoner's Dirty Breeches." Stockton begins with the Canterbury Tales but ends up with a much larger, more inspirational claim:


These playful exchanges repeatedly place The Canterbury Tales at the contested foreground of early modernity. They also demonstrate that the Symbolic is mutable and pluralistic, always open to contests of signification and translation that recalibrate reality itself. Though quite queer, the Pardoner acts as if his cynical confession does not generate the contest that it does, as if the ideologies that shape reality itself were not amenable to change. Especially in our present political climate, where much homophobic rhetoric is so absurd as to raise the question of belief, it is key to not becoming similarly cynical that we who identify as queer refuse the assumption of immutability, and that we do not relinquish the ability to speak -- and why not kynically? -- truth to power. (118)

As you can see, there is much in this book for medievalists and early modernists, as well as for anyone interested in psychoanalytic approaches to literature and queer theory. It's also a great book to carry around so that you can explain the cover to the unsuspecting. I've never grossed out and fascinated my 14 year old son so thoroughly.
Posted by Jeffrey Cohen at 12:08 PM