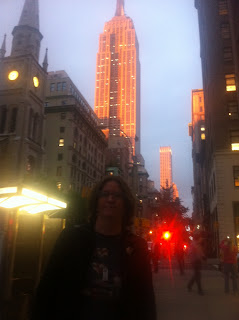 Tonight we will be celebrating the launch of Karl’s beautiful new book in farthest Brooklyn, but before those festivities begin I thought I’d take a moment in the quiet of my hotel room to jot down a few notes about the Speculative Medievalisms conference at CUNY yesterday.

Actually, I’ll start with the CUNY panel from Thursday night, where Jane Bennett, Levi Bryant and Graham Harman presented. Jane was the first speaker, and reflected upon the sensibility or “mood component” of Object Oriented Ontology/Speculative Realism via a meteorological analogy: “sunny, clear and cool,” like the “dude philosophers” who blog its contours. She then spoke of ethics as sensibility formation and proposed that OOO might think more about earthiness (which she glossed as the sensuous specificity of everyday things) and sympathy (attractions and connections between similarities). Her avowedly “leftist, egalitarian” approach would attend to things as earthly forces, to presencing over reserve. She called this a new material sensibility, and concluded “What would it mean to start living differently, sensing differently, if we were to really believe in OOO?”

I wish I could have stayed for the discussion that followed, since the answer to that question haunts me … but just as Levi Bryant began talking about SR as a movement towards what he calls the Wild, several of us had to depart to attend Eileen’s lecture at the Public School on SR and literary criticism. Held in an architecture bookstore, the event drew about 30 people from various backgrounds who sat on steps and listened to Eileen give a swift survey of Thing Studies and then speak engagingly about how the field had influenced her own work. Eileen was eloquent. She spoke with the open doors of the small store behind her. Passers by would peer inside, sometimes pausing to eavesdrop. One man passed twice, performing an awkward grand jeté each time. The weather was changing, gusts of cool wind entering as punctuation marks for Eileen’s talk: a perfect conjunction of world and speech.

The Speculative Medievalisms confab the next day was well attended (about 90 people) and lively. Eileen’s opening remarks stressed speculation as a rigorous process (though I personally would frame it as a creative process that may or may not be enamored of rigor); an investigation of the possible; a displacement of language as the reigning and sole determinant of meaning; and the granting to things of their full mediating power. Anna Klosowska then spoke about illegibility, translation, remembrance, willed forgetting, and a kind of capacious and tolerant philology. Allan Mitchell was all about cosmic eggs, exploring the rich possibilities of tarrying with the seminal, gestational moment that the ovum offers. He touched upon how such cosmogenic eggs enable a thinking about the substantiality of the cosmos that the Genesis narrative does not allow, an intriguing medieval “thinking before the human.” Kellie Robertson detailed the historical multiplicity of Aristotles – that is, the ways in which the philosopher has been appropriated and changed throughout time, yielding a longue durée of unease with him (“every age engages in a romance with Aristotle that ends unhappily”). She looked specifically at Aristotelian inclinatio and its de-centering of the human, gave us a preview of Graham Harman’s work later in the day, and provided an unforgettable image of Harman riding the philosopher as if he were Phyllis. Drew Daniel in his response excavated a small counter-archive of Aristotles, including Ockham’s “lynx-eyed” version of the philosopher, and wondered about alternate possibilities.

After a lively lunch (many of us went to a Chinese-Indian fusion restaurant nearby that I like), we returned to the archives: Julian Yates brought to light a kind of “kitchen archive” in Shakespeare, one on which a recipe (and recipes are playscripts, as well as a kind of metaphysics) might break into a drama like Titus Andronicus and pose weird questions about how to live well. Yates assembled a kind of machine or mangle out of Shakespeare, Bruno Latour, Titus, and a French housewife named Irène that worked beautifully to connect recipes, mortality, and ethics. He was assisted immensely by the fact that the early modern English word for piecrust is “coffin.” Liza Blake gave a response that wondered about what an OOO practice of critique would actually look like, taking Harman’s Prince of Networks as her point of departure.

After my presentation, Ben Woodard gave a fantastically smart response which used synopses of two moon stories as a launching point for following a winding path through a long philosophical tradition … a path that converged beautifully (I thought) with the one I tried to create via a more literary tradition. The questions I was asked – like the queries posed throughout the day – were intense and complexly engaging. Props to Dan Remein, though, who figured out that my “textual laboratory experiment” wasn’t just about placing OOO next to medieval texts to see what ignites, but also a wondering about how a scholarly work can ever adequately acknowledge the crowd of people behind its making. Graham Harman’s talk, delivered rapidly and lucidly, reiterated his own approach to objects at length, demonstrated why other ways of understanding objects are beset by philosophical problems, and then rethought Aristotelian possibility in ways that resonate with the OOO project. Patricia Clough’s response reframed the OOO mission as a multi-disciplinary alliance (science, art, philosophy) that opens an aporia between ontology and epistemology, productively enabling the object to BE as it was never allowed before.

A wine reception followed, and then a long, slow dinner at a restaurant with food inspired by Brittany. We then moved to a trendy bar that was a little too loud and a little too filled with the fragrance of the whole pigs that people were ordering in the attached restaurant … so we wandered over to another bar tucked into a nook of a small hotel. “Lounge” would be a better word: the place looked like it had been built in 1970 and tenderly preserved henceforth. As our numbers steadily dwindled, we moved to the Ginger Man, a pub, and when that establishment closed at 3:45 it was time for karaoke. A magical two hours of Journey, Green Day, Spandau Ballet and I don’t know what else brought us to 6 am and the rising of the sun. Not a bad little day, all in all.
Posted by Jeffrey Cohen at 3:20 PM

I would loved to have heard what Eileen said about speculation but, by Friday, I was all OOOed out. The term came up several times in several presentations, generally framed by a bit of embarrassment. Which I find just a bit strange as speculation is a major mode of thought for me, right up there with description. Some years ago I published a book on music (Beethoven's Anvil); the preface was entitled "Speculative Engineering". Here's what I said about speculation:

I have used empirical evidence wherever I could, but we don’t have enough evidence to cover the ground. There are gaping holes which I can only fill in with speculation. . . . Thus I like to think of this book as an exercise in speculative engineering. Engineering is about design and construction: How does the nervous system design and construct music? [The book] is speculative because it must be. The purpose of speculation is to clarify thought. If the speculation itself is clear and well-founded, it will achieve its end even when it is wrong, and many of my speculations must surely be wrong. If I then ask you to consider them, not knowing how to separate the prescient speculations from the mistaken ones, it is because I am confident that we have the means to sort these matters out empirically. My aim is to produce ideas interesting, significant, and clear enough to justify the hard work of investigation, both through empirical studies and through computer simulation.

Thank you for the comment, Bill, as well as the quote: your book sounds terrific.

I do believe that speculation can clarify thoughts, among other things -- but those other things are just as important to me: making, renewing, envitalizing, transforming...

Yep, thought has many needs, and language has many modes to meet them,