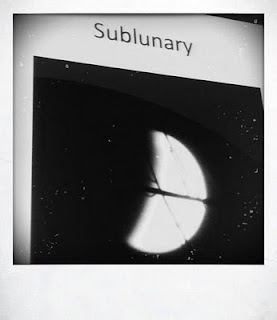 I introduced my talk at Speculative Medievalisms as a textual laboratory, an experimental mixing of worlds that do not often touch through modern and medieval texts (a philosophical essay, a work of historiography, a Breton lay) that are about how unlike worlds touch and what happens in the aftermath of that encounter. My aim was to take Object Oriented Ontology seriously: not as a critical mode to be applied, but as an articulation of concept/tools that might reconfigure how we think about the workings of some narratives ... as well as how these narratives in their workings potentially transform these concepts when they enter their worlds. It's part of an ongoing project that may become a book, provided I someday actually get Stories of Stone written.

The talk appears below. During the Q&A, Dan Remein perceptively asked if there wasn't more going on with its angels than what OOO could account for. I answered that yes, doubly: they are partly inspired by the work of Michel Serres, who is not exactly a speculative realist (though much of what he has composed is in sympathy with SR projects). More importantly, though, these erratic and essential intermediaries carry with them a quiet meditation on how no matter how exhaustively we attempt to articulate our debts, no matter how much we insist that we have been inspired by others and that nothing we do is solitary and that any good scholarly project is a communal work, those essential to its coming to being always fade. The project breathes, and its coming into life becomes a series of enigmatic traces. That vanishing is an injustice, but I have not found a more just mode of doing work.

The passages I treat from Geoffrey of Monmouth on Merlin may be found in on the web here (Book 6 chapter 17-18; Book 8 chapter 1-19; this is obviously not the translation I use), and Sir Orfeo is available as an e-text in its entirety.

The Annales Cambriae opens British history with the terse line, 573 The Battle of Arfderydd. D. N. Dumville calls it the 'historical horizon' of British history and it is here in a 12th cen m.s of the Annales that an improving scribe will add that Merlin fled the battle mad into the woods. The place where his prophecy begins.

He is placed right at the start of our dreaming and stands looking out at the whole of the story as it unfolds, speaking of what has past,what is present and what is to come.

A most interesting figure.

I didn't know the Gervase of Tilbury reference, which is very interesting. I mean, the whole paper is full of interesting things I didn't know but that one catches at me especially because of its comparability to the mention by Bishop Agobard of Lyons in the ninth century that peasants he deals with think men come from a place called Magonia in ships in the sky and steal the peasants' crops. The ones they catch don't suffocate, but it reads as if they nearly got lynched. (Now what'd Gervase's guy suffocate from, d'you reckon...) I am guessing that you know about this reference and didn't use it here because it's near Geoffrey neither geographically nor temporally, but in case you haven't met it I have some references at the end of this post of mine.