How to Raise a Medievalist, continued 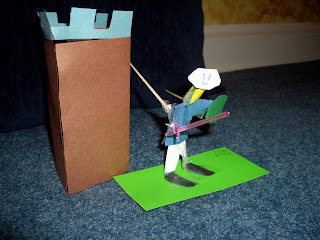 Remember those posts from the days of yore when I would talk about how I was molding Kid #1 to become a dessicated scholar of the moldy past like myself? Remember how I used a cute mouse to force Latin down his throat? Remember all those Horrible Histories?

Well, inspired by two new volumes from Terry Deary (The Stormin' Normans and The Smashing Saxons -- because Hanukkah has eight days, it invites giving series books ... and why not teach the Conquest from both sides of the divide?), Kid #1 has started to fashion little medieval soldiers out of construction paper, paper clips, and Scotch tape. Above you will see a scary creature that bears the label "Saxon Militia." Its sword can be raised and lowered using the protruding toothpicks so that he can battle the "Norman foot soldier" (not shown, but very similar in appearance).

As a footnote, last night Kid #1 sent a fan email to Deary saying how much he enjoyed his books, especially the gross parts. Deary wrote back almost right away (surprising, because the man has more than ten million copies of his works in print) with a personal and quite nice note. It was signed "Enjoy your reading, enjoy your life, Terry Deary."

Words to live by.

And, speaking of cute mice like Minimus: a strictly nonpedagogical one will be holding my family captive starting tomorrow. We will be traveling here, here, here and here, and we'll get there via this. If I do blog, it will be to the tune of "Supercalifragilistic."
Posted by Jeffrey Cohen at 8:31 AM

Beware. My parents made sure that I knew the structure of DNA before I could speak, and I spent all day today reading a Latin treatise on cipher-writing from the fifteenth century. Just wait until those adolescent years -- he'll become an astrophysicist and break your heart.

Liza: my aspiration at the age of eight was to be an astrophysicist, so my heart won't break all that much. Seriously, though, while I'm touched by his emulation I know it won't last. That's OK, and healthy.

Must be something about medievalism and physics then. My son is off to read theoretical physics at University next year - though his particular interest is high energy physics not astrophysics. He too was once keen on toy soldiers and history/mythology (and we have a ton of lego and playmobil to prove it). Too bad you are too far away to take it over from us.

Physicists are the new 'high priests' of our times perhaps?

St. Martin's/Maarten's is the second most beautiful place on earth in my opinion(next to St. Lucia and Newfoundland, which are tied).