The body remembers its pleasures 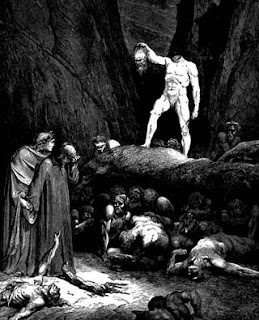 Medieval visions of the afterlife are replete with bodies eternally punished for the excesses of enjoyment in which they indulged in life. The fires of hell are simply a literalization of the flames of lust to which sinners succumbed during their terrestial sojourn. Dante is particularly adept at this kind of poetic justice, providing an aesthetically pleasing orgy of tortured flesh, agonies without endings. In his infernal realms, for example, those who read the story of Lancelot and are pushed to indulgence by its lascivious example spend their time after death blown by relentless winds, the restless and irresistible gale of their own passions.

I was thinking about Dante during my recent vacation not because it was in any way reminiscent of hell (at least not for me; I can think of many people, though, for whom being trapped aboard a Disney ship would be worse than finding oneself shoved up Satan's ass like the poor friars in Chaucer's "Summoner's Tale"). As Eileen observed while I was gone, sometimes we want to declare that we eat certain things simply because we are hungry -- that is, we as scholars tend to think think think about everything, so that each forkful headed towards the maw is freighted with a cultural and historical significance that makes the utensil almost too heavy to lift. Sometimes this inability to turn off the Super Meaning Detector is wearying, and we fall ill with blog ennui. Most of the time, though, we get good (even meaty) insights out of such reflection.

Back to Dante on the Disney ship. Most of the time I was pleasantly and mindlessly enjoying myself with my family. Let me get the sappy part over with: being with my family intensely for seven days straight made me realize how fortunate I am to have such amazing people in my life. Wow.

OK, back to the disembodied and non-sentimental scholar who makes cutting remarks about other people's enjoyments to mask his own maudlin core. An interesting thing about drifting the Caribbean with a boatload of fellow tourists intent on eating, drinking, purchasing and consuming as much as possible was to see, amply, how every pleasure the body embraces is recorded by, stored inside, remembered within the flesh. It does not take a personal declaration that you have been snacking on artificially flavored salsa chips and "creme" filled non-baked goods to make obvious to the world the fact these have been your enjoyments: your flesh keeps that record for you, expanding to store the adipose memories of those pleasures. Sadly, it doesn't take twenty or thirty years of such binges to leave the body altered: I was amazed at how many young children already carried with them the history of their overeating. Smoking, similarly: the face, the teeth, the skin betray the length of this chemical love affair. As those who have examined the Blogroll (at right) know, I have an amateur's passion for archeology. I find it fascinating how the bones of the dead can be read to reveal fragments of their living stories. On this vacation, though, I couldn't stop reading the living. Perhaps out of my own guilt at being such a consumer (why did I keep thinking of Jamaica Kincaid's "A Small Place" as we sailed to St Martin, St Thomas, the Bahamas ... ?), I overcompensated by judging those less frugal with their pleasures.

Every narrative needs its epiphany, so here's mine: when it comes to the body I'm mired in the medieval. It's hard for me to think of corporeality and enjoyment without immediately connecting it to some price to be paid.
Posted by Jeffrey Cohen at 7:34 AM

This post has given me my own epiphany. When you wrote this --

I find it fascinating how the bones of the dead can be read to reveal fragments of their living stories.

-- I thought, "That's *exactly* why I like CSI so much (the original, that is -- Miami and NY suck)." And I never realized how kind of Dantean that show is. Although the right hates it because Grissom is never judgmental about the sexual proclivities of the victims and witnesses he meets (not every show is about sex, but it's Las Vegas, so many are about sex), I've always noticed that the narrative does indeed punish them, usually in some appropriate way (and much more subtle than the movie _7_) and Grissom et al. are able to read their (sexual) stories on their flesh.

OK, end of digression on CSI.

the medieval. It's hard for me to think of corporeality and enjoyment without immediately connecting it to some price to be paid.

No! Of all people you shouldn't use the word medieval like that.

You are surely not implying that all medievals rejected delight in things corporeal - or connected corporeal pleasure with spiritual sin and ultimate punishment?

To hell with those clerics ...

N50: you are right, of course: I'm using medieval in the pejorative way that we medievalists typically fight against. I guess what i meant to say is that I haven't escaped from that modern cliché of the monolithic and mean spirited Middle Ages so much as I thought I had ... even after writing so much about a Middle Ages of joy and invention.

Every narrative needs its epiphany, so here's mine: when it comes to the body I'm mired in the medieval. It's hard for me to think of corporeality and enjoyment without immediately connecting it to some price to be paid.

Sister Mary spent many an afternoon trying to convince me to think like that.

Right. And to be clear: it's not that I'm satisfied with that kind of thinking, and it's not that I believe such folding of punishment into pleasure represents the monolithic thought of the Middle Ages ... it's just that I was somewhat surprised to find myself making those silent assumptions, even after so many years of trying to think the Middle Ages in other, more affirmative terms.

Alright, my reference to Catholic training aside, I think there *was* definitely a literary conceit -- since we can't assume popular belief -- that made connections between the state of the spirit and the state of the body in the Middle Ages. And in all the ages from then until now, actually. Perhaps it was not always a Dante-like (how does one make 'Dante' adjectival, anyway?)connection of sin and punishment as two sides of one coin, or that an unpleasant personal appearance is somehow an earned punishment. But I do think that we have many representations of the spirit leaving its mark somehow on the body which it called home.

Full Disclosure: I still seek 'other evidence' of pettiness when I see a person with a pinched face.

It's funny, Heo, that conceit (the body makes manifest in the flesh its interior moral state) is what I'm thinking about intensely for my presentation on Richard III at the Shakespeare Theatre Sunday. I think it's intimately related to the femininity/monstrosity/poetry linkage that we've been noticing seems transhistorical: humans tend to seek out, discern, inscribe the interior moral state on the face, the form, the figure.

And it is not as if some linkage isn't justified: smile long enough and you begin to feel happy, as your body reads its emotional state from the position of its features ...