The monkey astride your subconscious tiger 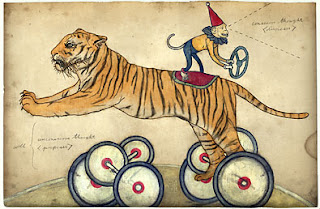 Those readers who have (like me) followed Eileen's musings on ITM about the retroactivity of consciousness and the problems of free will (such as here and here and here, and in the comments here) will also be interested in this article from today's New York Times. Dennis Overbye writes, a bit too flippantly, about current research into the question of free will. For him, it's all about dessert (read the piece and see if the last line doesn't make you groan -- didn't see that coming, did you?) The essay does survey, however, some interesting research on the topic, asking whether "the conscious mind is like a monkey riding the tiger of subconscious decisions and actions in progress, frantically making up stories about being in control."

That zany bestial metaphor plus the accompanying illustration make the short piece worthwhile. I think it was William Blake who once mused "Tyger, tyger burning bright / Circus simian ever alight ..." Wasn't it?
Posted by Jeffrey Cohen at 8:34 AM

Thank you, JJC, for the link to Overbye's article in the New York Times on free will. I was especially struck by this quotation:

"Mark Hallett, a researcher with the National Institute of Neurological Disorders and Stroke, said, 'Free will does exist, but it’s a perception, not a power or a driving force. People experience free will. They have the sense they are free. The more you scrutinize it, the more you realize you don’t have it,' he said."

I've read a lot of the literature, in cognitive philosophy and neuroscience mainly, over the issue of whether or not free will is mainly, as described above, a very powerful "perception" or a reality, and I always find myself equally troubled and fascinated by the subject. Anyone who has ever had any kind of experience with addiction [or any kind of compulsive behavior] already kind of knows that "free" will is a vexed entity, whether perceptual or otherwise. We often invent several "selves" for different facets of our identity and pit them against each other in elaborate narratives viz. our various struggles in life--career-wise, ideological, spiritual, physical, etc., and these inventions often fly in the face of scientific explanations of "mind." But one thing, or "fact," that does inhere in both "magical" and more scientifically-oriented explanatons of the "self" is the importance of narrative-like structures of thought in our processes of self-cognition and self-actualization. It is interesting to hear scientists kind of "diss" or use narrative as a way of explaining how we don't, for example, possess free will, when in fact, it could be argued that it is precisely because we are story-/meaning-making animals that we are able to even have this philosophical discussion at all. Obviously, much of what we do is unconscious--indeed, our day-to-day existence often depends, critically, on that fact [otherwise, how could we even walk out of a door?]--but much of what we *also* do hinges to a certain extent upon our critical reflection upon our mainly unconsciously-driven actions, and it is in that reflection that we become, in a way, most human. Having the ability to critically reflect upon our behavior does not, of course, always directly lead to our ability to consciously change our actions in a certain, directed way [so that, for instance, in certain love affairs we often act against our best interests in order to satisfy a certain secret thrill, or we knowingly drink ourselves to death, etc.], but it does allow us the possibility of a freely-directed choice, although I suppose some neuroscientists will contend that even that supposedly freely-directed choice could be shown to also be a kind of unconscious impulse, BUT [don't you love these long sentences?], I also see in all this the very opening to art, or the artistic life. Perhaps to be human is to accept, on the one hand, that you don't have much of a choice in anything, but on the other hand, to also "dream" ["narrate"/"know"] all the other possibilities, and to also slot into various narrative structures unconsciously-driven causes and motives and outcomes, in order to make of the somewhat unscripted chaos of life an artwork of sorts. I must say, though, speaking from my own experience, that much of life does seem to unfold along paths of the least cognitively, freely-willed resistance. What if we were to write a history of *that*--how everything happened *un*consciously and despite the better, fictively-shaped intentions? In this scenario, ethics is only a dream.

Great comment, Eileen. I knew this article would appeal to you.

Mark Hallett was the most pessimistic of those interviewed for the piece. He reminds me of many extreme Darwinians: it's all in the genes, it's all programmed by evolution, it's all determined far in advance. That's why I liked the turn to "emergent phenomenon" later in the article. Here is a great quote:

These so-called emergent phenomena, like brains and stock markets, or the idea of democracy, grow naturally in accordance with the laws of physics, so the story goes. But once they are here, they play by new rules, and can even act on their constituents, as when an artist envisions a teapot and then sculpts it — a concept sometimes known as “downward causation.”

The idea that such emergent phenomena can alter the very system that gives rise to them helps to move us away from the reductionism, teleology and flat determinism that haunts so much writing about evolution and consciousness. The philosophical counterparts to this kind kind of thinking must be the work of Deleuze and Latour.

I read this article in the Health section right after the piece on free will. I was struck by these lines:

education, Dr. Smith at RAND finds, may somehow teach people to delay gratification. For example, he reported that in one large federal study of middle-aged people, those with less education were less able to think ahead.

“Most of adherence is unpleasant,” Dr. Smith says. “You have to be willing to do something that is not pleasant now and you have to stay with it and think about the future.”

He deplores the dictums to live in the moment or to live for today. That advice, Dr. Smith says, is “the worst thing for your health.”

Free will -- in the form of being able to make choices that benefit your future self rather than your present one -- seems to be more securely in the possession of the well educated ... !