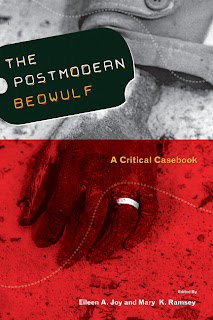 The Postmodern Beowulf: A Critical Casebook, edited by myself and Mary Ramsey [and including a reprint of the essay, "The Ruins of Identity," by our beloved JJ Cohen], is now officially out from West Virginia University Press. I offer here a brief bit from the Introduction, "Liquid Beowulf," written by myself and Mary Ramsey, as well as the table of contents. At a mere $45.00 and 772 pages long, it's a hell of a bargain! Cheers.

Bodies (both dead and alive), history, and language, and all of the fiercely tangled relations between them—what do the dead want from us, what might we want from each other at any given moment, and how might we sufficiently record our past and present histories in order to lend some kind of meaning and ethical content to what some of us fear, deep down, is a kind of unscripted chaos? How, further, can the past inform our future in a way that is ethically and socially constructive? These are the questions that resonate throughout Beowulf and also modern life. However insufficient some of W.P. Ker’s commentary on Beowulf might seem to us today, some of his remarks on Beowulf in his 1904 book The Dark Ages strike us as smartly sensitive to the issue of what might be called Beowulf’s historicity, and to the ways in which the poem speaks, not of history itself, but of the anxiety of being undone by history, of being erased in its ever-shifting currents and concerns, of being outright torn apart and killed by it and then consigned to oblivion, to a place where no one remembers anything at all. Following the thought of Gerhard Richter on Anselm Kiefer’s art, Beowulf “presents itself in the strange figure of a singularity that meets in unforeseeable ways with the generality of its historical and philosophical structure,” and long before many other scholars were willing to concede the matter (and some will still not relinquish it), Ker recognized that the history contained in early epic poetry is always already transformed by a unique artistic sensibility (what Ker called the epic, or heroic imagination) which, having admitted that the actual history of war and warriors is itself too politically complex for poetry, “turns by preference to adventures where the hero is isolated or left with a small company, where he is surprised and assailed in a house by night, as at Finnesburh, or where he meets his enemies in a journey and has to put his back to a rock.”

Ultimately, the poet’s “subject matter is not purely material; it has been idealized more or less before he takes it in hand.” Further, “the actual world, so infinitely more complex than the world of heroic poetry, was nevertheless occupied in the Dark Ages with the heroic ideal.” So, even before history is turned into poetry, it already is poetry, and the artwork, whether Beowulf or The Battle of Maldon, is a singular expression of a narrative imagination, in Richter's words, “concerned with the Sisyphean task of working through history and its imbrications in the mythical: to attempt to come to terms with their ghostliness, but also to employ them as the vexed prime material out of which a thought may flow into artistic form.” In this sense, the “historical”—whatever that may mean—is not recoverable in the poem, and even when we labor to locate analogues for historical figures and events (and for historical concerns) within the poem, as Michel de Certeau would remind us, “the historical figure is only a dummy,” and “the past is a fiction of the present.” But what is historical about “heroic poetry” is the way in which it reveals, following Ker, what might be called a cultural occupation with that moment when the idealized hero has to put his back to a rock. In all times and places, whether under threat of violence and extinction—by Vikings or the Khmer Rouge—or under the obligation to either rush into the breach or out of the foxhole, such heroes are dreamed, and also killed off. Perhaps the poem relates to our present moment, finally, not because it either is or is not a comforting grand narrative, is or is not a story about things that might have really happened, is or is not a type of window, however opaque, upon a past related to us through genealogy and a “desire for origins,” but because it expresses some of the wish fulfillment, and also the anxieties, of a human memory troubled by history—in the same way that we continue to be troubled by history and our relation to its silences and blank spots, its dark fissures and violent effacements, its holocausts and other zones of devastation.

At the opening of the House of Literature in Stuttgart in 2001, the late writer W. G. Sebald, who grew up in the aftermath of Germany’s destruction during World War II, gave a speech in which he ruminated how, as an author of fiction, he had devoted his life to “adhering to an exact historical perspective, in patiently engraving and linking together apparently disparate things in the manner of a still-life.” He recalled that, as he was riding the S-Bahn train into Stuttgart in 2001 on a winter night, he could not help himself from thinking, when he reached Feuersee Station, “that the fires are still blazing above us, and that since the terrors of the last war years, even though we have rebuilt our surroundings so wonderfully well, we have been living in a kind of underground zone.” Likewise, he found himself imagining how the “network of lights glittering in the darkness” of Daimler Corporations’s new administrative complex was “like a constellation of stars spreading all over the world, so that these Stuttgart stars are visible not only in the cites of Europe and on the boulevards of Beverly Hills and Buenos Aires but wherever columns of trucks with their cargoes of refugees move along the dusty roads, obviously never stopping, in the zones of devastation that are always spreading somewhere—in Sudan, Kosovo, Eritrea, or Afghanistan.” What, Sebald finally asked, in such underground zones and (paraphrasing the poetry of Hölderin) in “the dark of an all too sober realm where wild confusion prevails in the treacherous light,” is literature good for? Sebald’s answer was that “[t]here are many forms of writing; only in literature, however, can there be an attempt at restitution over and above the mere recital of facts, and over and above scholarship.”

We would like to argue that, similar to the poetry of Beowulf or a work like Sebald’s novel of post-Holocaust experience Austerlitz, scholarship can also be a “restitution,” as well as an artistic (even poetic) intervention into history that engraves and links things together in the manner of a still-life in order to, in Richter's words, “grasp the ways in which [history’s] images flash up only in the fleeting moment that illuminates . . . a field of endless relations that cannot be reduced to any realist or literalist concern.” And this is why we chose for the cover of our book the Peter Turnley photograph from the first Gulf War of a dead Kuwaiti soldier’s hand resting flat in the sand of the desert—a hand, moreover, that has been partially carbonized by unimaginable heat, and on the third finger of which a gold wedding ring is clearly visible. Why this photograph? According to Bruce Gilchrist, who found the photograph first and brought it to our attention,

“It speaks in the synecdochic language of the associative violence of war, the traumatic effect of violence and the frank horror it creates in us as witnesses; it is only a wrist and hand, partially ruined by fire, as is the Beowulf manuscript, as is Beowulf’s pyre, as is the Finnsburg pyre on which the heads and helmets of Hildeburh’s beloved husband and son burn and collapse together in a harrowing metonymic embrace. And yet, that same wrist and hand also bear an intact material object that will outlive its bearer: the gold ring. Similar to the necklaces, the heirloom swords, the rune-carved sword hilt made by giants, and the gold cup (the theft of which awakens the sleeping dragon whose fury will be Beowulf’s ultimate undoing), this ring sets up the possibility of story, of inscription, and of the renewal of violence in the urgency for revenge.”

Like the photograph, the poem of Beowulf “is a cultural response that, as testimony, overcomes the historical gap, its lostness and pastness, with a power to reconfigure our understanding of the present world and our present selves.” And it overcomes that gap, of course, through language, in the same way the photograph crosses over the space that separates the middle Eastern desert from our Western shores through the metonymy of the visual. We do not see the work of criticism as belatedly secondary to the poem, or to the photograph, or to any work of art (literary or otherwise), for as Edward Said writes, “rather than being defined by the silent past, commanded by it to speak in the present, criticism, no less than any text, is the present in the course of its articulation, its struggles for definition.” Ultimately, the job of the critic is similar to the job of the poet, who, in the words of Wallace Stevens, is always confronted, not with things as they are, but with things seeming, and both scholar and poet are “the artificer[s] of subjects still half night.”

Preface: Eileen A. Joy, "After Everything, The Postmodern Beowulf"

Nice work! Looks like it will be a valuable work, at the least, to keep on reserve for any grad seminar teaching Beowulf. It should also be a wonderful way for me to get deep into Beowulf when I'm compelled/given the opportunity to teach it.

Congratulations, Eileen, to you and to Mary. This looks terrific. I'll add it to the "conventional media" box.