Sors for the New Year 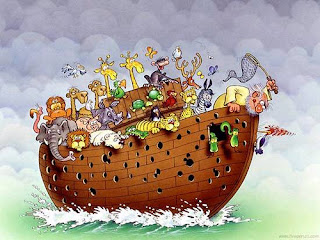 Inspired equally by Brian S. Lee on the Chaucer Listserv, who engaged in a bit of sortes Chauceriana, and JJC's post below on free will.

Here we have a promise of near complete destruction, or of a new beginning, or of the inability to make anything new (since the postdiluvian world recapitulates the antediluvian world): take your pick.

The idea of modernity is closely bound up with this principle that it is possible and necessary to break with tradition and to begin a new way of living and thinking. Today we can presume that this 'breaking' is, rather, a manner of forgetting or repressing the past. That's to say of repeating it. Not overcoming it.

The Flood is the suicide of the world, in the Zizekian sense; it's also a record of the impossibility of that act, to wit (with an assist from Luther Blissett):

From someone Slavoj picked up the knack
of killing himself through The Act
He traverses, emerges,
has the same set of urges,
And sweats like a monkey on smack.

My wish for you: may 2007 be better than it possibly can.

(* I wanted this to be "without complaint," but the Middle English Dictionary just isn't on my side here...)
Posted by Karl Steel at 11:15 AM