And your little horse, too 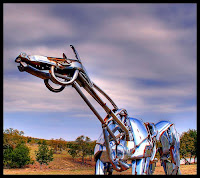 Having astonished myself by completing my to-do list before 10pm on two successive days, I've been going through the stacks on Specula by my bed. First impression: I've been pleased to have read several articles on cultural contact zones (Leor Halevi, Oct 2008, "Christian Impurity versus Economic Necessity: A Fifteenth-Century Fatwa on European Paper" and Karrin Kogman-Appel, January 2009, "Christianity, Idolatry, and the Question of Jewish Figural Painting in the Middle Ages"). But that's not why I'm writing today.

In the July 2008 issue, Katherine Allen Smith published "Saints in Shining Armor: Martial Asceticism and Masculine Models of Sanctity, ca. 1050-1250," which concerns a couple dozen male saints who, imitating or appropriating chivalric identities, afflicted their bodies by constantly wearing armor, which was often ill-fitting or excessively heavy to boot. The frequent references to their doing battle with the spirits of the air of course (anachronistically) reminds me of Guthlac, and the self-inflicted ordeals of Lawrence of Subiaco (described on 586) certainly calls for a more affective, poetic engagement than Smith would have been able to give it in the course of the article.

It's a footnote, however, that really struck me. She quotes (582 n40) from a cursing from the 1031 Council of Limoges, the record of which is often cited in discussions of the development of the Peace Movement (and thus a key place in the debate over the emergence of chivalry and of the milites as a class: this article strikes me as a good take on the subject; the PL ascribes the record of the council to Jordan of Limoges, but it's actually by Adamar of Chabannes: see, among other places, Little's Benedictine Maledictions 214).

The relevant words of the curse:

let them [the excommunicated knights] be cursed and their accomplices in evil [adjutores eorum in malum]: let their arms be cursed, and their horses [et caballi illorum]: they will be with the fratricide Cain, and with Judas the traitor, and with Dathan and Abiron, who entered hell while still living.

I love all of this, but I highlighted what especially concerns me. We are likely all familiar with the chivalric circuit, and, thinking about medieval and modern armored cavalry, and about lobster knights, I wrote in comments here about how the "elite status of this military profession derives precisely from its inhuman interpenetration of armored cavalry with warrior," so it makes sense to me that cursing a knight would mean also cursing his arms and horse. Simply cursing the man would be incomplete.

With my apologies for the minimal payoff: although the word "adjutores" frustrates deleuzoguattarian readings of the curse--the deleuzoguattarian circuit isn't one of dominant center AND accomplice--it still fascinates me. It's odd to me that the horse and armor should be in the same semantic and taxonomic register; and it's odd to me that they should be accomplices. With "adjutores," the curse seems to grant too much agency to armor and horse, while at the same time muddling the distinction between nonlife and life. A horse is like armor in that it's a necessity for a knight, but otherwise it's very much not like armor. What conception of the animal, I wonder, allows for the horse to be cursed in the same breath as armor? What conception of the animal allows the horse to be cursed, like armor, as an accomplice?

(image from here by twoblueday under a Creative Commons license)
Posted by Karl Steel at 8:26 AM

Karl, you might want to look at Erdmann's Origin of the Idea of Crusade too. It has some stuff (if I'm remembering correctly) on the blessings of arms & armor, along with the soldier. One or 2 might put the horse alongside the arms/ armor there too...

Matthew, thanks for the excellent recommendation. I'll definitely check it out when I decide I want to do more with this, but this is exactly the sort of I thing I want to see (especially because the footnote in Smith's article doesn't speak about blessing horses, and also because the Jean Flori article she directs me to is unavailable because of bad database management on the part of my school and because the book, which I presume is where the article ended up, is not available in its entirety on google books).

However, I found something wonderful in the course of my looking that deserves its own post.

Another idea that just came to me -- maybe there's something in Kantorowicz's Laudes regiae?

A more generic phrase than the English "knight" is "man at arms." While except for in English a "knight" is a "horseman" or a "rider."

Steve, I've often wondered why English is unique in that regard, but not so much that I've bothered to track it down. Now that I think of it, I also wonder why the Latin miles seems, to my limited knowledge, the preferred word for knight and not eques.

It's also interesting to me that the 'technology' featured in the name for this class is the other life, the horse, rather than the arms and armor, which, I imagine! (and I only imagine, since I haven't done the research on this), were by their cost and by the expertise required to make them, out of reach for anyone without money or power. I do vaguely recall that medieval Latin will refer to knights as 'swordsmen,' but the overall preference is to focus on the horse. Why?

And Matthew, thanks again for the bib suggestions: when I think about this stuff more deeply, I'll certainly try to track all this down.