For History or for the Moment? 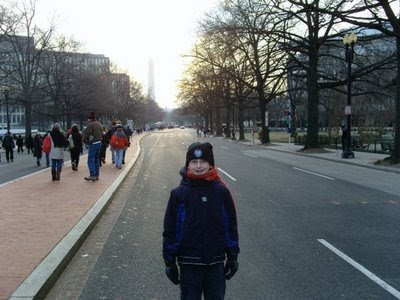 My son Alex and I went to the Inauguration on Tuesday. You can see some pictures I took here.

We froze various parts of our anatomy off, but loss of body seemed a small price for joining ourselves to a crowd so ebullient. For reasons of historical resonance (and because it provided a break against the frigid wind), we sat for much of the morning at the Lincoln Memorial. As the time for the oath of office neared, we wandered to a spot near the World War II Memorial, a good place to view the Jumbotrons. The crowd (I must admit) booed Bush, Cheney and Warren. The shocked silence that followed Justice Roberts' flubbing of the oath [note to John Roberts: write words on arm next time] was followed by a cheer so loud it still bangs against my eardrums.

Many commentators have concluded that Obama's inauguration address was not up to snuff, especially when compared to the soaring diction of his speech at the Sunday concert or his various rhetorical achievements during and even before the campaign -- or when compared to Lincoln. Obama has been faulted for crafting words that were too much of the moment rather than a speech that will live in history. He kept the now so foregrounded that the distant future (this line of reasoning runs) lost the gift he should have bequeathed.

It seems to me that for any words uttered by any speaker to escape their moment and live powerfully afterwards, they must be capable of time travel. These words must immediately transport their listener back into the moment of their utterance (a time of crisis, most likely, a time when the future is difficult to discern no matter how passionate the hope for a better time to come). They must also make that future possible, open that time to come to possibility, by acknowledging forcefully the power, the grip of the past. Sometimes they do this by rebuking that history, by clearing space for something better to arrive. Sometimes they do this by forcefully choosing our better history, leaving behind the the recriminations and worn out dogmas that have come to seem the truth.

You'll notice already some of Obama in those lines. Here are some more: We reject as false the choice between our safety and our ideals. Our security emanates from the justness of our cause, the force of our example, the tempering qualities of humility and restraint. Let it be said by our children's children that when we were tested we refused to let this journey end, that we did not turn back nor did we falter.

Those are good words. Those are strong words. They are of the moment, but they have a power that (I believe) will enable them to live long beyond the passing of our times. That's true timelessness: not a removal from history, but a temporality in which past, present, and possible futures coinhabit.

But, that's just my own of the moment opinion.
Posted by Jeffrey Cohen at 6:44 PM

Thanks so much for your post, Jeffrey. It's so, so delightful to know how you were able to share this moment with your son. What a treat. And in a weird way, the goofed oath is probably going to be one of the things that stays with me the most about the inauguration. And the fracturing of that oath is also a hugely powerful symbolic moment as well (putting aside the constitutional arguments that right-wing bloggers immediately summoned about the legitimacy of Obama's presidency).

So, here's this discursive moment in which *everybody* knew what was supposed to happen, what the words were supposed to be, and how it was supposed to go. Perhaps the most formal, ritualized 30 seconds in US political history. And it didn't happen! It didn't happen the way it was supposed to. The way we all knew it would, it must. We were (at least I was) *surprised.* Shocked even. (Is there anything in politics that shocks and surprises anymore?) Not only was it a moment of transport, a wormhole for time travel, but a vertiginous moment, a supremely human moment. Talk about a rupture in time, a moment of dislocation and temporal hybridity! I can only hope that the stutter-step of the oath, the break of/with tradition, a moment of surprise, becomes a hallmark of Obama's presidency in the best sense. I could probably riff on this for awhile but am already behind on two essays (sorry Eileen!).

a good and thoughtful response to the moment, one worth reading after all the other responses.

They booed Warren? I was expecting that, and I didn't hear it. The crowed near me booed Bush (of course), and Lieberman.

Anyway, you're right. Obama's speech was exactly what it needed to be. If he had given some flowery and abstract speech written purely for the history books (and composition textbooks), they would have blasted him for not talking about the moment ... you can't win in these situations.