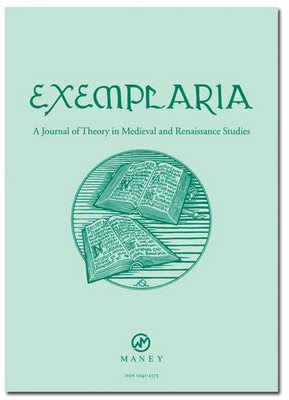 It's official: after twenty years, R. Allen Shoaf has retired as editor of Exemplaria. The journal was among the first high-profile venues for publishing theory-savvy medieval and early modern research. Honestly, I believe that Exemplaria is the major reason that medieval studies became so receptive to theory early on. The journal also paved the road along which book series like the New Middle Ages followed.

Recently the journal moved to Maney, which repackaged Exemplaria as a slimmed down and glossier periodical, rather like a science journal. Exemplaria is now published four times a year, which will no doubt alleviate its infamous backlog. With the new year comes the reign of its new editorial board:
The advisory board has also been completely changed: all have been sent notice that a new advisory board is being put into place, serving five year (rather than indefinite) terms. I've been on the board since 2001, so I am happy to give up my place to someone new. This infusion of fresh brains (horrible image) can only be a good thing ... so look for many changes to come at this journal.
Posted by Jeffrey Cohen at 8:16 AM