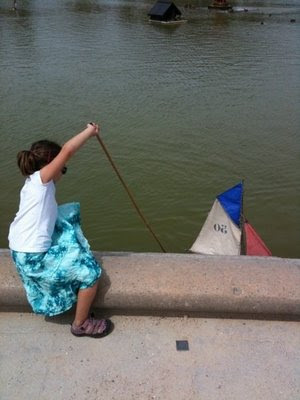 by J J Cohen
My family is well ensconced in our Parisian apartment, not far from the market and restaurants of the Rue Mouffetard. We've spent long days walking the city. Today after the Cluny, Jardin de Luxembourg, and Tour de France, the kids finally reached their breaking point ... so after an early dinner (6:30 PM -- two hours earlier than most anyone else around here would consider sitting down to dine), everyone except me is engrossed in watching Belleville Rendez-vous. I'm a fan of the film, but have seen it too many times, and the inane song they play throughout tends to get stuck in my head. I thought I'd compose a blog post instead.
The last time I was in Paris was 1994, when New Chaucer Society met at the Sorbonne. I had organized a panel on the material body in Chaucer, and remember that the Aranye Fradenburg's inspiring but somber meditation on the subject yielded a far less mirthful session than I had anticipated (and I love it when events do not follow their given plan). There were also some nasty and not well researched remarks about queer theory and Chaucer from a senior luminary that made the high regard I had held him in vanish. Good times, good times.
I love being in the city now with my family. Wendy does not speak French, but she throws herself into ordering food and negotiating social exchanges with aplomb: if Spanish or Italian comes out, so be it. Alex has a year of French under his belt, but has had a harder time gathering the courage to speak up and practice what he knows. Katherine meanwhile doesn't seem to need any language skills at all to charm and bend to her will. Her smile and her good humor are enough to make the gruffest Parisians do unexpected things. Today, for example, the owner of the café where we were having an afternoon drink scooped her up and brought her behind the bar to show her the cash register, the washing machines, the workings of the restaurant that most people don't get to see.
A few other memories of the trip so far:
Posted by Jeffrey Cohen at 2:57 PM