Alexander Penetrated and Undone: Queer Orientations in the Old English "Letter of Alexander to Aristotle" 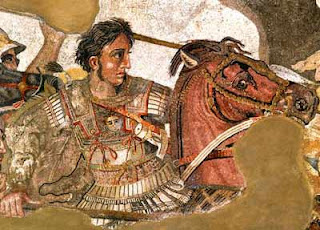 As indicated in an earlier post, I still owe ITM readers a second installment on my impressions of and reflections upon the seminar on the life-work of Leo Bersani, "Reading Leo Bersani: A Retrospective," organized by Th(e)eories: Critical Theory and Sexuality Studies, and that really is coming [for real; no more lies], but in the meantime I want to share with everyone here my paper from the International Medieval Congress [University of Leeds; 13-16 July 2009], "Alexander Penetrated and Undone: Queer Orientations in the Old English Letter of Alexander to Aristotle," which, in many respects, was heavily influenced by the time I spent at University College Dublin just a few weeks before with Leo Bersani and queer company. Please forgive its somewhat pell-mell nature/organization, as it represents my first stab at this text, which I might remind everyone is contained in the British Library, Vitellius A.xv manuscript, Nowell codex, where it is situated with five other texts: a fragmentary life of St. Christopher, the Wonders of the East, Beowulf, and Judith. I do not think the placement of this text alongside Beowulf is at all capricious or accidental, and would even go so far as to argue that there is a connection, via this text, between Beowulf and his Geats and the Scythians of Herodotus's Histories, but I leave that more full argument for another day. Herewith, the paper, as read at Leeds, with just a few emendations:

Alexander Penetrated and Undone: Queer Orientations in the Old English Letter of Alexander to Aristotle
Posted by Eileen Joy at 6:51 PM

Eileen, I really enjoyed reading this essay when I saw it posted on Facebook, and I'll comment briefly now.

Thank you for this exploration of what makes the Letter so haunting, so compelling. You've made me think of two things: the first is that I now really want to think of the Letter together with Mary of Egypt. The Berlant and Warner sentence you quote, the one about "a space of entrances and exits, unsystematized lines of acquaintance, projecting horizons, typifying examples, alternate routes, blockages, [and] incommensurate geographies," works, I think, beautifully to describe the wanderings and meanderings of the Egyptian desert. (I have more to say about rivers too, but I should probably just write it up.)

The other place where I think we connect is that some OE/A-S texts seem to me to be specifically composed to create desire, and most especially the desire to know. The Letter does that brilliantly -- we learn to be curious and restless from him. I'm interested in the ways that texts can actually train their readers to feel certain emotions and desires. Or, if you prefer a less military word, I'm interested in how a text can make its reader feel a loss, a lack that must be filled.

I look forward to having more than five minutes on the internet so that I can write something substantial, but I am out of the country for another two weeks so that will take a while. Meantime, let me state how much I enjoyed the piece at Leeds, with its provocative reading of Alexander and its meditation on what it means to be opened by the world.

We spent the day in Pompeii, where one can see a recreation of Roman mosaic that features the conqueror. Of all the many possible figures for the centuries to love, he ranks among the most enduring: how strange is it that Alexander is a name found in so many languages? Alexander really travels, propelled forward by (transhistorical?) desires.

Irina: sorry for the delay in replying here, but I was in Wash, DC visiting my parents just after the Leeds Congress and let's just say they still have rotary-dial phones in their house and blogging, Facebooking, and whatever-onlining is not an option at their house. Your comments are somewhat uncanny because just after my session Clare Lees [who was the moderator] mentioned that I should look at Mary of Egypt in relation to the Alexander text, for much the same reasoning you cite here. [Clare and Diane Watt, by the way, have quite an interesting collaborative project on the OE Mary of Egypt underway, having to do with the desert as a trans-gender/queer space.

Also, as to how the "Letter" trains us to read a certain way, this is precisely one of the points I raised--more than once--when I was attending the 2nd international workshop of the Anglo-Saxon Studies Colloquium ["Anglo-Saxon Futures: About Time"] at King's College London in May 2008, in relation to papers [more than one] given on the OE Mary of Egypt, and it is also something I have been thinking about a LOT relative to the "Wonders" and "Alexander" texts in the Nowell codex.

Eileen, I am [ahem] tempted to say something about great minds...

Seriously, though, this is something I'd love to discuss in person at greater length (perhaps over that martini at SEMA?). I have this theory slowly building in my head about texts with -- I'll just put it this way -- special powers. And Mary of Egypt continues to be a text of deep fascination for me. There are also some interesting things going on with changes in the OE translation (pace Mary Kate!) that add to the shifting qualities of the space.

Irina: let's definitely discuss this further at SEMA because I think the issue of how these texts may have been [subversively] read, and in line with what the texts themselves are doing [somewhat outside of what are conventionally accepted notions of how Anglo-Saxon persons supposedly read these texts, which, let's face it, are *strange*/e-stranged] is a much-neglected subject in the existing scholarship. Perhaps a co-authored article at some point? I raise the possibility--hint at it--in the chapter on the OE "Wonders of the East" and the massacre in Gujarat, India in Jeffrey's Palgrave book, "Cultural Diversity in the British Middle Ages."

Eileen, I'm looking forward to the conversation. In the meantime, I'll do my homework and read that article!