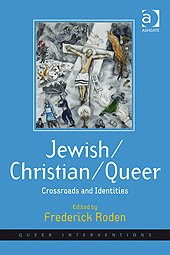 investigates three forms of queerness; the rhetorical, theological and the discursive dissonance at the meeting points between Christianity and Judaism; the crossroads of the religious and the homosexual; and the intersections of these two forms of queerness, namely where the religiously queer of Jewish and Christian speech intersects with the sexually queer of religiously identified homosexual discourse.

If you follow the link above, you may browse the table of contents and download Roden's excellent introduction. MOR was kind enough to send me a copy of the "Series's Editors Preface." "Cross-Identifications" is short but quite rich, with observations like this, about openness and neighboring:

What Jewish/Christian/Queer shows us is that the deconstruction of seemingly mutually exclusive identities need not necessarily be a violent operation. Rather, it can make generous and generative space for a kind of openness, to others, to alterity, to racial, gendered, sexual and religious difference. If the Jew, the Christian, and the queer can be shown to neighbour each other, as each of the essays which follows demonstrates, then we can begin to foster ways in which it is possible, in the current politico-historical conjuncture, to love one’s neighbour. The very ethical stakes of the encounter the title of this collection stages hinge upon nothing less.

Cross-identification can foster a "non-assimilating openness to alterity." But the move is not without risks: "Such critical and identificatory porosity is a huge risk, of course, because it gives up on what seem like hard-won identities in favour of impure, mongrel, hybridised identity positions." Following Jean-Luc Nancy, O'Rourke and Giffney call this process dis-enclosing: an "opening up, a blossoming."

I want to quote the ending paragraph of the Preface because it captures eloquently how neighboring might be thought in terms larger than those of mere spatial adjacency. In my current research I have been exploring how the region between Christian and Jew can become in the Middle Ages a space (however volatile, however fragile) of interchange and mutual transformation, a place where heteropraxis undermines orthodoxy. O'Rourke and Giffney write of the necessity of such spaces for neighboring today:

For both Judaism and Christianity the commandment in Leviticus 19:18 to ‘love your neighbour as yourself’ is canonical and an ethico-moral imperative. Alain Badiou has reworked the question of the neighbour in terms of what he calls ‘neighbourhood’. As Kenneth Reinhard explains it ‘rather than a definition based on topological nearness or shared points of identification, Badiou describes neighbouring in terms of “openness”. A neighbourhood is an open area in a world: a place, subset, or element where there is no boundary, no difference, between the inside of the thing and the thing itself’. For Badiou we choose, we decide, for the sake of universality, to construct a common open area, a ‘new place of universality’. This forcing open, this love, is ‘the decision to create a new open set, to knot two interiorities into a new logic of world, a new neighbourhood’. Roden’s knotting of the Jew, the Christian, and the queer creates an even more expansive open set and for Reinhard ‘an unlimited number of open sets can be united without being closed or totalized. Hence, the neighbourhood opens on infinity, endlessly linking new elements in new subsets according to new decisions and fidelities’. Jewish/Christian/Queer’s refusal to solidify identities, to promiscuously mix disciplines, theories, positions, is a subjective act in the Badiouian sense, a decision to create a new logic of world, one which has never been so urgent as today.

Posted by Jeffrey Cohen at 8:52 AM