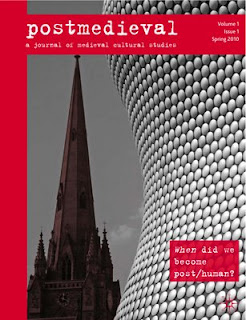 EDIT Thursday, 7/2: I have replaced image at left with the "real" final cover, and this is a much higher-resolution image than the previous one [so click on it and check it out!]. Again: thanks so much to everyone who helped with this.

Thanks to everyone who helped us with the cover designs for postmedieval: a journal of medieval cultural studies, we are now edging closer to the design for volume 1 [issue nos. 1-3]; the overall template will stay the same but different images will be dropped in for the separate volumes [possibly for each issue--haven't quite decided that yet]. But in any case, click on the image on the right to see the fullest possible resolution of the image. We want to give special notes of gratitude to Karl Steel and Anne Clark Bartlett [suggested making the cathedral or sky pink], Anna Klosowska [suggested the punk, bleeding, unevenly-edged manual typewriter font], Christina Fitzgerald [warned us against designs that screamed clove cigarette-smoking graphic design students who are too cool for themselves], Michael O'Rourke [suggested, via Reza Negarestani, a pink that comes "after red," and via Kristen Alvanson, simply urged deep, rich pinks upon us with these words of Alvanson: "Pink magnolias, NYPL, NYBG, cherry blossoms in DC more pink...a fleshed out nipple, a bleeding heart, little girls' pink velvet ribbons, pink spaces, pink lights, my entryway and upstairs foyer bright pink glaze, a pink cashmere sweater set, Christos' pink, pink blush, or the lack of need for blush cotton candy Pink poodles or pink cats pink cover... Read More of Laches the most perfect shade of pink lipstick pink cd holders pink pearl necklace pink pearl earrings pink camisole pink highlighter pink Christmas lights and pink flowers- peonies, tulips, Christmas Cactus in bloom in my room, pinkish lilac, pink hydrangea, pink rose of sharons, rare pink poppies, carpet roses, spinning in pink flowers...begonia, spider flowers, cosmos, sweet peas, toadflax, moonwort, petunias, phlox!, butterfly flower, sun moss, wax pink, lilies, caprifloiaceae, pink wisteria, malvaceae, oyster plant in pink, foxglove, caryophyllaceae, heather, theaceae, magnolias, chinese crab apple flash by my eyes, Pink torrent"], Martee Edwards Davis [not a medievalist but a friend from elementary and junior high school who has experience in graphic design; suggested we put our thematic question on the cover and to also go for an edgier pink/red], and finally, Liza Blake [suggested that the pink used to color in cathedral or sky be a lighter shade of border color]. And if I missed anyone: my apologies!

One thing left to do will be to smudge out the tiny bit of another building that you can see poking out behind the modern Selfridges building in Birmingham. I will note here, because I didn't before, that the location of this photograph is of great symbolic importance in relation to the journal's vision and mission. The reason is that, first, Birmingham, as I'm sure everyone already knows, is where cultural studies was first founded as an academic discipline in 1964 when Richard Hoggart, Stuart Hall, and others helped to found and direct the Centre for Contemporary Cultural Studies at the University of Birmingham. Second, the skyline of downtown Birmingham, from many angles, includes striking contrasts between the past and the present, the gothic and the sleekly modern, the feudal and the industrial. Third, because the Selfridges building was designed by Future Systems, who described the exterior design scheme this way:

The skin is made up of thousands of aluminium discs, creating a fine, lustrous grain like the scales of a snake or the sequins of a Paco Rabanne dress. In sunlight it shimmers, reflecting minute changes in weather conditions and taking on the colours, light and shapes of people and things passing by - an animate and breathing form.

Id est: the human and the machine and the animal combined. And finally, because the cathedral spire you see in this photo belongs to St Martins, a church in downtown Birmingham that has a rich, multi-layered architectural history, we could not think of a more appropriate architectural "site" for a journal that wants to emphasize inter- and post- and "middle" temporalities. Here is how the photographer, who goes by "richardr" on flickr. com, describes the church's building history:

St Martin’s is the ancient parish church of Birmingham and historically it is the Mother Church of Birmingham. It is generally considered that a church was built on this site in the mid 12th century. In the 13th century a large sandstone church was built which was only about fifty feet shorter than the present building. It had a central nave and two aisles with three altars at the East end and a tower. The spire was built a few years later. By 1690 the stonework was crumbling and the whole church was consequently encased in red brick, with the exception of the spire. Various attempts were made to restore the church but the most successful was 1873-75 under the direction of J. A. Chatwin, who had been one of Pugin’s assistants in the building of the Houses of Parliament. His plan was to retain the recently restored tower and spire and build onto them a new church, with north and south transepts, in the Gothic tradition. The interior is faced with red sandstone from Codsall Quarry, the exterior of the building being of Derbyshire and Grimshall stone.

In 1950, during Canon Bryan Green’s rectorship, in order to rectify bomb damage sustained in World War II, a significant restoration scheme was implemented under the supervision of Philip B. Chatwin, son of the architect who built the 19th century church. The chapel of the ancient Guild of the Holy Cross was restored. The building has some outstanding features including a unique stained glass window by William Morris designed by Edward Burne-Jones in 1877, their first in Birmingham, and a magnificent hammer-beam roof weighing 93 tons, which is believed to be modelled on the medieval Westminster Hall.

And one last thing: when everyone gets "back to school" in August, please tell your university or college library that you simply can't live--indeed, will throw yourself down on the ground and cry and scream--if they don't purchase a subscription to postmedieval. More information on how to make that happen can be found here. [I might also point out that a special discount will be offered to all members of the BABEL Working Group, so if you haven't gotten around to joining BABEL, why not do so now by sending an email to me at ejoy@siue.edu?] 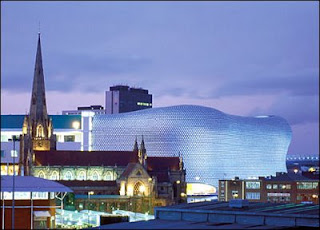 When I saw this image a few weeks back, I was hoping that it would be the cover finalist. Glad to see that my wish has come true. Looks great!

When I saw this image, I looked here to find what we would all be wearing to the launch.

Be afraid, medievalists. Be very afraid.

I don't know, I think you could pull that off, Stephanie. I at least dare you to try.

Congratulations on the cover, Eileen. I love that the artwork's relation to the contents was taken so seriously, and enabled such a communal effort.

The only redeeming thing about that dare, Jeffrey, is that all eyes would be on this beautiful cover. It looks both sleek and tactile; and the template seems very inviting to other images, too. Congratulations to all.

Sorry, I haven't been following the evolution, but that is a gorgeous design.