[my images; click to enlarge]
by J J Cohen

A slow walk across t 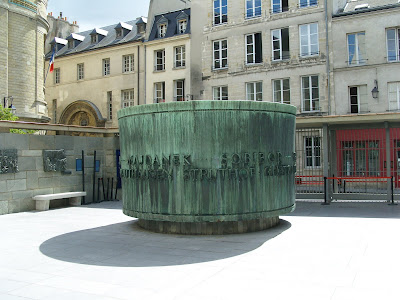 he Pont de la Tournelle, boats full of tourists gliding with colors below. A pause on l'Ile Saint-Louis for ice cream: deep red of cassis, burnt caramel almond, flecked white of true vanilla, deepest chocolate for ardent Katherine. The morning was too early for such indulgence. The man at the café who placed red and brown and white on cones rebuked us with his silence, but we didn't care. We ate our treat and passed along the Pont Marie, stranded sand of the Paris plages beneath, onward to the Marais.

The Mémorial de la Shoah, the sad business of the day. We'd decided back in Washington that we would visit the Mémorial du Martyr Juif Inconnu during our Paris peregrinations. Now that we were approaching the site we were hesitating with our lingering on bridges and our morning ice cream. A monument to six million dead. The courtyard is lined with walls in which are cut the names of those deported from Paris. Eleven thousand of the 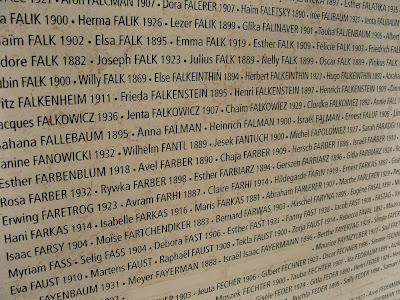 We hesitated to enter that courtyard. A bullet proof wall, translucent but still brutal, separated us from the memorial. We could see the cylinder with the camps emblazoned. STRUTHOF. AUSCHWITZ. MAJDANEK. We could see the steep walls with their names we did not want to read. We knew already how familiar some would be: Cohen, Alpert, Weitzman, Farber, Laufer. A brief litany of shared ancestry. Not our family, not our family ... and yet familiar names, intimate strangers. Dead for bearing our names. Why would we bring our children to such a place? Would they be able to measure the loss? Would they imagine themselves as wall-carved names?

We almost turned back. The guard saw us loitering and buzzed the door unlocked. He looked through our camera bag, our backpack. He smiled at the chocolate cookies for Katherine, the stuffed dog she carries as comfort. Then we were inside. Cohen, Alpert, Weitzman, Farber, Laufer. Easy to read, under every year of the war. Eleven thousand of those deported were 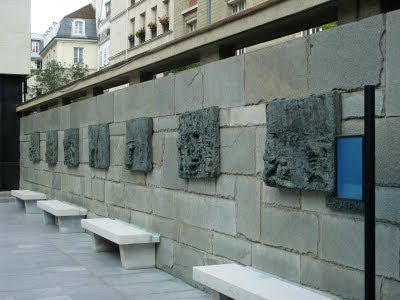 children. I looked at Alex and Katherine. A veteran of the Holocaust Museum in DC, the tears were already in Alex's eyes. Katherine, though, was smiling. She liked the flowers that someone had left, the small piles of memorial pebbles, the burned out yahrzeit, the little Russian doll crumbled in a corner.

We looked at the cylinder with its encircling camps. We looked at the mounted plaques with their stone images of despair. We entered the main building. What you are about to see is quite intense, the woman warned us in French and then again -- for emphasis -- in English. I'll watch your daughter for you if you like. Should we? I looked at Alex, and he looked down at the floor. Wendy spoke for him: No.

We left. In the courtyard, by the cylinder with all those camps, by the names and the doll and the ruined candle, Katherine began to spin. As we lost ourselves to history, she lost herself in whirling, faster, and faster. She laughed at a private joke, the sobriety of the place was lost to her. I took my camera from 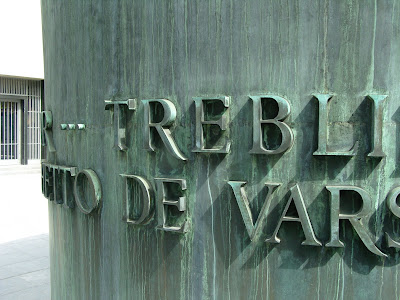 its bag and grabbed images of everything, as if this were the last day we could have here: the memorial, the plaques, the building, the names, the girl lost in a dance of her own devising. We left, at last.

Later that evening I said my good night to Alex. He called me back to him as I closed his door. He gave me the Serious Look. "I'm sorry," he said,"for today. I'm sorry for the opportunity I made us miss. We didn't go to the exhibit because of me."

My heart makes a sound that I cannot replicate when the sadness of my children breaks it. I could feel the fissure begin. "No." I said that word as firmly as I could. I was not going to allow him that sadness, that regret. Katherine taught me something and I needed to speak it. "That's not what happened at all." Instead of spending much time at the Mémorial de la Shoah, we had crossed the Marais to see the Musée d'art et d’histoire du Judaïsme, where we'd witnessed some sad things (the shattered remains of medieval Jewish tombstones, whole lives readable from the fragments of Hebrew inscribed in their ruins). But we spent most of our time with a series of small posters spread throughout the museum, each of which bore a picture of a person now living and a paragraph or two in his or her own words about what it means to be a Jew. For many, Jewishness meant nothing: it was more important to be French, or expat Algerian, or a hybrid of cultures, or to hold a fragmented identity. For others Jewishness was all, an anchor in a tumult. For every pe 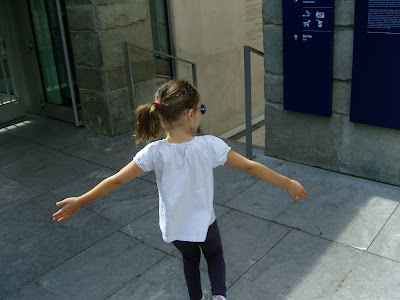 rson, though, Jewishness meant something very different. No eternal verities, only lived complexities. Accommodation to a difficult world. Reinvention. Sometimes rejection. Much history. But always life. Alex's fascination with these plaques is what brought us through the entirety of the museum's collection. No opportunity had been lost, I asured him. The Shoah is not going anywhere, even if Jewishness -- even if humanness itself -- is always on the move.

Posted by Jeffrey Cohen at 2:56 PM

Beautiful work, Jeffrey, and my heart goes out to Alex. Thanks for this.

Thanks for this beautiful and moving post. And perhaps--just perhaps--the Shoah itself is always on the move, both in the past and present simultaneously, alive still somehow and transformed and still lived across all of the flickering consciousnesses of those who were there and will never remember it in the same way. Until, to cadge from Toni Morrison, enough time passes that the weather takes over and it is only weather.

I also felt this was a story about time, and — thinking more about the family dynamics here — about how your kids both expressed a confidence in their futures: there would be time, later on, to go in, to be serious, to return to Paris. There is a time for dancing, too, and it's often when you are five years old. There is a time to pay respect to the enormity of horror, and sometimes that is by refusing to watch, or witness. I speak as an outsider to Jewish history, but I would have thought it reasonable for a kid to take his own time to re-visit that history.

Poignant and beautiful and intensely Jewish. In the midst of our sorrow, yet still we dance.