Quote of the Day: Manuel De Landa on the Biogeological 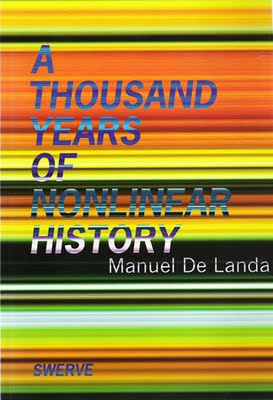 From Manuel De Landa's magnificent A Thousand Years of Nonlinear History, a narration of the possibilities enabled via organic-mineral alliance:


"In the organic world ... soft tissue (gels and aerosols, muscle and nerve) reigned supreme until 500 million years ago. At that point, some of the conglomerations of fleshy matter-energy that made up life underwent a sudden mineralization, and a new material for constructing living creatures emerged: bone. It is almost as if the mineral world that had served as a substratum for the emergence of biological creatures was reasserting itself, confirming that geology, far from having been left behind at a primitive stage of the earth’s evolution, fully coexisted with the soft, gelatinous newcomers Primitive bone, a stiff, calcified central rod that would later become the vertebral column, made new forms of movement possible among animals, freeing them from many constraints and literally setting them in motion to conquer every available niche in the air, in water, and on land. And yet, while bone allowed the complexification of the animal phylum to which we, as vertebrates, belong, it never forgot its mineral origins: it is the living material that most easily petrifies, that most readily crosses the threshold back into the world of rocks. For that reason, much of the geological record is written with fossil bone. The human endoskeleton was one of the many products of that ancient mineralization. Yet that is not the only geological infiltration that the human species has undergone. About eight thousand years ago, human populations began mineralizing again when they developed an urban exoskeleton: bricks of sundried clay became building materials for their homes, which in turn surrounded and were surrounded by stone monuments and defensive walls. This exoskeleton served a purpose similar to its internal counterpart: to control the movement of human flesh in and out of a town’s walls. The urban exoskeleton also regulated the movement of many other things: luxury objects, news, and food…Thus, the urban infrastructure may be said to perform, for tightly packed populations of humans, the same function of motion control that our bones do in relation to our fleshy parts. And, in both cases, adding minerals to the mix resulted in a fantastic combinatorial explosion.” (24-6)

Posted by Jeffrey Cohen at 7:10 AM

Lest De Landa's project here be misunderstood, it's worth noting that he doesn't make the comparison an equivalence: "We must avoid the error of comparing cities to organisms, especially when the metaphor is meant to imply (as it has in the past) that both exist in a state of internal equilibrium, or homeostasis. Rather, urban centers and living creatures must be seen as different dynamical systems operating fra from equilibrium, that is, traversed by more or less intense flows of matter-energy that provoke their unique metamorphoses."

Awesome verification word for a nerd like me: "orkers".

You're right. I should not be reading posts and commenting without taking a step back to get the big picture.

Twelve days before, five minutes later. I just read the quotation from DeLanda's book... And felt ridiculous. Sorry about that.

...But the book as designed by Bruce Mau and Co. is a work of art in itself, too, isn't it?