Mandeville, Tolerance, Circumnavigation and the Jews 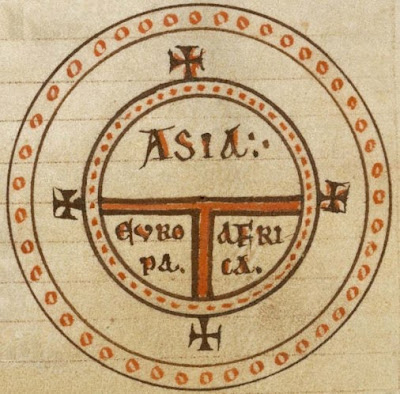 In that recent issue of PMLA about which I raved, Karma Lochrie has a provocative essay on "Provincializing Medieval Europe: Mandeville's Cosmopolitan Utopia." Lochrie renders the Mandeville-author an early version of Dipesh Chakrabarty. "Mandeville's paean to difference," she writes, "is more than an expression of tolerance: it is an insistence upon the provincialism of European knowledge, Christianity, and cultural achievement. In this insistence lies the utopian possibility of his cosmopolitan ethos" (596). Lochrie's Mandeville is quite different from the Foucaultian, knowledge-organizing version of the author in Geraldine Heng's tightly argued Empire of Magic, and has far more guiding personality than the textual-effect he becomes in Iain Higgin's Writing East.

As the keywords "cosmopolitan" and "utopia" suggest, though, there isn't much room within such a project for moments when Mandeville's forbearance falters. Lochrie acknowledges Mandeville's three infamous moments of anti-Judaism: his breezy attribution of deicide to the Jews for their role in crucifying Jesus (including their attempt to hide the cross); his narration of an episode in which the Jews attempt to murder all Christians via a poison found in Borneo; and his story of the lost tribes of Israel, Gog and Magog, enclosed in the Caspians and awaiting liberation so that they can destroy Christendom. These are uncomfortable episodes, and no amount of explaining can really diminish Mandeville's charges. Lochrie handles the three episodes by pointing out that Mandeville's anti-Judaism is not unrelenting, and that one version of Mandeville's Travels grants Jews and Christians a common descent through Japheth. That's not enough (as she admits) to obviate the Christ-killing and enduring threat against Christendom, but she writes:

I find myself attracted to this view, and keep thinking back to the moment when Mandeville narrates how a traveler almost circumnavigates the world. This is what I've written about that scene before:

Having passed through India and the five thousand isles that lie beyond its shores, he arrives at an island where “he herde his owen speech” in the words of men driving cattle. The traveler takes the language to be a marvel rather than a marker of return. Mandeville, however, insists that the man had come so far in his journey that he had arrived “into his owen marches” –England’s borders, the edge of that known world abandoned so long ago. Finding no transportation forward, the traveler “turned agayn as he com, and so he hadde a gret travayl.” After having finally arrived home and (apparently) too restless to long remain, the man sails to Norway. Storm-driven to an island in the North Sea, he encounters an eerily familiar scene:

And when he was ther, hym thoughte that hit was the yle the which he hadde y-be on byfore, where he hurde speke his owen speche as the men drof beestys. And that myght ryght wel be. (67)

A man circles the world to meet a place intimate and strange at once, to meet in a way his own past, his own self, but from an unanticipated perspective.

The story-teller who is a failed circumambulist stays forever in motion, and in so doing nearly arrives at his own point of departure, almost has the chance to see his own receding back, almost can view his world from an unexpected perspective. In the moment, he fails at that recognition. He does not see the gift he has received, that the point of view belonging to the world's hither side is suddenly his own. He turns back, he revoyages the wide world needlessly, not knowing that what he witnessed as other was himself. Only retrospectively, when the knowledge is almost lost, does he realize that the geography upon which he once stood -- upon which he has perhaps always stood -- is equally alien and intimate.

You could argue (and I think Lochrie does argue) that John Mandeville fails a similar test of recognition. He possesses the chance to view from the hither side the shape of his own identity, to see that it is built in part from anti-Judaism (a component perhaps of his real or invented Englishness). A potential cosmopolitanism that extends so far it encircles the world is a one of the few possibilities from which he averts his eyes, turns his back, returns to a journey that will bring him on a familiar but useless route to the Saint Albans in which he was born, and where he will write the ending of his travels, and die.

[edited late in the day to remove an incoherent sentence]
Posted by Jeffrey Cohen at 8:46 AM

I cannot think of any utopian communities (imagined or practised) that were cosmopolitan until you get to Bloch and Marcuse: before them most forms of utopianism were the opposite of cosmopolitan (selective, self-defining, self-reproducing) and had to be in order to sustain their utopian vision.

So I'm not comfortable with seeing Mandeville as both utopian and cosmopolitan - although with a different and more early-modern understanding of 'utopian' you could do more with with his anti-judaism.

The one counterargument I can think of is the nostalgic dream of the Golden Age (Hesiod --> Ovid --> Boethius), but when it becomes located in the present rather than the past (in the Alexander romance, where Alexander discovers the Brahmins, who reject him and his mode of life), this Utopia becomes as selective, self-definitive, and self-reproducing as any monastery or desert hermitage. This leads ultimately, I think, the the mockery of the Golden Age in Chaucer's 'Former Age' (and I think in a lyric by Deschamps whose name I don't recall).

I have to say, this:

And when he was ther, hym thoughte that hit was the yle the which he hadde y-be on byfore, where he hurde speke his owen speche as the men drof beestys. And that myght ryght wel be.

just took my breath away. What wonderful prose; I can't get that last sentence out of my head.

Unless by cosmopolitan, you really do mean associated with 'cities,' in which case, I also can't think of any.

Karl - I just wanted to say thank you for replying to my comment here. I commented because the previous post - with its link to Shire of Bend - reminded me how I used to try to make more serious comments here - and so I tried again. Then a collapse of my broadband, followed by absence from internet made it impossible to follow up.

Anyway - even now - I have to rush off somewhere else - I am failing to find the time for serious comment here. I did 'forget' the golden age tradition (a major ommission) mainly because i think of utopias as present-minded rather than fantasy projects. There is much to be said on relationship between the two of course. On cosmopolitan (Derek Keene's plenary lecture at recent AA would be helpful here on its cityness), but I was thinking of its easy pc-ness today - and
wondering what Karma Lochrie really meant by it. Clearly I will have to read the article!!

(Reminded me of the old sketch by Cleese, Barker and Corbett on class - but now cosmopolitaness has replaced class - I am more cosmo than her ..etc)

And look how the blog has grown in my short absence!!