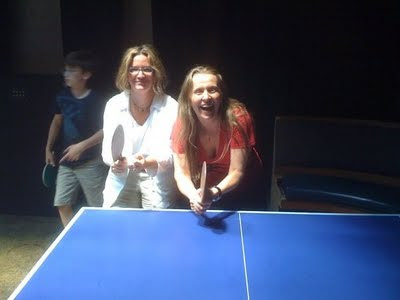 [illustration: well at least someone thinks Eileen is funny]
by J J Cohen

Yesterday the Cohen family met Eileen, Anna K. and her daughter, and Eileen's sister's partner and their triple progeny at Comet Ping Pong. I love this pizza restaurant/bar/ping pong parlor because ... well, where else do you find all three of those together?

As the list of attendees demonstrates, many present were in the age range of 5-12 (and all present acted as if they belonged within this range).

I note the presence of innocent minors because I want to record here publicly that:
I blog all of these facts because when the day arrives when one of the children in attendance is arrested for murdering a stranger using a citrus fruit, or for putting an eye out with an errant ping pong ball, or for causing a riot on the DC Metro by strewing stale pizza remnants, I want the world to know who is to blame.
Posted by Jeffrey Cohen at 10:18 AM

I want to point out here that letting a lemon rind harden until it could be used as a shank was Wendy Cohen's idea [Jeffrey's WIFE--please note: not a CHILD], and that, at first, she kept saying "lemon shunt," and then realized, "no, SHANK." Well, so much for Wendy's street cred.