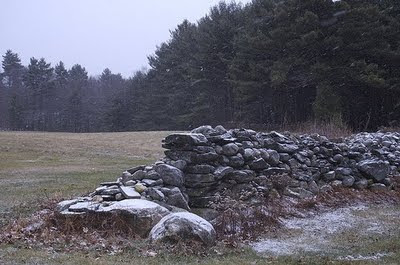 So I'm working on a piece for the inaugural issue of this little journal. Having spent a year and more composing a careful argument about Jewish-Christian neighboring in the English Middle Ages -- a project that is in some ways heavily reliant upon theory and philosophy, but that keeps much of this frame in the background, and so seems a little old fashioned (though I love it for that) -- anyway, being a little weary of the scholarly voice that I use, for example, when I write a Speculum essay, I am trying something different in this piece, a more experimental mode. Not that such experiments in voice are exactly new in my work, but this one so far takes it farther. The first issue of Postmedieval is devoted to the post-human, and that topic seems to me not well addressed without playing somewhat with the most fundamentally human of our tools, language.

Maybe I go too far? I am worried about sounding arch or stilted rather than engaging and creative. The worst result would be to render the piece unreadable or uninviting. Let me know what you think: this is how the essay begins.

What could be less geologic than itinerant, adaptive humanity?

The cultural truth of the mineralogical: nothing could be less expressive, less unyielding and unchanging, less taciturn or unfeeling, less fundamental than stone. Stone gives terra its firmness, mundane reality its comforting solidity. Stone is immobile. At those rare times when it slides or shakes or melts, what surprises us most is that something so inert can for a moment become kinetic. This movement is always brief, always the forgettable exception. Houses rise swiftly after an earthquake’s leveling, grass and trees effloresce after the lava flow expands the contours of an island, landslides bury troves that bulldozers can with exertion retrieve. Stone’s movements are its aberrations, not its nature.

Or so it seems to us, we whose lives are so short that were the stone we walk and build upon sentient, our presence would register nothing, we mayflies who live and perish in less than a blink. Small things who think our ephemeral walking and building expansive, who measure the world as if it were likewise swift and small. Small things who dwell in a large and rocky world. If stone could speak, what would it say about us?

Stone would call you transient, sporadic. The mayflies analogy was bruising to you, but apt. Stone was here from near the beginning, from the time when the restless gases of the earth decided they did not want to spend their days in swirling chaos, in couplings without lengthy comminglings, and settled into solid forms. Dolomite knows that story. Early organic things clung to stone’s solidity. It is harder than you suppose to tell the difference between nanobacteria and late animals, between starfish and human forms. They adhere, they multiply, they move. Yes, humans have always loved the permanence of stone, beholding in its endurance a thing they wish for in themselves. They scratch a small hole and bury their dead, they place rocks upon the bodies as if to keep the spinning world still. Organic life can hold perdurability only if the bacterial and the mammalian are one: then stone can see you. And it is from this vantage, this vantage so anthropodiscentered that language almost fails its imagining, it is from this lapidary point of view that stone can be seen to possess a life of its own.

A protean substance that retains no form in permanence, stone moves. Stone creates: architectures, novelities, art. Lava is the truth of stone, not a rocky aberration. All stone is in motion. Yet the humming bird pulse of human time is too rapid for geologic mobility to be seen. You expect stone to be heavy, but stone is light. If stone had a voice it would be less ponderous than your own. If you lived more slowly, if your hurried heartbeat did not limit the rhythm of your discerning, did not bind you to your swift smallness, you would know that you and stone are both human, or both stone.
Posted by Jeffrey Cohen at 2:30 PM

If you have some way to, please read:

You (or others) will not regret the time taken. It is one of the best contemporary essays I have read, and it is on the expressiveness of stones. Amazing.

Thanks for that lead, kvond! I am a big fan of Caillois so I look forward to reading this.

Late, I guess, but better than never (as they say): I am deeply interested in stone-story reflection (stone-as-media, stone-as-storyteller, stone talking as in archaeological ventriloquism).

And your post -(thank you) helps me thinking further on that to-be-a-discussion-subject.

I'd recommend the second part of "Thousand years of non-linear history" by Manuel DeLanda Swerve 2003(it is about magmas and lavas); but I believe you are all familiar with it...