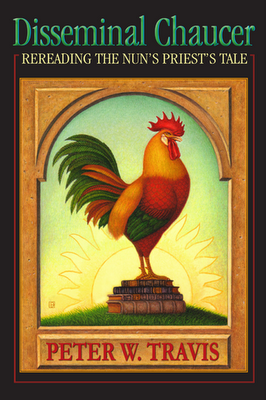 Isn't that a great cover?

I was asked to blurb Peter Travis's new book, coming out in November from the University of Notre Dame Press. I did so happily, and was thereby able to peruse an advance copy. ITM readers will want to purchase the volume when it appears: it is readable, rigorous, and entertaining.

Some version of this praise from me will appear on its back cover:

Peter Travis opens the Pandora's box that is Chaucer's "Nun's Priest's Tale" by asking a disarmingly simple question about its genre. He proceeds to detail, brilliantly, the narrative's status as a multiplex parody, a medieval Ulysses. By refusing to reduce the tale to a singular meaning, and by maintaining that its proliferative ardors are part of its formal structure, Travis provides a tour de force analysis not only of the work, but of Chaucer's ambitions throughout the Canterbury Tales. Lucid, engaging, and great fun to read, Dissemimal Chaucer provides a compelling model for doing theory-savvy work that is scrupulously attentive to medieval textuality.

And here is the official press copy, from the UND website:

Chaucer’s The Nun’s Priest’s Tale is one of the most popular of The Canterbury Tales. It is only 646 lines long, yet it contains elements of a beast fable, an exemplum, a satire, and other genres. There have been countless attempts to articulate the “real” meaning of the tale, but it has confounded the critics. Peter Travis contends that part of the fun and part of the frustration of trying to interpret the tale has to do with Chaucer’s use of the tale to demonstrate the resistance of all literature to traditional critical practices. But the world of The Nun’s Priest’s Tale is so creative and so quintessentially Chaucerian that critics persist in writing about it.

No one has followed the critical fortunes of Chauntecleer and his companions more closely over time than Peter Travis. One of the most important contributions of this book is his assessment of the tale’s reception. Travis also provides an admirable discussion of genre: his analysis of parody and Menippean satire clarify how to approach works such as this tale that take pleasure in resisting traditional generic classifications. Travis also demonstrates that the tale deliberately invoked its readers’ memories of specific grammar school literary assignments, and the tale thus becomes a miniaturized synopticon of western learning. Building on these analyses and insights, Travis’s final argument is that The Nun’s Priest’s Tale is Chaucer’s premier work of self-parody, an ironic apologia pro sua arte. The most profound matters foregrounded in the tale are not advertisements of the poet’s achievements. Rather, they are poetic problems that Chaucer wrestled with from the beginning of his career and, at the end of that career, wanted to address in a concentrated, experimental, and parapoetic way.

PETER W. TRAVIS is Henry Winkley Professor of Anglo-Saxon and English Language and Literature at Dartmouth College. He is the author of many influential articles and Dramatic Design in the Chester Cycle.

ADVANCE PRAISE: “ Disseminal Chaucer is an original work of criticism that breaks new ground in its treatment of The Nun’s Priest’s Tale in its approach to the tale and in its perspective on Chaucer’s poetry as a whole. It is very historicist based, which places it in the mainstream of current medieval practices, but its background material and authoritative reading will make it fresh and current for a very long time.” — Larry Scanlon, Rutgers University

Posted by Jeffrey Cohen at 2:02 PM

I was already leaning toward getting this book, but your post has pushed me over into the "buy" category.

iWant. By the way, is it quite seemly for a professor of literature, particularly one who has so much to say about pre-modern colonialism, which as we all know was fueled by commodity fetishism, to knowingly activate the consumerist impulses of his audience? What if I like the book so well that I try to annex Dartmouth?

If it hadn't worked so well, I'd be appalled.