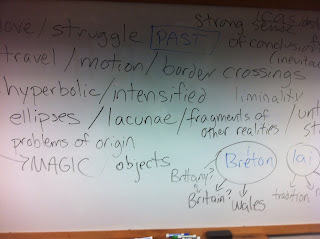 Quickly, because my day is about the advent of an elsewhen.

Yesterday in our Objects seminar we paused, considered the traversed terrain, and drew a retrospective map. You'll remember that this course contemplates objects, agency, and life itself (we are not very ambitious) through medieval texts composed in French and English, by men and by women. Called Breton lais, the genre is not self-evident. I'd structured the seminar to delay contemplation of the traits of these works that have become our arena for experimentation. A bit past midpoint, we looked back to see if at the receding horizon we could now discern the composition of a Breton lai.

Pieces emerged:
an intensification of ordinary life, so that the world burgeons with unexpected possibility * the crossing of cultural and geographical boundaries * the eruption of liminal spaces * a confusion among Briton, Breton, England, Otherworld * a love of the past * the relegation of the past to a textual museum * supercession * fragments of alternative realities * irreducible multilingualism * translation * vivid lives glimpsed in their partiality * a commitment to closure and brevity * events and realms perceived but not fully narrated * mediating angels/latimers/go-betweens on their unselfish missions * a rip tide push towards telos, conclusion * a countercurrent of tarrying, detour, errantry * an English colonization of a British past * a quiet British retort * a world made vibrant through desire * objects that act * things that recede into themselves * magic as a synonym for vibrant materialism * objects as things thrown unexpectedly before us * ceaseless questions of origin * disruptive futurities * struggles over love, meanings, objects, endings

We talked at great length about the difference between deciding the contours of a genre beforehand, then slotting the texts into the scheme they had not created; and allowing a field of alliances to emerge from a grouping of texts that seem to be conversing with each other, as allies and queer families. We then brought this discussion to the constitution of life: what if life (in the form of a life) is emergent rather than determined in advance? Does it not then hold that -- as Jane Bennett has argued -- metals possess a life? Does it not hold (as Kellie Robertson has argued) that premodern objects can never be mute? Indeed, we found a guiding principle in Robertson's essay "Medieval Things: Materiality, Historicism, and the Premodern Object":


Post-Enlightenment common sense encourages us to view things as inert, mute witnesses to the life of active agents, to train our attention on the human subjects who look at, move around, and organize nonhuman things. Premodern things have no such reticence and premodern subjects are often shown to be at the mercy of ‘their’ things. When looking at the premodern thing and its varied representations, the critic’s goal is thus not merely to discover what counts as ‘thing’ as opposed to ‘human’ – what is ‘nature’ as opposed to ‘culture’ – in any given moment, but to search for the pressures that determined how the dividing line between the two got drawn (4).

We search for such pressures, we determined, not through a reading of texts in terms of "objects rather than subjects" (a mere reversal of polarities), but through the mapping of that which perpetually emerges in the laboratories we create when classroom meets medieval and early modern works of experiment.
Posted by Jeffrey Cohen at 9:51 AM